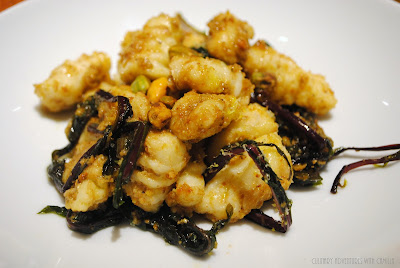 This month the Italian Food, Wine & Travel - #ItalianFWT - blogging group is taking a virtual jaunt to Sicily. Martin at ENOFYLZ Wine Blog invited us to gather around the table and share thoughts about the wines of Sicily. View his invitation and preview: here.

If you're reading this early enough, please join us on Twitter on Saturday, March 4th, 8am Pacific time. Follow the hashtag #ItalianFWT. Take a look at what the Italian Food Wine & Travel bloggers are posting about...

Love for Sicily
I have actually been to Sicily. More than once. I love it and its surrounding islands! When I lived in Rome for a year, after college, I took a week long trip through Sicily and ended up on Lìpari, the largest in a chain of islands in a volcanic archipelago situated in between Vesuvius and Etna. I rented a cottage on a family's farm in Lìpari and was able to see them putting up a tomato harvest for the year. Truly amazing.

Then, a few years later, I returned to Sicily with my husband and some friends and family. We stayed in Palermo then were stranded on Ustica, an island off the northwest coast, for a week. I write 'stranded' because we had only planned to be there for two days; but storms came in and no boats were returning to Palermo. That was one of my favorite travel delays. We had rented a house from a man named Antonio who left us fresh herbs and fresh eggs during our stay. He also sent us off with some salt-cured capers. Before that, I had never seen capers growing in the wild. 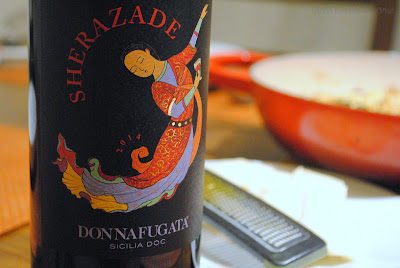 In My Glass...
I've long been interested in tracking down some of Donnafugata's wines. They have done several wine dinners at my favorite local Italian restaurant, La Balena Carmel; but the timing never worked out and I didn't make it to any of the dinners. Boo.

So, when I saw Martin's invitation, I decided to track down some bottles for myself and do my own pairing dinner.

Donnafugata has 3 historic production locales in Sicily: the ancient family cellars in Marsala, where the bottling and aging processes take place; the Contessa Entellina winery, in the heart of western Sicily, with grapes and olive; and the Khamma winery on Pantelleria, volcanic island between Sicily and Africa.

'Donnafugata' is a literary reference to Il Gattopardo, a novel by Tomasi di Lampedusa, and means “donna in fuga” - woman in flight. It refers to the story of a queen who supposedly found refuge in Sicily where the company’s vineyards are located today. Their company's logo is the image of a woman with windblown hair. The wine specific labels are works of art created or inspired by Gabriella Rallo. And wine pays homage to art or literature.


The wine I chose for this is the Italian spelling of Scheherazade: Sherazade. I picked it not just because I wanted a Donnafugata red, but because I love the story of Scheherazade. She is a gifted storyteller and wordsmith. That's my kinda gal. Her husband, the Sultan, had the reprehensible habit of marrying a woman at night and killing her in the morning. So Scheherazade devised a plan: Every night she would craft a story, but wouldn't finish it so that he would keep her alive to hear the ending. Then she would start another one. A thousand and one nights and stories later, he was intrigued enough to keep her!

And we just happened to attend a performance that included three movements from Russian composer Nikolay Rimsky-Korsakov's symphonic suite Scheherazade. The conversational exchange between the orchestral instruments was a beautifully dramatic tour de force. So, it was perfect timing. 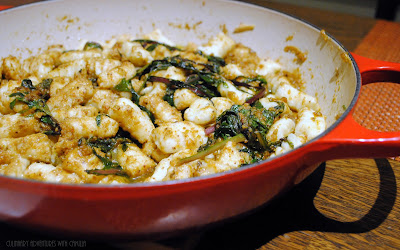 On My Plate...
Looking at regional dishes, I found a Sicilian tradition of making a sauce out of pistachios. I couldn't wait to try it. So, I had my Enthusiastic Kitchen Elf help me roll some homemade ricotta gnocchi and added in some bitter dandelion greens from a local farm. What a delectable dinner! 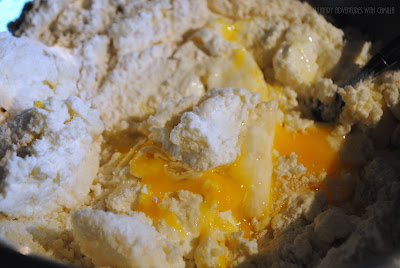 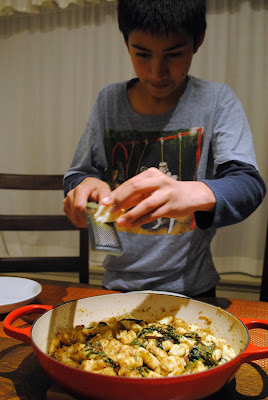 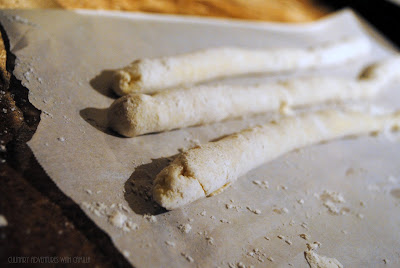 Shape dough on a parchment-lined surface with lightly floured hands. 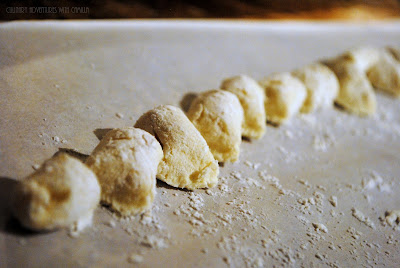 Roll into 1" ropes and cut crosswise into 1" pieces with a lightly floured knife to form pillow dumplings. 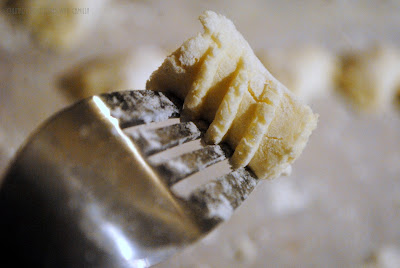 To form the gnocchi, press a piece of dough onto the tines of a fork. Use your thumb to create a dimple in the top of the gnocchi. Roll the dough down the tines to create gnocchi's signature indentations. 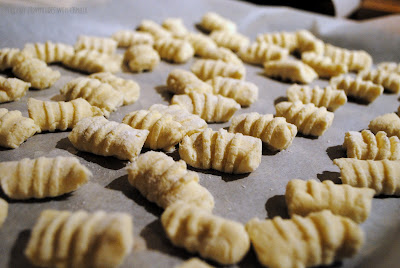 Place on a parchment-lined baking sheet until you're ready to cook them.

Sauce
Blanch the pistachios and garlic, then place them in the bowl of a food processor. Blitz the parboiled nuts and garlic with zest and juice from 1 lemon and ¾ C olive oil until a thick paste forms.

In a large, flat-bottom pan heat 1 T olive oil and  wilt the dandelion greens. Add in 3 to 4 T of the pistachio pesto and 1/4 C water. Whisk the water and pesto until a smooth paste forms.

Finish
Cook gnocchi in a few batches in a pasta pot of boiling salted water with a splash of olive oil. Add a few to the pot at a time, stirring occasionally. When they float to the surface, they are finished. Lift out with a slotted spoon and drain in colander. 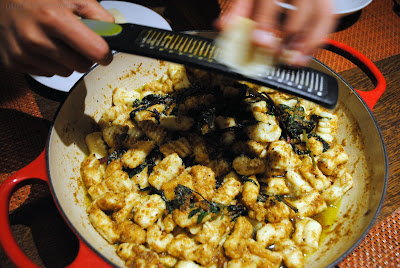 Place the cooked gnocchi into the pan with the pesto. Once all the gnocchi are cooked, toss to coat them in the pesto. Grate fresh cheese over the top. 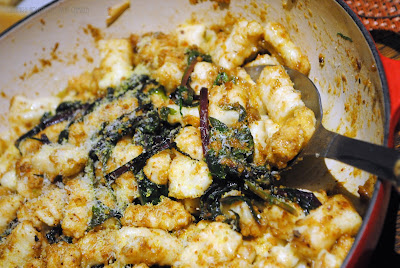