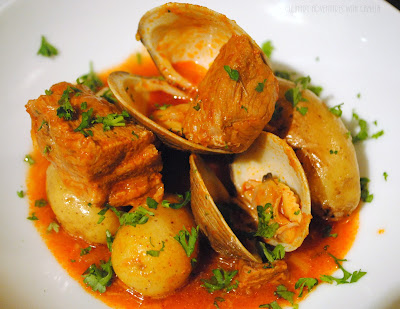 I am so excited about this month's Food'N'Flix event hosted by my friend Wendy over at A Day in the Life on the Farm. You can read her invitation: here. She asked us to watch The Martian.* It is one of my family's favorite movies. Ever.

My family and I went to the theatre on opening night because we had all read Andy Weir's book and loved it. We went back and saw it a second time in the theatre. And I pre-ordered the DVD, so we received that the day it was released. I would guess we've watched it over a dozen times. Still, when I knew Wendy was having us watch this with a foodie-lens, I watched it again, this time with a pad of paper in my hand. By the end of the movie, my list read: Potatoes, Mac & Cheese, Beef Goulash, Meatballs in Tomato Sauce, Vegetarian Soup, Beef Stroganoff with Noodles, Sweet & Sour Chicken, Beef Teriyaki, Vegetable Stew, Meatloaf, Potatoes, Potatoes, and More Potatoes.

On the Screen...
As I've already said, my husband, our two boys, and I just adore this movie. I see it as a two and a half hour love letter to science, innovation, ingenuity, and problem-solving. In a nutshell, astronaut Mark Watney is left on Mars after his team thinks he perished. The movie is about him surviving on Mars and - spoiler alert! - his rescue.

In a recorded message, he talks about the hazards of his situation, "If the oxygenator breaks down, I'll suffocate. If the water reclaimer breaks down, I'll die of thirst. If the hab breaches, I'll just kind of implode. If none of those things happen, I'll eventually run out of food and starve to death. So, yeah... Yeah...."

His conclusion is one that my husband and I say in hushed tones because we don't really want the kids repeating it: "In the face of overwhelming odds, I'm left with only one option, I'm gonna have to science the shit out of this."

And 'science the shit out of it' is what he does. Again and again and again. He tells the astronaut candidates in his class: "At some point, everything's gonna go south on you... everything's going to go south and you're going to say, this is it. This is how I end. Now you can either accept that, or you can get to work. That's all it is. You just begin. You do the math. You solve one problem... and you solve the next one... and then the next. And If you solve enough problems, you get to come home."

To be honest: I was thrilled when my kids walked out of the movie theatre talking about how smart Mark Watney was and how cool it was that he knew and could apply all that science and all that math. Yep, a scientist is definitely one I want my kids to emulate. No need for superheroes when you have mad geniuses around, right? 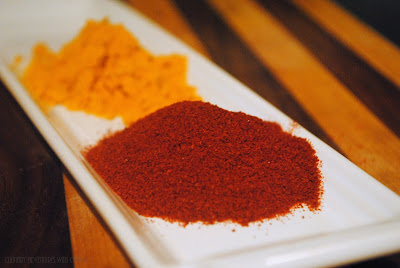 On the Plate...
So, I've already made Martian Potatoes and decided that I really didn't want to make anything that was strictly made from potatoes though that was an obvious choice. Instead, I looked elsewhere for inspiration. And in the end, I was inspired by the red rocks and red sand of the Acidalia Planitia. That brought me to paprika. Lots and lots of paprika. 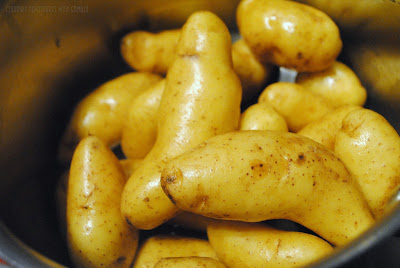 I did include a few potatoes for good measure, but these weren't grown in - ahem! - poop. Gotta say, though, I loved that line in the movie: "Yes, I did in fact survive on a deserted planet by farming in my own shit."

I searched for a new-to-us recipe that included lots and lots of paprika. I found it in a traditional Portuguese dish... 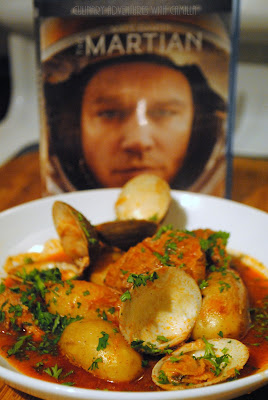 Of course, I adapted it to make it my own with some central California flair and fresh produce; this isn't completely tradition. But I will say that this dish was a huge hit with my boys. Huge! They asked when we can make it again...and watch the movie, too. 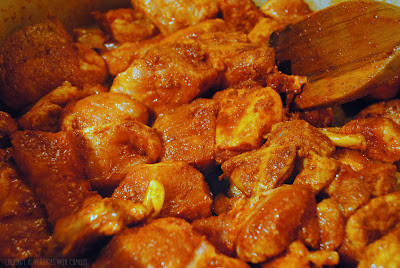 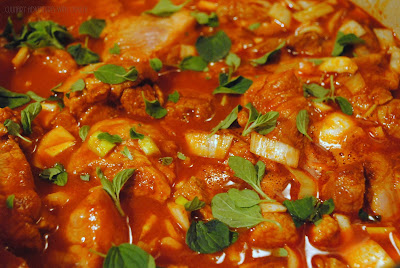 Procedure
In a bowl, make a paste with the paprikas, turmeric, garlic, and 2 T olive oil. Place the pork cubes into a deep bowl. Add the paprika and garlic paste to the pork and massage it into the meat with your fingers. Add in the bay leaves and vinegar. Cover the bowl and allow to marinate between 8 and 24 hours. The longer the better! Massage the meat every 4 to 6 hours. Let the meat come to room temperature before you start cooking.

Heat 3 T olive oil in Dutch oven or other deep pot with a tight-fitting lid. Add in the marinated pork, setting aside the marinade for later. Brown the pork on all sides in a single layer, cooking it in batches if needed. Once all the pork has browned, reduce the heat to medium low and toss in the onion and and allow it to brown slightly, approximately 2-3 minutes.

Pour in the wine and deglaze the bottom of the pan. Stir in the tomato paste and the rest of the pork marinade. Let it simmer for at least 10 minutes.

Add the pork back into the pan; the pork should be mostly covered in the sauce. If it needs more liquid, add in some chicken stock or water. Stir in the fresh oregano leaves. Bring the liquid to a boil. Reduce heat to low and cover with a lid. Allow the meat to braise for 1 ½ hours to 2 hours.

Once the pork is tender, bring the liquid back up to a gentle boil. Add the clams to the pot, nestling them in between the meat and mostly covered by the sauce. Cover and cook an additional 20 minutes.

While the clams are steaming in the pork and sauce, prepare the potatoes. Start with boiled potatoes that are easily pierced with a fork, but still firm.

Melt butter in a skillet. Add in the potatoes and cook until golden brown all over, approximately 5 to 6 minutes.


To serve, please a few potatoes in a shallow bowl. Ladle the pork, clams, and sauce over the top. Add wedges of lemon and cilantro leaves for garnish and serve with crusty Portuguese bread. Bom apetite! 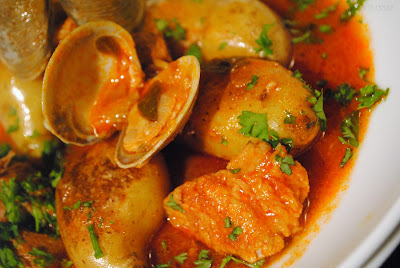 If you're a food blogger and inclined to join us for Food'N'Flix, please do! We have a lot of fun and eat great food along the way. You still have time to join us for The Martian as Wendy has set the deadline for March 30th.