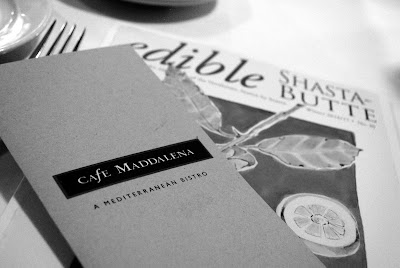 Years ago, a friend asked if I had ever been to Café Maddalena in Dunsmuir. Nope. I filed it away as a 'must try' if we ever came close. And, last night, we were only six miles away; well, truth be told, I booked our hotel for this leg of the trip based on going to this restaurant!

When we rolled into town, I called, made a reservation for dinner, loaded up the boys back up in the car, and headed out in the pouring rain. I'm so glad we did...you know it's going to be good when they have a display of Edibles at the front door!! 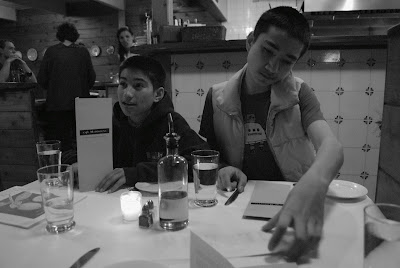 I always love seeing the waitstaff's dubiousness about two kids in their restaurant dissolve as soon as my boys open their mouths. "Mom, they have tripe! I have to try the tripe," gushed R, when he saw the Special board. Back, when he was in 5th grade, and they were studying the human body, his teacher - our beloved Mr. Spedding! - brought a cleaned cow's stomach, and they cooked and ate tripe. It's been one of R's favorites ever since. And, whenever he sees it, he orders it. 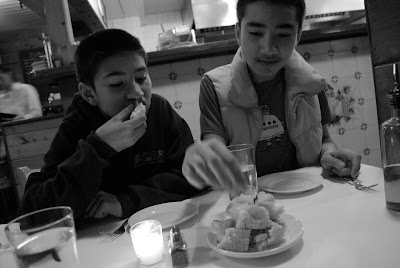 Their homemade focaccia was pillowy soft with just the right amount of flavor from fresh rosemary and salt. I tasted one piece. The boys polished off two plates' worth. 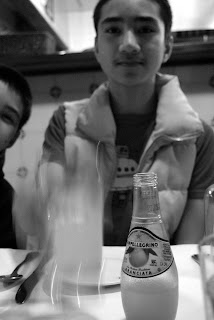 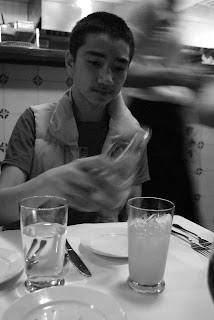 They had two kinds of San Pellegrino which made the boys happy. And Jake and I ordered a single varietal red wine by the glass. We picked a Mourvèdre. Like R with tripe, whenever I see that on the wine menu - and not part of a red wine blend - I order it. We were celebrating an early anniversary, but with the crazy storm, neither of us wanted to be out driving after wine. So, I had two sips and he enjoyed the rest. Their pour was generous! 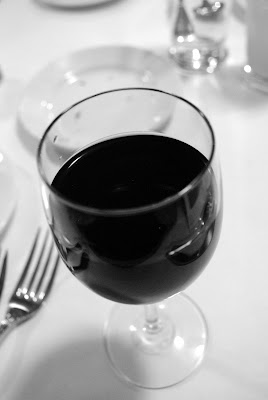 Here's my Precise Kitchen Elf and his tripe. Our server placed it in front of him and he was in heaven. He did share a few bites with all of us. 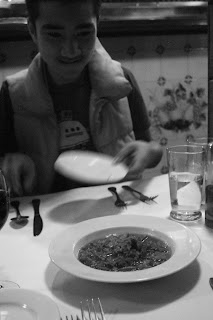 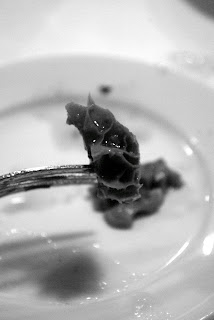 Though the seasonal menu looked amazing, the evening's specials were too good to resist. So, literally, we ordered one of everything. That included a Meyer lemon soup, in the style of Greek Avgolemono; the tripe; and roasted duck over sweet and sour red cabbage with green beans. And off the regular menu, Jake also ordered their grilled beef tenderloin with salmorejo sauce, crispy potatoes  and chorizo stuffed piquillo pepper. Dylan had to get their red onion and olive pizza with housemade sausages and mozzarella di bufala. 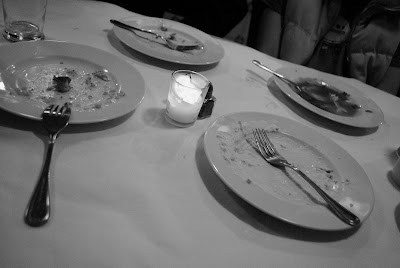 I don't typically order dessert - I just steal bites from theirs - because I don't have a very robust sweet tooth. But they couldn't decide on which three desserts to get. All four it was! Chocolate marquise with raspberry sauce; pistachio cake with cardamom ice cream; mixed citrus tart with almond cream; and caramelized honey cheesecake with apple compote. 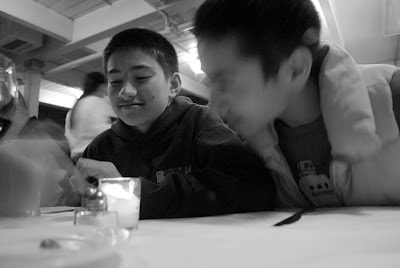 What a dinner! What a restaurant! Thank you, Cat, for the recommendation. We had a fabulous early anniversary dinner. Seventeen years with this man.

Jake looked at the empty plates and asked, "Well, this was a great meal to kick-off our vacation. How do you plan to top it?" I guess I'll be cooking for the rest of the week because we aren't going to find many restaurant meals to to this. 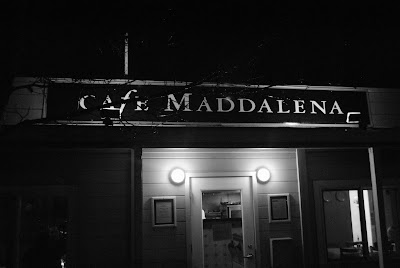 We don't often find ourselves in this part of the state. But, when we do, we'll definitely be back. And, should you ever find yourself in Dunsmuir, Café Maddalena is worth it!