Banished with my Durian! 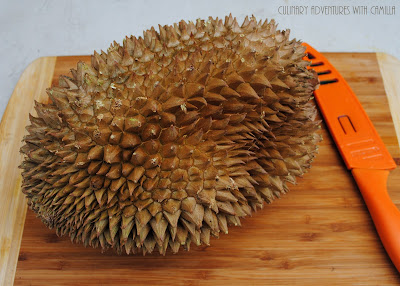 I haven't had a chance to post this. It's been a busy week! But two Fridays ago, I brought a durian to school for my Bizarre Foods SEM.

Are you familiar with durian? No, I did not murder a hedgehog, as a friend initially thought when she saw my photos.


The durian whose name is derived from the Malay-Indonesian languages word duri for "spike" is distinctive for its formidable, spike-covered husk, its noxious odor, and its distinctive flavor. Did you read: noxious odor?! The fruit emits a distinctive smell that is potent even through its armor. Some people regard the durian as sweet-smelling; others find the aroma overpowering and revolting. My class and I thought that, perhaps, it's similar to cilantro where some people like it and others think it tastes like soap.

In any case, it does have a distinctive smell. So, back to my banishment. I had posted a photo of the fruit on Facebook the night before class and a friend, who works at the school, must have given the administration a head's up. Because when I showed up to class, there was a table set up outside and the operations manager came into the staff lounge where I teach. "We set up a table for your durian outside. Okay?" Okay. 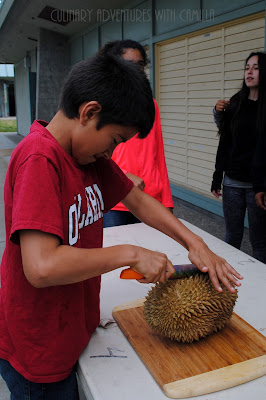 My Enthusiastic Kitchen Elf did the honors. Another gal who was teaching in the library across from us stuck her head out of the door. "I knew you had just cut into it! I can smell it," she said. Then she asked to try it. 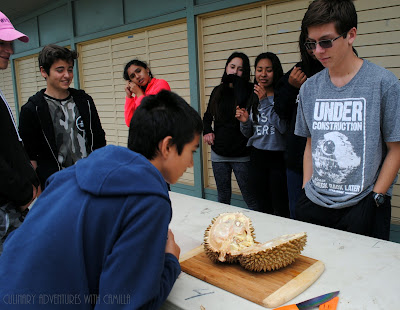 Forewarned by a friend who teaches culinary arts at the high school level, I told the kids not to expect a sweet fruit, but to think about it like caramelized onions. 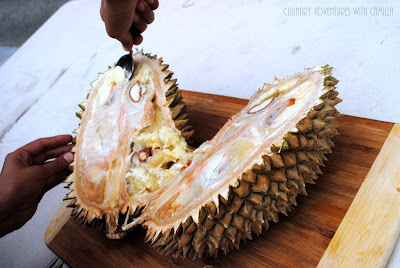 They scooped. They sniffed. 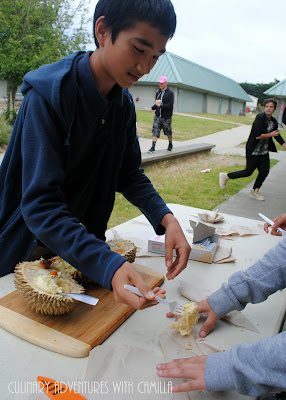 And they, with trepidation, nibbled. 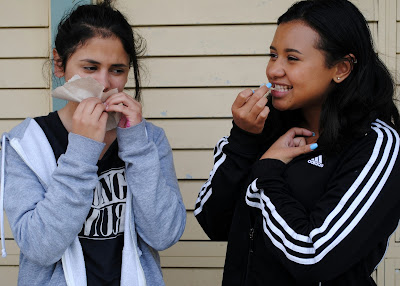 I have a dozen students. I think two were not brave enough to try it. But those who did actually admitted: "It wasn't as bad as I expected!" It was not as bad as I remembered. Phew. 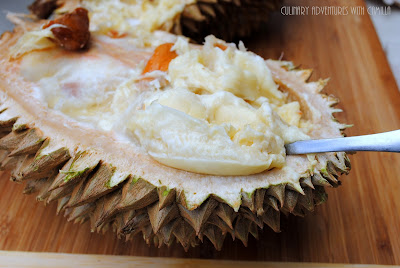 It was quite a spectacle. Funny story about the principal of the school who used to live in Singapore. R had gone into the front office. "Does anyone want to try a durian? We're eating it in the Bizarre Foods SEM."

Mrs. Allen leaped out of her chair and ran out of her office, "It's not in the building, is it?!?!" With relief, she saw that we had been banished outside. Visibly relaxed, she came out and talked about having tried it in Singapore. But she wouldn't try any.

"Good job, though, kids. I'm proud of you for being so adventurous!" she congratulated them. Once in her lifetime was enough, I guess. I was actually thinking the same thing, but decided that it probably was bad form for me to expect them to try it and me not to try it. And, like the kids, it was not as bad as I thought it would be. It wasn't as bad as I remembered! 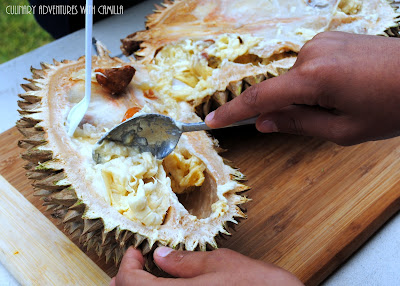 What do you think? Have you tried durian? What did you think?