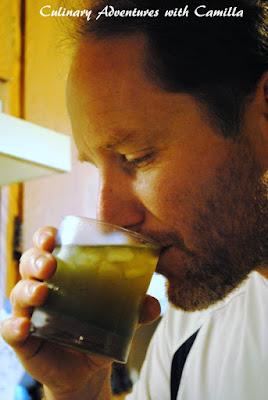 Let me explain: I know that my husband ate before he met me. He must have cooked, too. But in the seventeen years that we have been together, he has only cooked (not counting the grill) a handful of times.

Let's see...seventeen and a half years. That's over 6300 days. Three meals a days. That's almost twenty thousand meals. And he's only cooked five of those. Maybe. But it's not because he's unwilling; it's because I'm territorial. I've eased into letting the Kitchen Elves in. But Jake doesn't come in unless I'm too sick to stand in front of the stove!

So, while we were unpacking from our 10-day camping trip, I was downloading photos and shuffling laundry. He and the boys had Alton Brown's Good Eats going on Netflix.

"Do you have bourbon?" I heard him ask.

"Do you have sugar?" he continued.

"Do you want a mint julep? Alton Brown just showed me how to make one."

Jake's Mint Julep
Click for Alton Brown's recipe: here. Unlike me, my husband can follow a recipe. Exactly. 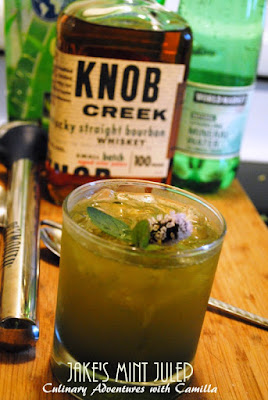 And while he can follow the recipe, he did end up deviating for the second cocktail. He didn't think the drink was minty enough as written. Here's his slightly adapted version, AB-inspired. 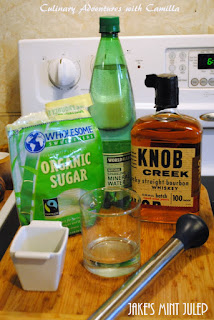 
Procedure
Combine mint leaves and sugar in an old-fashioned glass. Muddle together so that the mint releases its oils but is still green, approximately 1 minute. 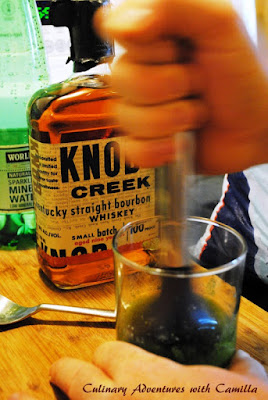 Add in the bourbon - that "a jigger and a pony's worth" if that means anything to you! I guess I need to watch that episode of Alton Brown's show - and set aside for several minutes. 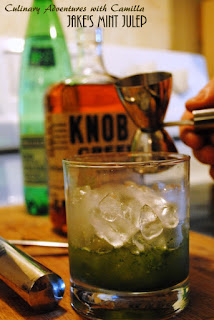 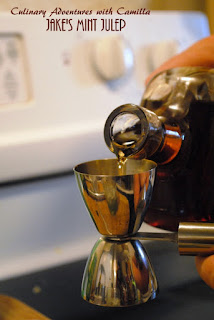 Pound ice with a rolling pin to crush slightly. Fill the glass with ice and top with a splash of sparkling water. 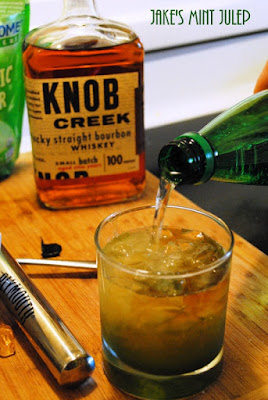 Stir and garnish. Serve immediately. It was a tasty drink. I think I'll have to have Jake make me another one soon.