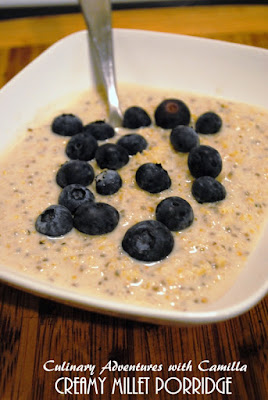 It's time for Group B's July 2015 Secret Recipe Club reveal. This month I was assigned to Fit Mama Real Food which is written by Heather. She's wife to Jacob, mom to Hunter and Zoe, real food lover, crazy crafter, and group fitness instructor. And she has some really delicious looking recipes.

I am definitely going to try her Crusty No Knead Dutch Oven Bread (I am all about no-knead breads!), Chicken Kebab Salad, Pomegranate and Almond Butter Deep Dark Chocolate Brownie.

But, for this month's SRC reveal, I decided to make Heather's Creamy Millet Porridge. Serendipitously, I had just ordered some grains from Bob's Red Mill when I found Heather's recipe. And millet was in my order! 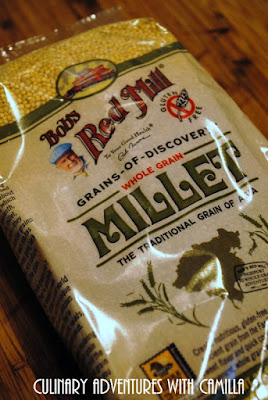 Given that I've never cooked with millet - and really no idea what I wanted to do with it when I placed the order at Bob's Red Mill - this was the perfect introduction to it!

In case you're unfamiliar, millet is an ancient grain that has been cultivated in Asia as far back as 10,000 years ago. Surprisingly, cultivation of millet was more prevalent than even rice, during prehistoric times, particularly in what is now China and the Korean peninsula. By 5000 B.C. its use had spread to Europe. And, today, it's used as a food source all over Africa for its resistance to drought.

Millet's protein structure is remarkably similar to wheat with one major divergence: it's a non-gluten grain. So many people with gluten-intolerance substitute millet flour in bread recipes.

I have to admit that my boys - including the big one - weren't sold on millet. It's toothier than they like...even moreso than steelcut oats. 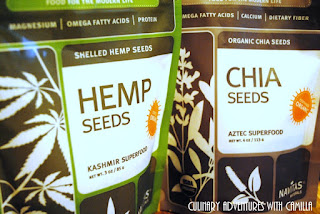 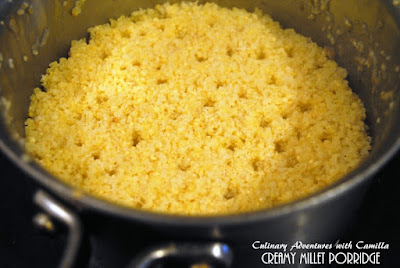 In a small saucepan, over medium heat, combine all ingredients - to the vanilla extract. Bring to a very low simmer and allow the liquid to absorb into the millet.

Once the millet is to your desired creamy texture, slowly whisk in the egg.  Cook and continue to whisk until egg is cooked, approximately 2 to 3 minutes on a low simmer.   Add more milk if needed.

Serve with a drizzle of maple syrup and a sprinkle of blueberries. Or top with your favorite porridge toppings.