Weekends in a French Kitchen: Langoustines with Armagnac 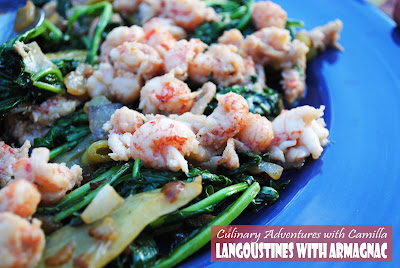 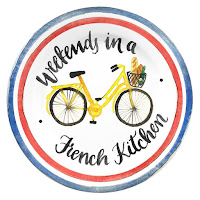 Weekends in a French Kitchen (click to read about the project: here) launched this month.  And if you're game, I'm including affiliate links to the cookbooks at the bottom of the post. Yesterday I posted from Daniel Boulud and Dorie Greenspan's cookbook. Today marks my second post from Mimi Thorisson's A Kitchen in France: A Year of Cooking in My Farmhouse.

Special thanks to the project organizers: Alice of A Mama, Baby and Sharpei in the Kitchen, Christy of Confessions of a Culinary Diva, Tammy of Telling Stories from Chez Nous, and Emily of Blue Bungalow. What a fun, fun project they have designed. Join us.

Langoustines...
Langoustines, or langostino as they are labeled here in California, are crustaceans commonly called 'squat lobsters', though they are more closely related to hermit crabs than lobsters. But you can easily substitute heads-on shrimp or prawns...or even crayfish or crawdads if you can find them.

Catching crawdads is a family favorite... 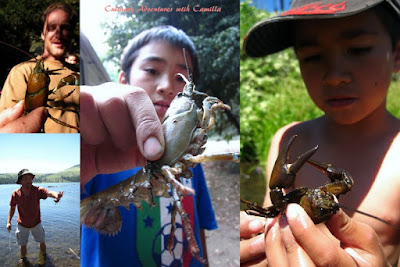 ...we normally just boil them and eat them with a squeeze of lemon and some melted butter. 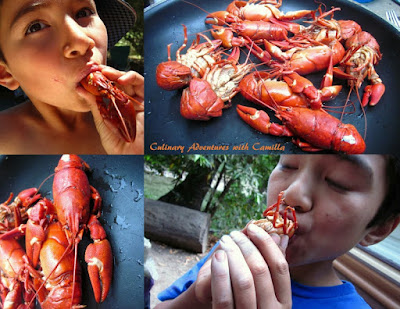 Here's a Cajun Legend, about how crawfish are descendants of the Maine lobster and came to populate New Orleans. 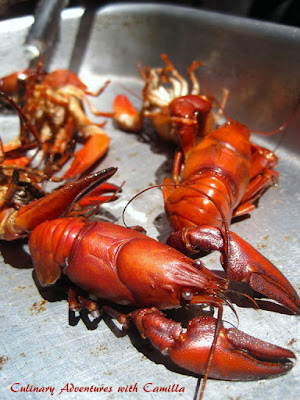 I didn't have a chance to make it to the river this week, so instead of fresh crawdads, I picked up some langostino tails from the store to make Mimi's Langoustines with Armagnac. 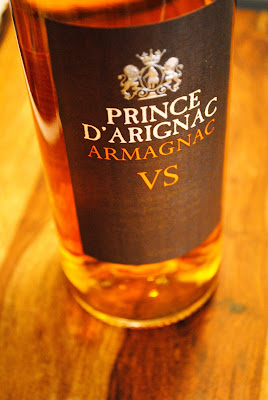 My Thoughts...
My langostino tails came already shelled. So, to make the plate look more full, I put them atop of bed of caramelized onions, banana peppers, and arugula. Jake had fun setting it aflame and the boys thought it was great that our dinner was on fire! I didn't get a great photo of it, but it was fun! 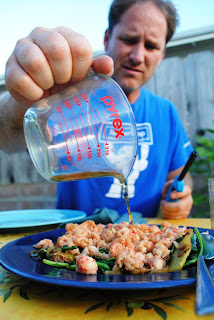 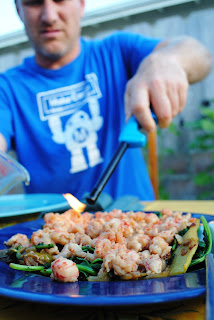