By Camilla M. Mann July 14, 2014
Quatorze Juillet! July 14th is often thought of as France's Independence Day. More accurately, though, it's French National Day — called La Fête Nationale in French — and commemorates the day, in 1789, when crowds stormed the Bastille, a fortress used as a prison in Paris. The event marks the beginning of the French Revolution.

I wanted to make something French for dinner - and fast. I still had to meet a deadline after all. I finally decided on croque madame. The croque monsieur, is a ham and Gruyère sandwich slathered in cheesy béchamel; a croque monsieur becomes a croque madame when a fried egg is placed on top of it. 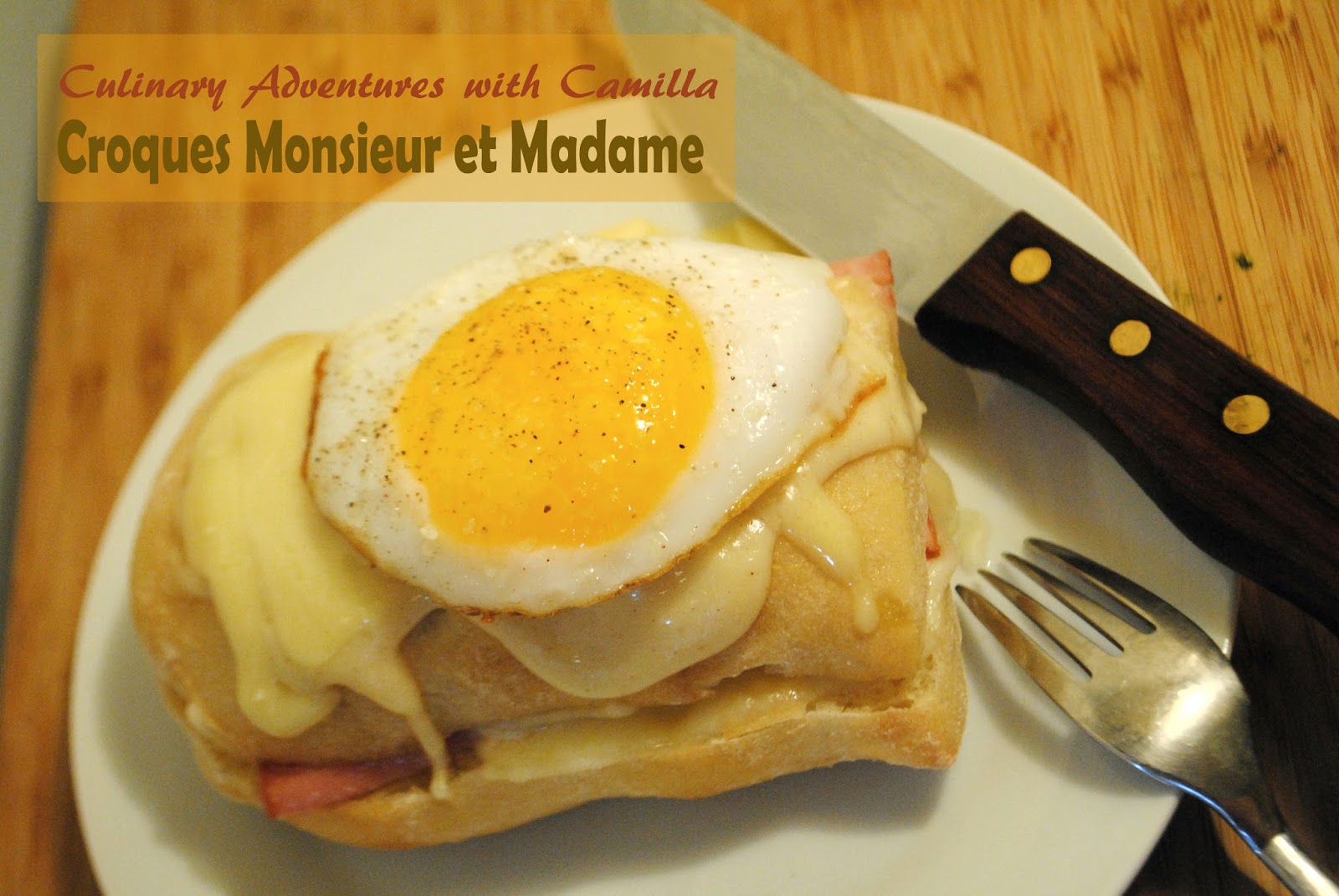 "What does that mean, Mommy?" asked the Lil' Wom.

Croque Monsieur is something like 'crunchy mister.' And Croque Madame is 'crunchy missus.'

"I get why it becomes a girl when you put an egg on top."

[Deep breaths.] Okay. Why does it become a girl when you put an egg on top? [Am I going to regret asking this?]

The boys wanted monsieur  - not sure if the ovary comment was deterring them or not - and Jake and I had madame. That was easy. Half and half.


Procedure
Make a béchamel sauce by melting butter in a saucepan over medium heat. Whisk in flour and cook, until smooth, approximately one minute. Whisk in cream and milk. Bring to a boil, then reduce heat to medium-low and simmer until slightly reduced and thickened, approximately six or seven minutes. Add ½ cup grated Gruyère and the parmesan, and whisk until smooth. Season to taste with salt, pepper, and nutmeg.


Heat broiler to high. Place bread - sliced in half - on a parchment or foil-lined baking sheet. Spread 1 T mustard on one half. Top each half with Gruyère and a slice of ham. Broil until cheese begins to melt, approximately one to two minutes. Smear some béchamel on one side of the sandwich. 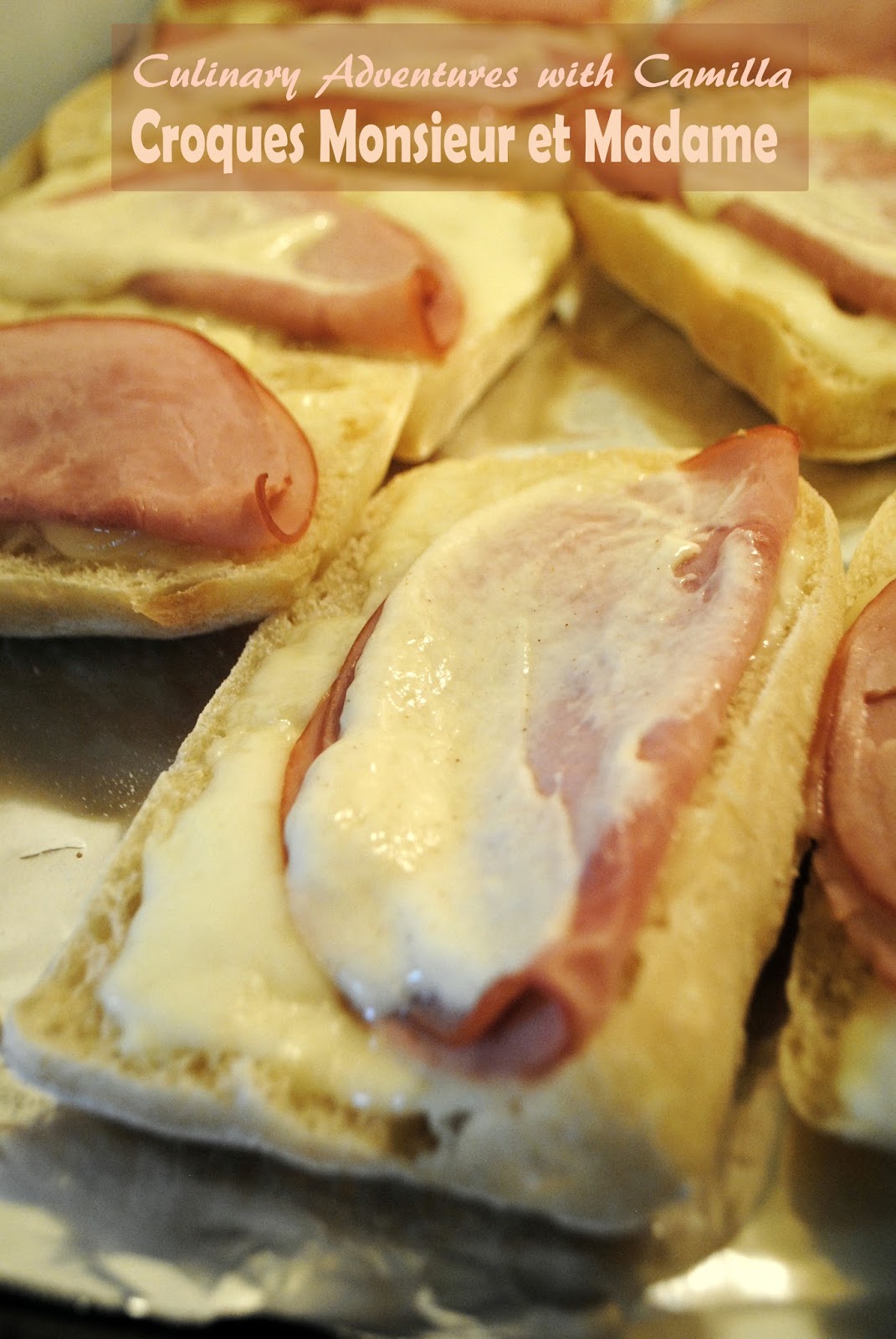 Close the sandwich. Top of each sandwich with another smear of béchamel and slices of Gruyère. 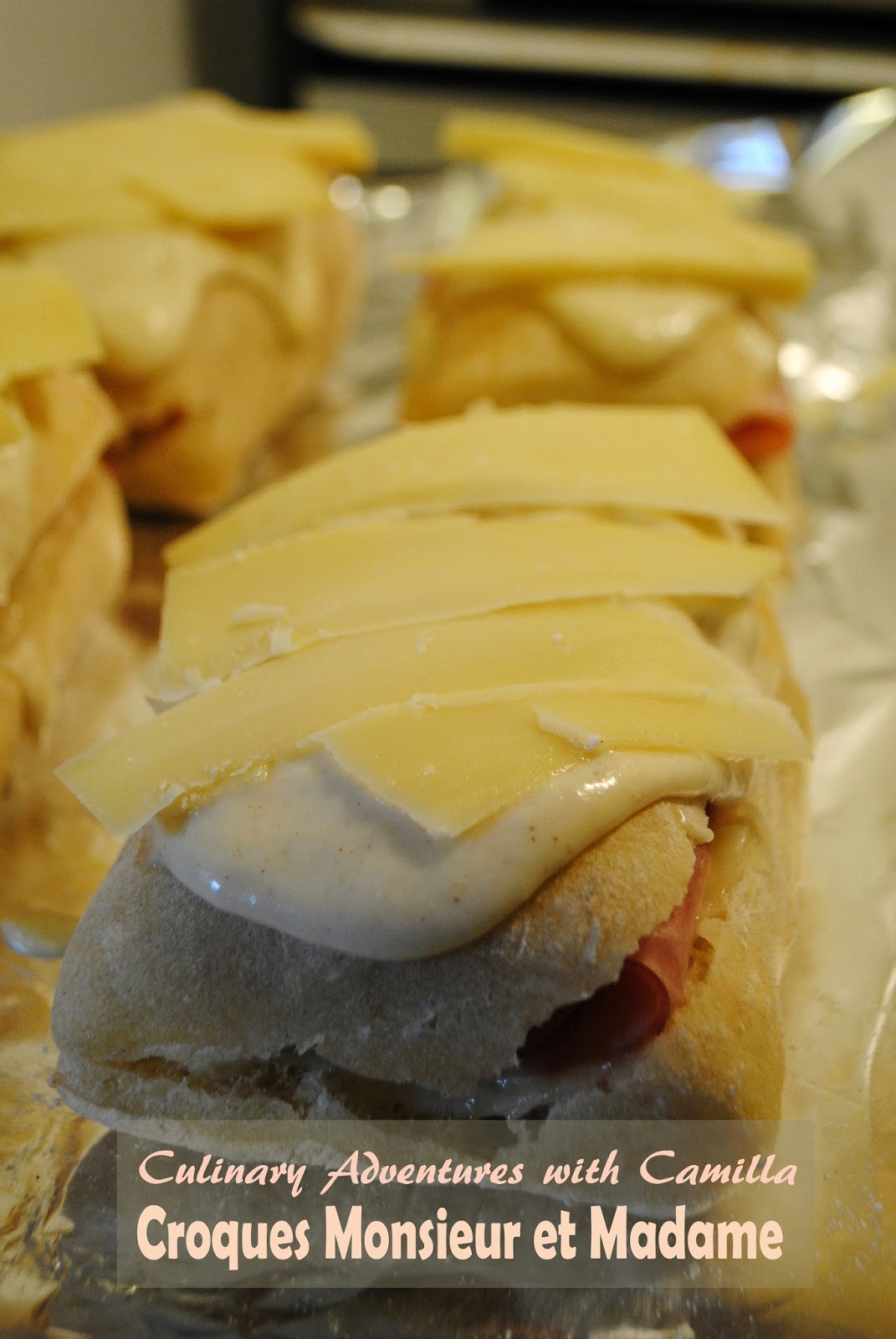 Return to the oven and broil until cheese sauce is bubbling and evenly browned, approximately two to three more minutes. That's it for the Croques Monsieur... 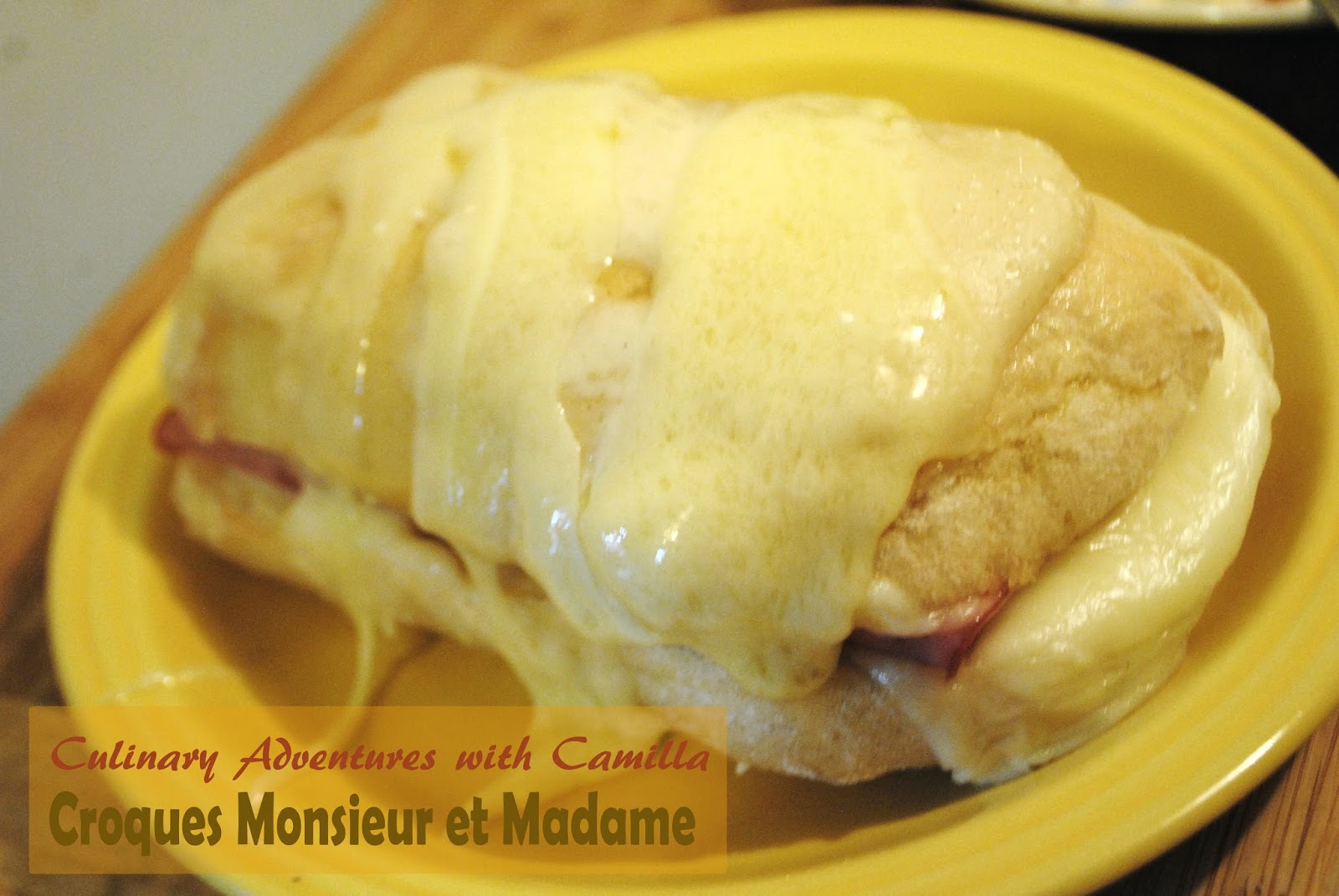 Heat oil in a skillet over medium heat. Add eggs, season with salt and pepper, and cook until whites are cooked but yolks are still runny, approximately four to five minutes for the larger duck eggs. Place an egg on top of each madame, and serve hot. 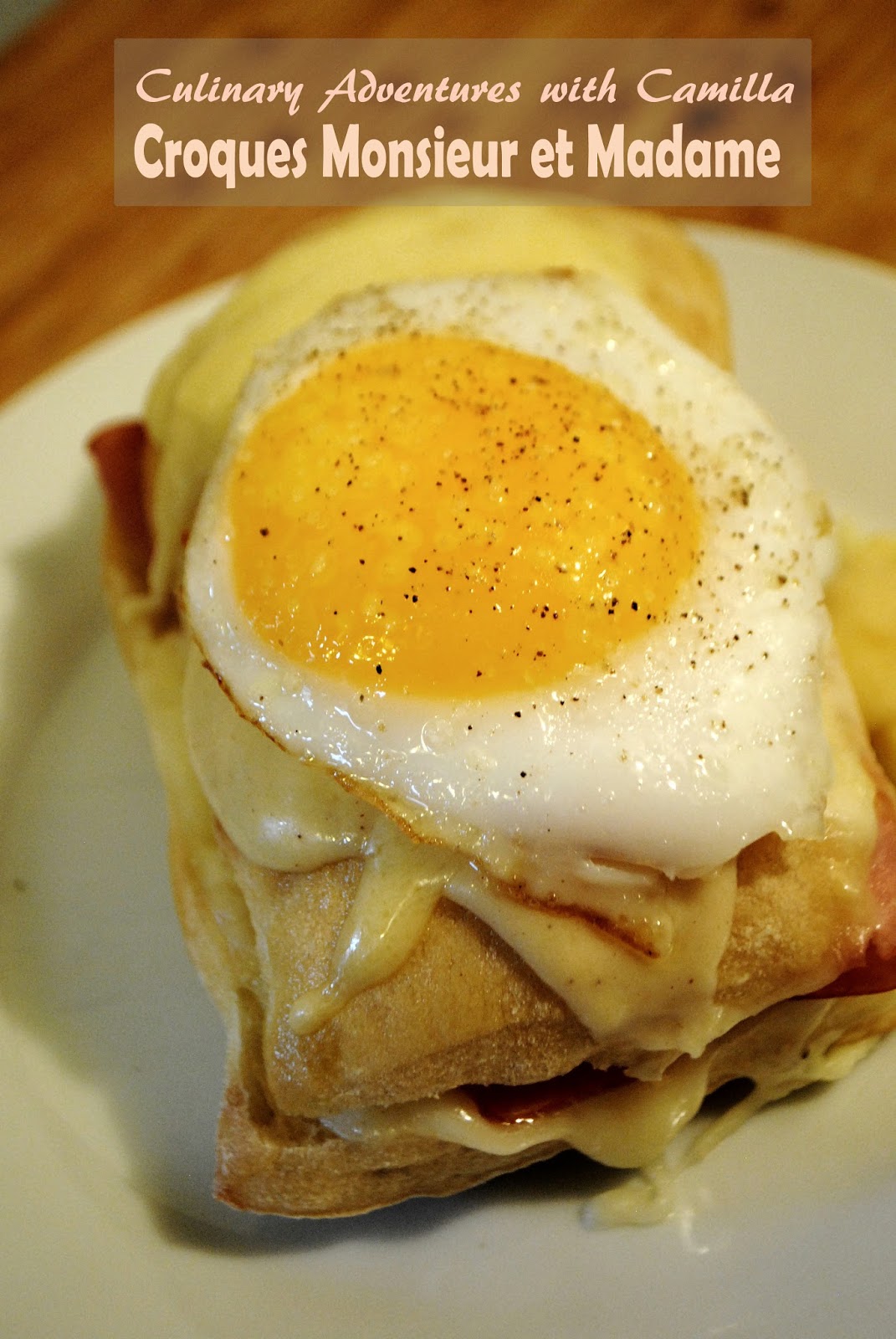