Cooking Around the World: El Salvador 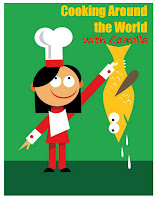 We're blazing through the 'E' countries in our cooking around the world adventure with a stop, tonight, in El Salvador.

Here are some fun facts about El Salvador...

El Salvador is the smallest country in Central America, but it has the largest shopping mall in all of central America!
El Salvador’s currency is the US dollar, and it’s been like that for over 10 years.

El Salvador is one of the most popular surfing destinations in the world hosting tons of surf competitions yearly.

Out of all the Central American countries, it’s the only that doesn’t have a Caribbean coast line.

El Salvador is known to have some of the most active volcanoes in Central America.

And, unlike most of our virtual travel, we actually have had authentic Salvadorean food, so it was just a matter of replicating it. Dylan said that I did a good job. Success!

Here's what I made: pupusas - one with a kale and potato filling and one with a shrimp and loroco flower filling - topped with a special Salvadorean white sauce and a side of curtido salvadoreno. 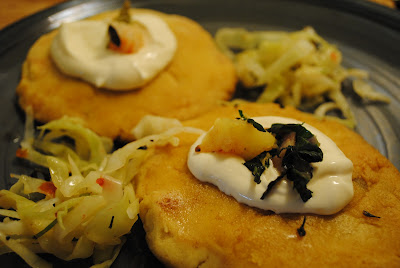 In a large bowl, mix together the masa harina and water. Knead to make a moist, yet firm dough; it should not crack at the edges when you press down on it. Cover and set aside to rest for 5 to 10 minutes.

Roll the dough into a log and cut it into 8 equal portions. Roll each portion into a ball.


Make an indentation in each ball with your thumb. Spoon about 1 tablespoon of the filling into the indentation and fold the dough over to completely enclose it. Press the ball out with your palms to form a disc. Make sure that the filling doesn't spill out.


Heat a greased skillet over medium-high flame. Cook each pupusa for about 2-3 minutes on each side, until lightly browned and blistered. Remove to a plate and hold warm until all pupusas are done. Serve with curtido. 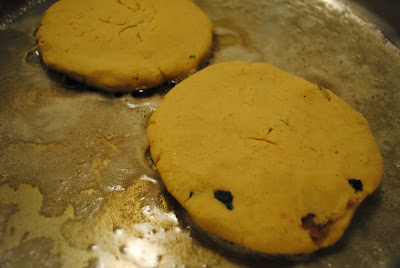 Blanch the cabbage with boiling water for 1 minute. Discard the water. Place the cabbage in a large bowl and add all other ingredients. Place in the refrigerator for at least 2 hours before serving.

We're heading to Equatorial Guinea next...