Cooking Around the World: East Timor 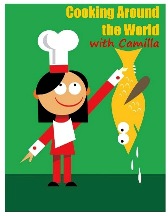 We kicked off our journey through the 'E' countries of the world with a culinary adventure in East Timor and traveled by tabletop with steaming bowls of bakso komplit (an Indonesian meatball soup). 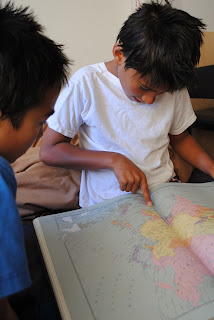 Timor, an island in the Indonesian archipelago, is located about 400 miles northwest of Australia between the South China Sea and the Indian Ocean.

East Timor was a Portuguese colony until 1975 when Portugal dissolved all of their colonial holdings. But nine days after being released as a colony, East Timor was invaded by Indonesian forces; it didn't become a sovereign nation until 2002. 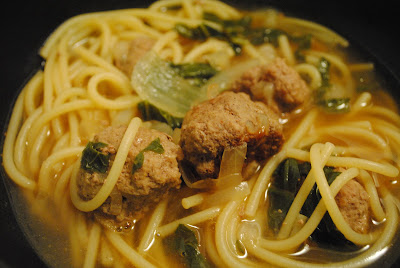 I found numerous recipes for bakso (meatballs), using them more as a jumping off point than a real recipe. Some used chicken and some used beef. Some included greens, usually bok choy. Some used noodles and and some used dumplings. 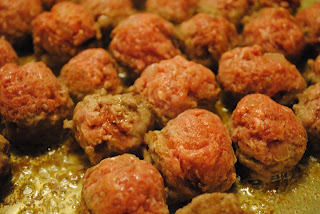 In a large soup pot, I brought 8 C of chicken broth to a boil with 1 sliced onion. Then I reduced it to a simmer for 45 minutes. In the meantime, I made meatballs - 1 pound of 96/4 organic, grass-fed beef; 2 sliced shallots, caramelized; 1 egg; 1 t minced garlic; 1/4 C white whole wheat flour; 1 T ground cumin; 1 t ground nutmeg; 1 t sesame oil - and browned them in a large flat-bottom pan until cooked through.

Add 2 C thinly sliced greens to the broth and cook for 10 minutes. I used the kale from my High Ground Organics CSA box. Cook noodles in the broth mixture. I think they typically use ramen-type noodles. I had spaghetti. When the noodles were cooked, I added in the meatballs and simmered it all together for another 5 minutes. 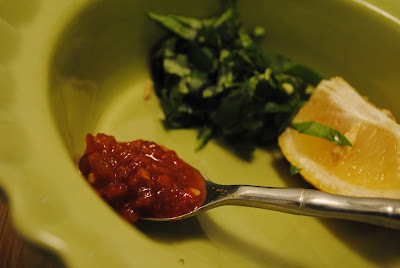 When I served the soup, I served it with a garnish of fresh lemon, sliced basil, and a small spoon full of chili-garlic sauce. Delicious!

This Global Table Ambassador is signing off for now. We're off to Ecuador next. Stay tuned...