Cape Verde: Cooking Around the World with Camilla

Back in the cooking saddle after being completely pampered at Lokal's Supper Club last night, we traveled to the Cape Verde islands via tabletop tonight with two savory dishes and one sweet.
Cape Verde is an archipelago comprised of ten islands off the coast of western Africa. Before being discovered by Europeans in the mid 15th century, the islands were uninhabited; then they became a Portuguese colony and a stronghold in the Trans-Atlantic slave trade.
The Cape Verde cuisine is mostly based on fish, beans, and rice. And in that vein, I selected Jagacida, a traditional Cape Verdean recipe for beans and rice flavored with smoked paprika, and Caldo de Peixe, a one-pot stew of fish cooked with a mixture of fruits and root vegetables. 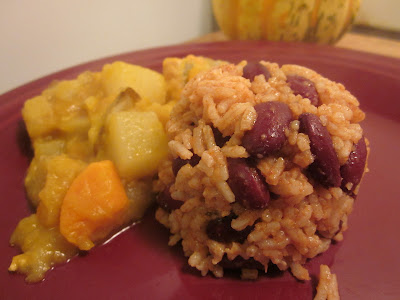 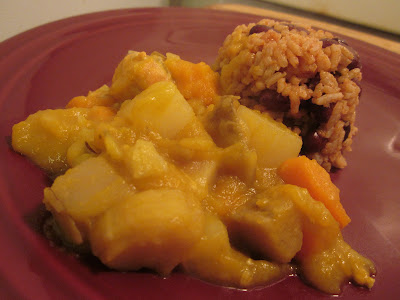 Add a little oil to a large pot and cook the onions and garlic until browned and aromatic. Add the bay leaves, breadfruit, potatoes, sweet potatoes, plantain, and butternut squash. Cook for 5 minutes, stirring constantly. Pour in the broth and bring to a boil. Reduce to a simmer and cook until everything is soft. Lay the cubes of fish on top of the stew, cover, and steam until cooked. Gently fold the fish into the stew and serve hot, over rice and beans. 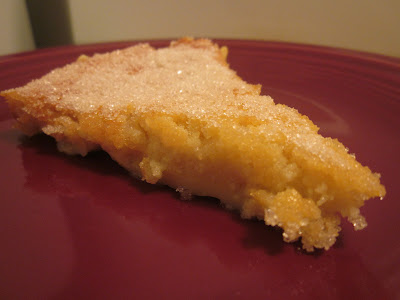 Place the sugar and water into a saucepan. Bring to a boil. Cook over medium heat until a thick syrup forms, approximately 5 minutes. Whisk in the goat cheese until it is melted and the syrup is milky. Let cool slightly. Then whisk in the eggs, one at a time. Pour mixture into a buttered baking dish and bake in a 350 degree oven until the custard is set. Cool. Slice into wedges and sprinkle with more sugar before serving.

Enjoy my tabletop travels. Join me in whipping up a dish or two. If you cook do cook a recipe from one of these countries, I'd love to hear about it. Feel free to comment on the posts themselves or email me at constantmotioncamilla at gmail dot com.

This Knight of the Global Table Adventure is signing off for now. We're moving through the 'C's now. Stay tuned for the Central African Republic.
Posted by Camilla M. Mann at 6:48 AM