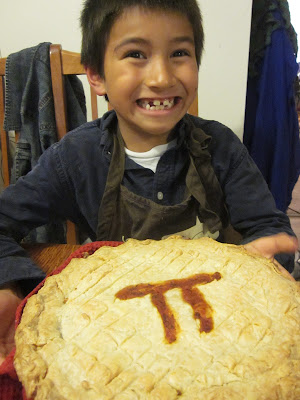 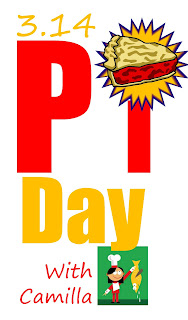 For our savory pie of the evening, I found inspiration with this pizza pie recipe that appeared on npr's website last week in the article, "Celebrating the Pies of March."

With a plea for non-whole wheat crust and the looming deadline of finishing homework and a school night bedtime, I bit the bullet and bought a pre-made crust. I know, I know...I'm slipping. It happens.

Rub a 9-inch pie pan with a layer of olive oil and place rolled-out dough in pan, pricking the bottom with a fork. 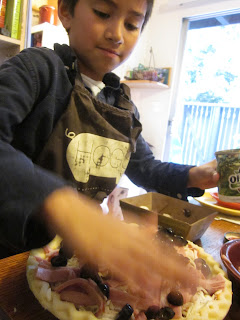 Layer the crust with all of your favorite pizza toppings. In Dylan's case, he used shredded mozzarella, organic marinara sauce, sliced ham, sliced olives, and sliced mushrooms. Layer upon layer until the crust is full.

Place the second rolled-out crust onto the top of the pie, crimp the edges of the two crusts together, and cut some small vent holes in the top.

In honor of the day's theme, I cut a pi symbol into the top and gently spooned some more marinara sauce into the symbol.

Bake for 15 minutes at 400 degrees. Lower oven temperature to 375 and bake for another 30 minutes.

Let rest for about 5 minutes before serving.

I didn't take any pictures of the sliced pie because we didn't wait long enough and it sort of oozed out over the plate. So, it wasn't pretty, but it was tasty.