Carpaccio, Pretty as a Painting

By Camilla M. Mann June 09, 2011
To celebrate the end of the school year, Jake and I took our new 2nd grader and 4th grader to Cantinetta Luca in Carmel. And despite the fact that they seriously need some Italian lessons (bread is pane - with one 'n' - not panne; grapes are uve, the word they use is not any word I've ever seen, ever; bruschetta is pronounced brews-ketta, not brew-shetta) I thoroughly enjoy the food. Plus, how can you beat pizza or pasta and gelato for five dollars for the boys? 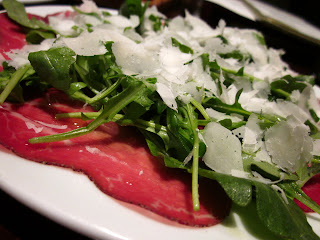 The carpaccio appetizer is as gorgeous as it is delicious. Bresaola, air-dried beef, is served with arugula, shaved pecorino, and drizzled with olive oil and fresh lemon juice.

From the two accounts I can find for the name of this dish, both reference a painting. Venetians claim that carpaccio was invented at Harry's Bar when, in the 1950s, a countess was told that she should only eat raw meat. The owner, Cipriani, named the dish - raw, sliced beef with a mustard sauce - after painter Vittorio Carpaccio whose paintings often used those colors.

The other Italian city to lay claim to the invention of carpaccio is Milan. A similar tale, involves a weathly woman who was prescribed a diet of raw meat. But since it was not socially acceptable for a woman of her stature to order raw meat, the owner suggested she use a code word. When she asked, "what word should we use?" she was sitting beneath a Carpaccio painting. That was it.

However it was actually named, this dish was pretty as a painting.