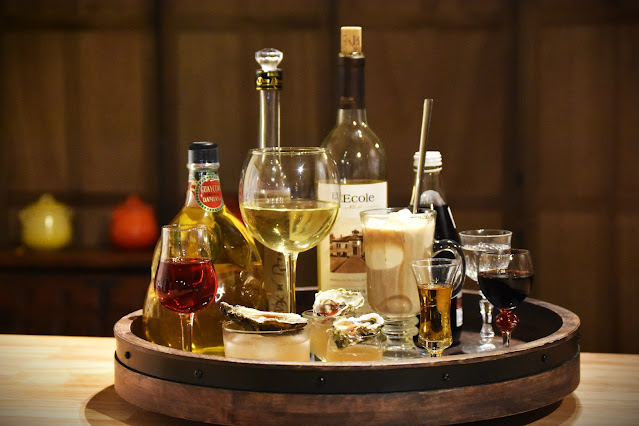 The month is the second month of the new #MoviesandMunchies group. For February, Sue of Palatable Pastime asked us to watch The French Dispatch; you can read her invitation here.
I will start with this: I think you either love Wes Anderson movies, or you hate them. Back in August 2021, we were assigned Moonrise Kingdom for #FoodNFlix and I went far Down the Wes Anderson Rabbit Hole. Actually, re-reading that post, maybe the reality is you either appreciate his movie-making style, or you don't.
A good friend of mine said she hated this movie. I actually quite enjoyed it. This is just one of the many reasons I love participating in our online movie and book groups; I am pushed to watch and read things that I may not have done otherwise. Besides, it's interesting to discuss with people who many not share your opinions.
On the Screen 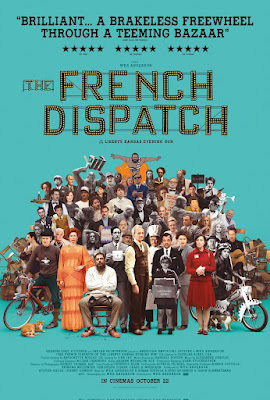 image from imdb.com
Like all his other movies, this one is odd, over-populated with characters, and visually distinctive. And, also, like his other movies: there is a central theme, but not always a plot. For The French Dispatch, Anderson is focusing on journalists and journalism. This is loosely referring to the New Yorker when founder and editor Harold Ross had a host of talented writers in his corps. The fictionalized New Yorker is The French Dispatch with Bill Murray playing the Ross-character named Arthur Howitzer, Jr.
Published out of a town called Ennui (yes, as in listlessness and lack of enthusiasm), The French Dispatch showcases writers and the work they are doing for an upcoming issue. The first story centers on Moses Rosenthaler (played by Benicio Del Toro), an artist serving a life sentence for homicide who having an affair with Simone (played by Léa Seydoux), who is both his muse and his prison guard.
The second story features Lucinda Krementz (played by Frances McDormand) as a writer covering the 1968 student protests in Paris. She gets involved with Zeffirelli (played by Timothée Chalamet) and compromises her journalistic integrity and objectivity.
The final story has writer  (played by Jeffrey Wright) as he profiles a legendary chef named Nescaffier who works his magic in the kitchen of the police department.
Yes, it's all as weird as it sounds. But, for me, the film's eccentricity was its appeal. In fact, after watching several of his movies, this one might just be my favorite.
On the Tray 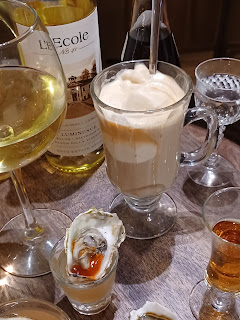 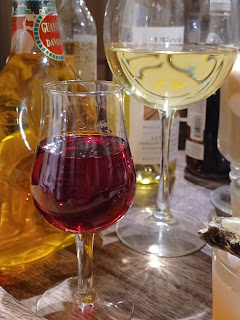 I was inspired by the tray of cocktails that a waiter assembles and carries up the room of journalists at the very beginning of the movie. Jake and I watched that repeatedly as I took notes: oyster shooter, affogato, white wine, cola, Campari, and more. 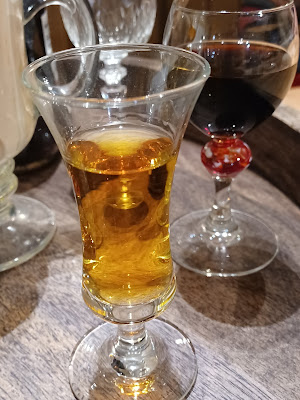 You can see the tray in its entirety at the top of this post. I opted to create my own tray with a variety of glasses and libations after I ran to my parents' house and borrowed several fancy glasses from my mom. My glassware is much more functional than beautiful. I think the oyster shooters were the most fun to make and to enjoy. I am calling it...
A Shot to Combat Ennui
A French Dipatch-Inspired Oyster Shooter 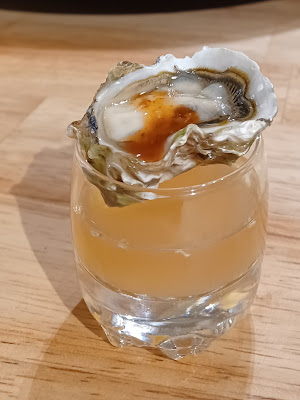 This is like French-kissing the ocean on a tropical beach. I promise: your tastebuds will not get bored with this oyster shooter.
Ingredients, serves 2
Procedure
In a cocktail shaker, combine the first five ingredients, add a scoop of ice, and shake well. Strain out the ice and divide drinks between glasses.
I made poured two smaller servings to fit the Kumamoto oysters from Bodega Bay and two slightly larger servings to fit the larger oysters from Washington state...I forgot to write down their name.
Balance an oyster over each glass. Sprinkle with sea salt. Add a dash of hot sauce to each. Serve immediately.
On the Plate 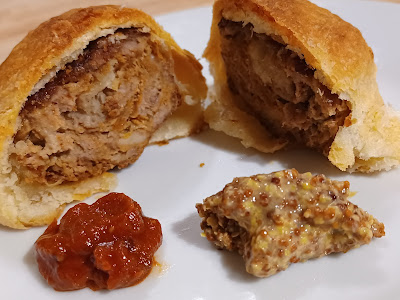 My second inspired recipe was from the Roebuck Wright vignette. It's no surprise that I was most enamored with the food writer, right? He narrates, "Monsieur Nescaffier made his name and reputation. He is fanatically celebrated among cooks, cops, and capitaines, not to mention squealers, stoolies, and snitches, as the great exemplar of the mode of cuisine known as Gastronomie Gendarmique. 'Police cooking' began with the stake-out picnic and paddy-wagon snack, but has evolved and codified into something refined, intensely nourishing, and, if executed properly, marvelously flavorful."
Minced Lamb Bonbons in Pastry
My Attempt at Gastronomie Gendarmique 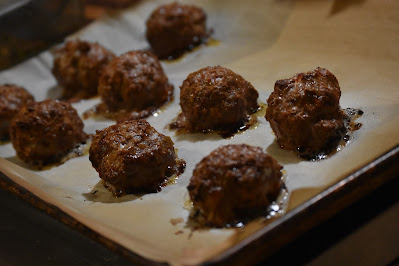 Ingredients serves 4 to 6
Procedure
Preheat oven to 350 degrees Fahrenheit. Line baking sheet with parchment paper and set aside.
In a small bowl, place the breadcrumbs and moisten with the buttermilk. Let stand for at least 5 minutes. In a medium mixing bowl, blend together the meat, egg, minced garlic, and seasoning. I use my hands to make sure the spices are well-distributed. Fold in the buttermilk-breadcrumb mixture, then form into meatballs and place them on the prepared baking sheet.
Bake for 25 minutes and remove tray from the oven. Raise the oven temperature to 400 degrees Fahrenheit.
Wrap each meatball in a puff pastry square and place back on the baking sheet. Place in the oven and bake for 20 to 25 minutes until the puff pastry is golden brown and crisped to the touch. 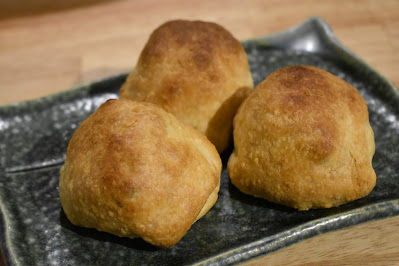 Serve immediately with whatever sauces you prefer. We served it with an unsweetened ketchup and a whole grain mustard. D referred to these are meatball wellingtons. Okay. I can see that.
Well, that's a wrap for my French Dispatch-inspired creations. You still have more than half the month if you want to watch and participate. And, if Wes Anderson isn't your cup of tea, next month Wendy of A Day in the Life on the Farm is hosting as we watch Off the Menu. That is a fun little food-centric rom com that I watched in the height of our shelter-in-place last year. I'll definitely be watching it again to get inspired into the kitchen.