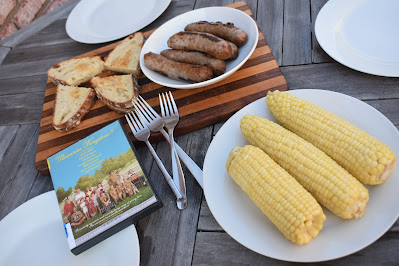 This month Elizabeth at Literature and Limes is hosting the Food'N'Flix group as we watch Moonrise Kingdom.* You can read her invitation here.
I had never heard of the movie, but was eager to jump in. I picked up the DVD at the library and we all nestled in to watch. Then we realized that it was directed by Wes Anderson and promptly went on a deep dive down the Wes Anderson rabbit hole. After Moonrise Kingdom, we pulled out Fantastic Mr. Fox, we streamed Isle of Dogs, and we also sat down to watch The Royal Tenenbaums, The Grand Budapest Hotel, and Rushmore which were all available at the library. 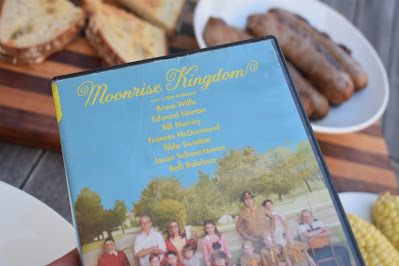 So, after our Wes Anderson exploration, I can say that his movies are eccentric, distinctive, and each frame could be printed and hung up in an artsy coffeehouse. The pacing and dialogue is understated and the soundtracks are ethereal.
This is a sweet coming-of-age story where Sam and Suzy run away from home on their tiny island off the coast of New England. They had been plotting this escapade as penpals. The duo is eventually tracked down by the authorities and Suzy's parents.
And though food isn't a huge component to the plot, I was pleasantly surprised by the list that I generated as I watched:  breakfast (bacon and toast) at Summer's End; camp breakfast (bacon, eggs, bread) at Camp Ivanhoe; coffee at the police station; chocolate cake in the Billingsley kitchen; chewing gum; fresh caught fish that Sam and Suzy catch; biscuits and sausages; and more.
In any case, I was inspired by the simple meal that Captain Sharp and Sam share in Sharp's kitchen after Sam's foster parents declare that they can't accept him back. The scouts had no idea that Sam was an orphan...and all alone. So, Sharp takes him home and serves him a simple meal of pan-fried sausages and toast. He also offers Sam "a slug of beer." Sam pours out the remainder of his milk into an ashtray and gratefully accepts the beer. "I’m sorry for your loss," Sharp tells the boy. "Anyway, that’s what you’re supposed to say."
I grilled some sausages from local-to-me Pig Wizard; I steamed corn on the cob; and I made simple grilled cheese sandwiches on homemade sourdough. Actually, the grilled cheese wasn't so simple. But it was, in my mind, the ideal combination of taste and texture. The sourdough loaf had a nice heft that allowed the gruyère to melt completely without charring the bread. The Pink Lady apple slices contrasted with the crisp sage leaves for a complex mouthfeel and burst of flavor.
Ingredients makes 1 sandwich 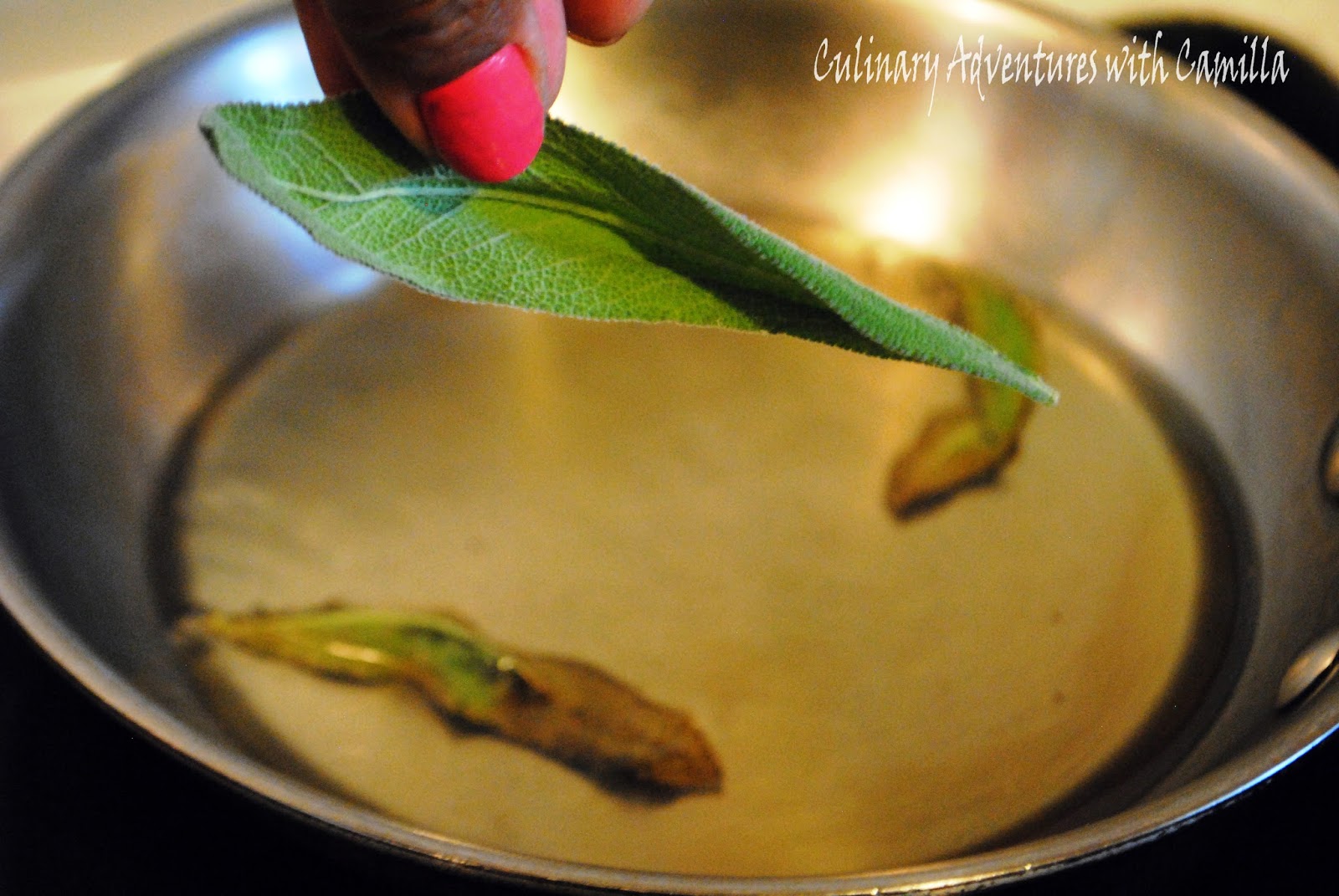 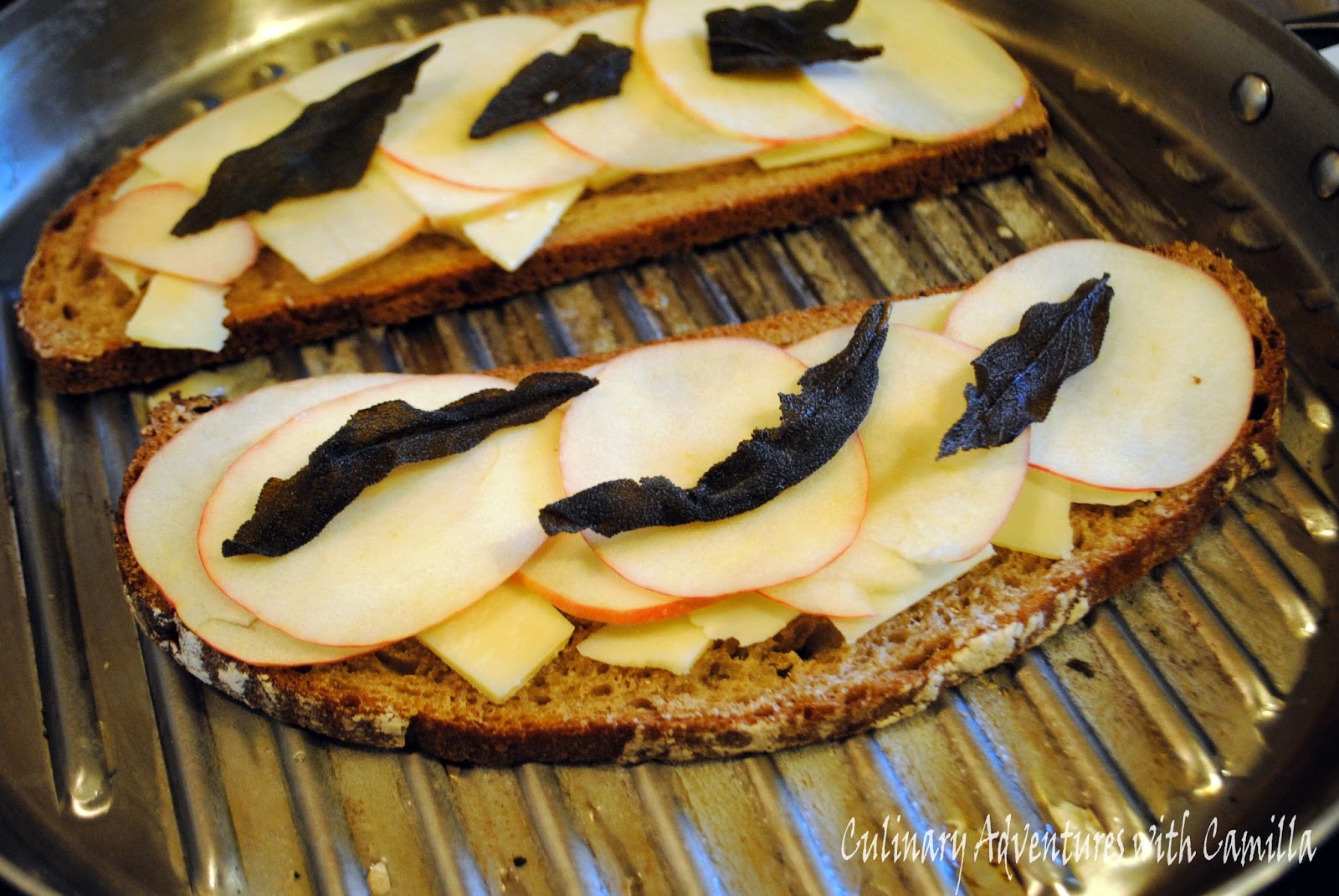 Crisped Sage Leaves
Melt butter in a small skillet with a splash of olive oil. Heat until the butter-oil mixture begins to bubble and get foamy. Lay your sage leaves in the pan in a single layer with space between them. Watch them carefully as they will go from crisped to burnt quickly. Once the edges begin to curl, flip the leaves over and crisp the other side. Remove crisped leaves to a paper towel-lined plate to drain. Set aside.

Grilled Cheese Sandwich
Melt butter in a skillet or grill pan on low heat. Butter your bread on one side and place it butter side down on the hot pan. Layer cheese, apples, cheese, and sage leaves on top of that bread. Sprinkle with salt and pepper to taste. Add more cheese, more apples, and a final layer of cheese on top of that. Then top it all with another slice of buttered bread – this time with the butter side up. 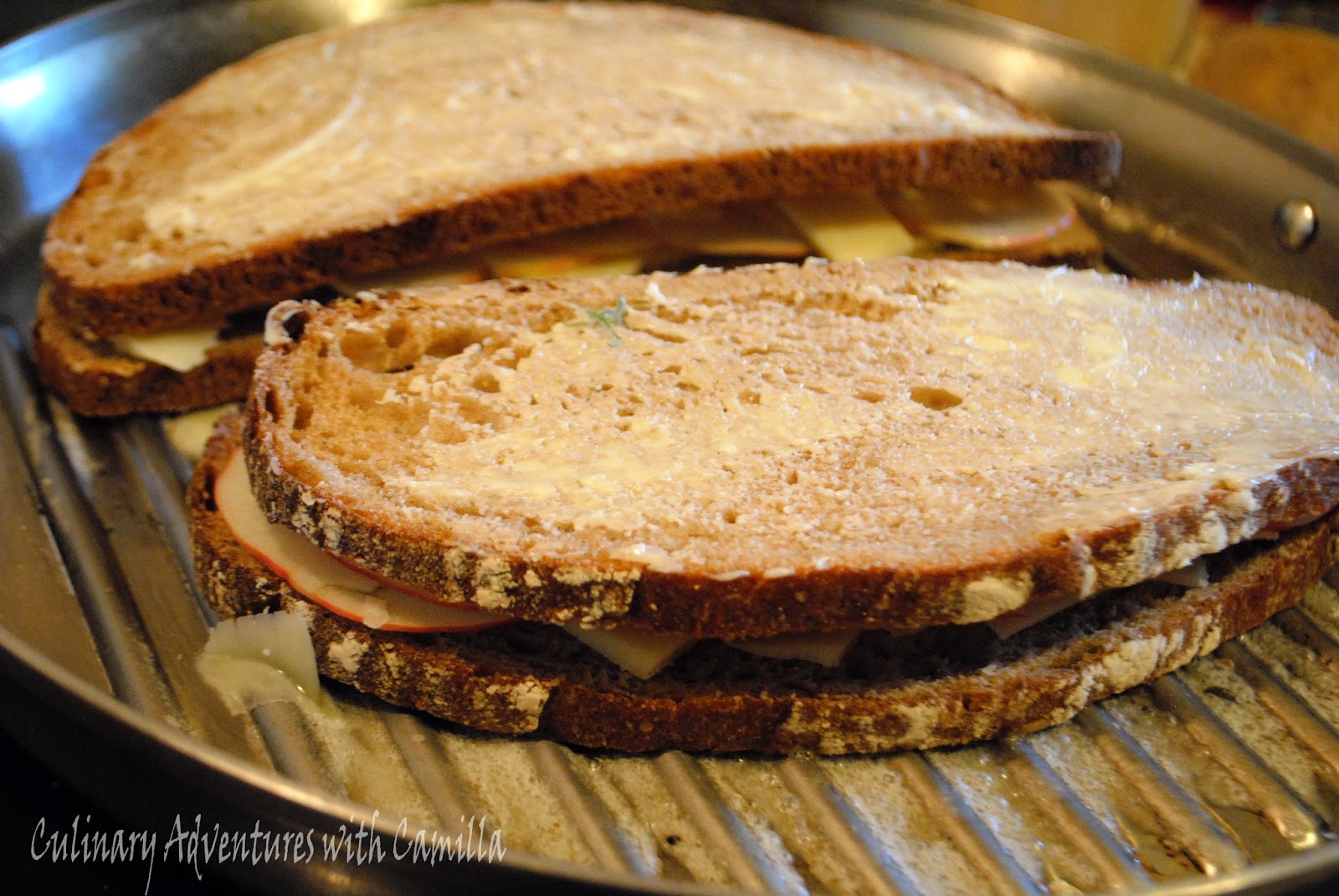 Once the cheese begins to melt on the bottom half of the sandwich, check the bread. It should be crisped and turning brown. Flip the sandwich over and grill till, again, the bottom cheese is melted and bread crispy.

Remove sandwich to a cutting board and slice in half. Serve immediately.
That's a wrap for my Moonrise Kingdom offering. The Food'N'Flix crew will be back next month as we watch Words on Bathroom Walls with Wendy of A Day in the Life on the Farm is hosting. Stay tuned.