This month,  David from Cooking Chat picked the topic of Celebrating BIPOC Winemakers & Winery Owners for our February Wine Pairing Weekend blogging group. I'll be honest: when Nicole of Somm's Table picked the same theme last February, I had no idea what that even meant. BIPOC. The acronym BIPOC refers to "black, indigenous, and people of color."
After last year's event - and all of the other wine finds from my wine writing colleagues - I was inspired to track down several of these bottles for myself. You can read David's invitation here for this year's event and if you are reading this soon enough, feel free to join our live Twitter chat on Saturday, February 12th at 8am Pacific. Follow the hashtag #WinePW and be sure to add that to anything you tweet so we can see it. In the meantime, all of these posts should be live by chat time. Here's what the bloggers are sharing...
Maison Noir 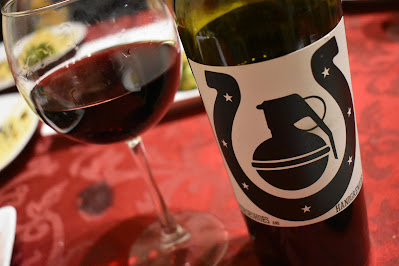 David wrote about Maison Noir last year when he shared his Black-Eyed Peas with Collard Greens. Founded by André Hueston Mack, Maison Noir is located in Oregon’s Willamette Valley. I was fascinated to see that he is not only a winemaker but a sommelier. In fact, Mack was awarded the prestigious title of 'Best Young Sommelier in America'. That honor launched him in to a position as a sommelier in Thomas Keller's famous restaurant in Yountville, California, The French Laundry. Then, Mack went on to work as the head sommelier at Keller's Per Se in New York City. A winemaker who also works intimately with food is a gem indeed!
Garage Vins de Oregogne 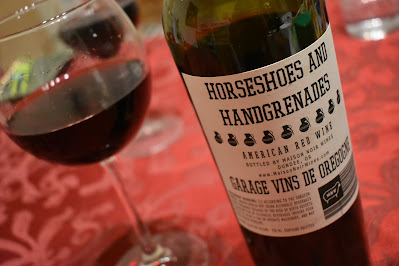 The Maison Noir wine I found was Horseshoes and Handgrenades. A non-vintage American Red wine, the label touts it as a Garage Vins de Oregogne which is a not-so-subtle nod to the garagistes, a group  of winemakers in the Bordeaux region who began making wine in the 1990s that strayed from the traditional wines of Bordeaux; they made what were called Garage Vins de Bourgogne.

Horseshoes and Handgrenades is sourced from Syrah out of southwestern Oregon and Cabernet Sauvignon and Merlot from Washington. It is a full-bodied red blend that drips with cherry aromas and flavors.

Steaks in a Cherry Pan Sauce 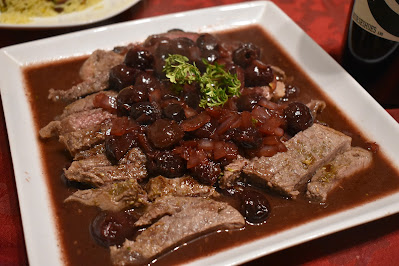 I decided to go all-in on the cherry pairing and opted to serve steaks in a cherry pan sauce. This is simple to make, but looks fancy and was a delicious match for the wine.
Ingredients serves 4 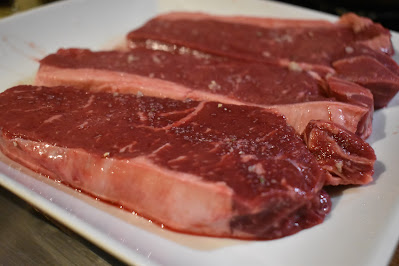 Take the steaks out of the fridge and let them stand on the counter for at least 30 minutes before cooking. Season the steaks generously on both sides.

Heat a large cast-iron skillet - I used an enamel over cast iron - over high heat. Add the oil to the pan and swirl to coat the surface. Once it's shimmering and hot, add the steaks to the pan.

Cook for 3 minutes on each side, allowing a deep brown crust to form on each side of the steak. A word of caution: once you put them in the pan, do not touch them. And, again, once you flip them over, do not touch them. You want to make sure a nice crust forms. If you take the internal temperature, the steaks should be around 130 degrees Fahrenheit which is medium rare. They will continue to cook slightly from the residual heat. If medium rare isn't what you want, cook them longer or shorter according to your taste.

Remove the steaks from the pan and set on a cutting board or platter. Tent with foil and allow to rest while you make the cherry sauce.

Cherry Pan Sauce
Use the same pan for the sauce as you did for cooking the steaks...don't wash it. All of that butter and fat in the pan equals yummy goodness! You can discard the thyme sprigs, but keep the garlic cloves in the pan.

Add the butter and new garlic. Cook over medium heat for about 3 minutes or until the garlic begins to soften. Add in the chopped thyme and the cherries. Cook for about 5 minutes, stirring frequently.

Once the cherries begin to soften and release their juices, pour in the wine, balsamic vinegar, maple syrup, and mustard. Whisk to combine and make sure that you scrape up any browned bits from the steaks off the bottom of the pan. It's called the fond and it's where a lot of flavor comes from!

Bring the mixture to a simmer and cook over medium-low heat for approximately 10 minutes. The wine will reduce and the cherries will burst. Season, to taste, with salt and pepper. 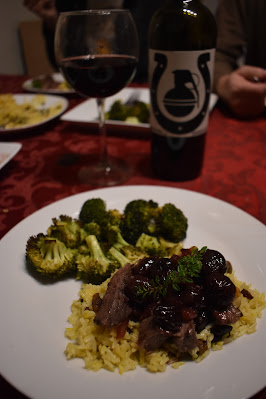 To Serve
Slice the steaks and either serve them directly in the pan with the cherry sauce or with the sauce spooned over top. Garnish with more fresh thyme and serve immediately.
That's a wrap for the #WinePW BIPOC event of 2022. We'll be back in March as Wendy from A Day in the Life on the Farm leads us in writing about a new-to-us varietal. Stay tuned!