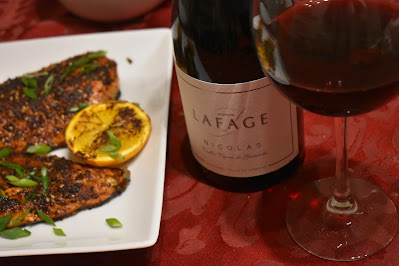 Wendy of A Day in the Life on the Farm is hosting the French Winophiles this month with a focus on romance. She writes: "February is the month we celebrate Love. It is also the coldest month of the year so maybe that has more to do with the snuggling than Cupid. LOL." She continues, "What wine means romance to you? Do bubbles tickle your fancy? Or perhaps a strong Bordeaux with a steak shows your love. Maybe something from the Sea with a crisp, bright white."
If you are reading this soon enough, feel free to join in our Twitter chat on Saturday, February 19th at 8am Pacific time. Just follow the hashtag #Winophiles and be sure to add it to anything you tweet so we can see it. In the meantime, here are the articles planned by the French Winophiles...
Keeping It Spicy 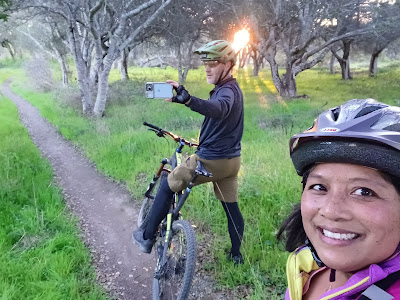 Years ago I saw Kevin Bacon in concert - with his brother - as part of The Bacon Brothers. Did you know he's a musician as well as an actor? In any case, I always chuckle with I think of the marital advice he gave during a break in their sets. He said: "Keep the sex dirty and the fights clean." Yes, yes, yes! No name-calling, ever. And, well the dirty sex speaks for itself.
Now I many not have always phrased it that way, but whenever my friends and family were getting married, I loved giving them a wooden pepper grinder with lots of different kinds of peppercorns and a reminder on the card to "always keep it spicy!" That advice is what brings me to my pairing this month.

Jake and his mountain biking pals often grab blackened chicken street tacos from a local spot after an arduous ride. I haven't tried them myself, but I have been experimenting with blackening foods. Honestly, when I first started seeing blackened foods on restaurant menus in the 1980s and 1990s, I thought that it was a technique that didn't require any skill. But, upon further exploration, I have discovered that blackening is very different than burning. Maybe everyone knew that except for me!
More on blackening shortly. Let's start with the wine I poured.
Domaine Lafage Cuvee Nicolas 2018 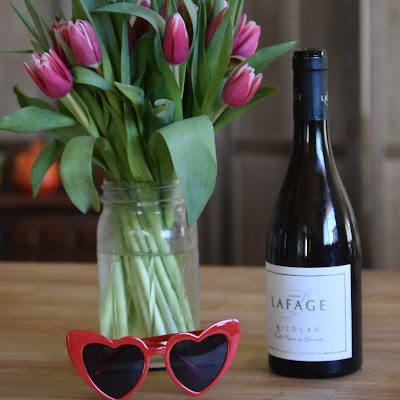 This family-run winery lies just south of French Catalonia capital of Perpignan and sources its grapes from nearly 200 hectares of vineyards that run from closer to the Mediterranean all the way to the foothills of the Pyrenees. That range allows Jean-Marc to make everything from bright, crisp white wines to deep, hefty reds. And the entire estate is farmed organically with many of the vines half a century old. And they harvest all their grapes by hand. The white wines are usually aged in stainless steel with the red wines split between concrete tanks and large French oak.

The 2018 Domaine Lafage Cuvee Nicolas is a single varietal made from 100% Grenache grapes. It poured an inky crimson and aromas of cherries wafted from the glass. A floral overtone added a little depth to this medium-bodied wine that was both velvety and spicy. 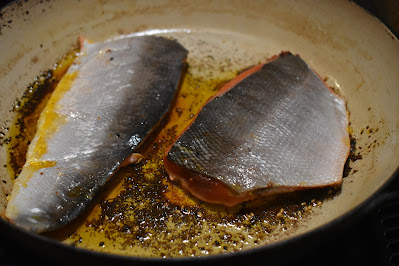 Let's talk about the technique of blackening that is often associated with traditional Cajun cuisine, but brought into the mainstream by New Orleans chef Paul Prudhomme in the 1980s. In fact, the state of Louisiana had to impose a ban on commercial fishing for redfish as the popularity of blackened redfish on menus threatened the species' sustainability. 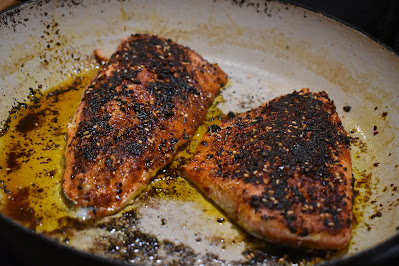 In a small mixing bowl, stir together the two kinds of paprika, cayenne, thyme, oregano, salt, pepper, and citrus zests. Set aside.
Place your salmon fillets, skin-side down, on a workspace and melt 2 Tablespoons of butter. Brush the fish with the melted butter and sprinkle the surface of the fish with two-thirds of the blended spices.
In a large cast iron skillet, melt 2 more Tablespoons of butter with a splash of oil. Heat until the butter is melted and brown. Place the salmon, flesh-side down and cook for 2 to 3 minutes. Do not touch move the fish during that time so that a crust forms. Sprinkle the remaining third of the blended spices on the skin side.
Use a spatula to flip the fish over and cook on the other side until the skin is crispy, approximately 5 to 6 minutes. Remove the salmon to a platter. Use the same pan to quickly char the thick slices of orange.
Garnish the platter with the charred oranges and serve immediately. 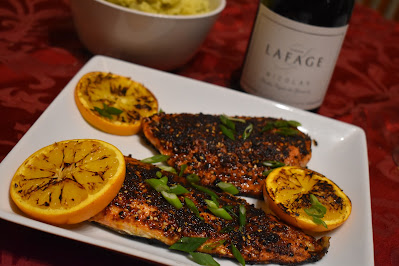 That's a wrap on the February French Winophiles event. We'll be back next month with a discussion of French women in wine. Stay tuned.