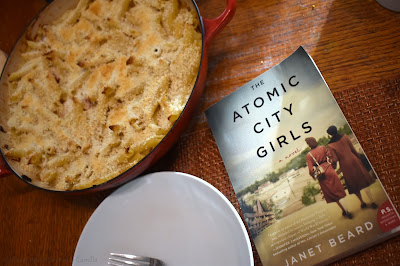 This has been on my bookshelf for years. And since we've been sheltered in place, I have had a tough time finding a book that grabbed me or, at least, held my interest long enough for me to finish it! This book - The Atomic City Girls by Janet Beard* - was the first book I've finished in weeks! That's a rarity for me. I can usually breeze through a book or two every week. But these are not normal times, I suppose. 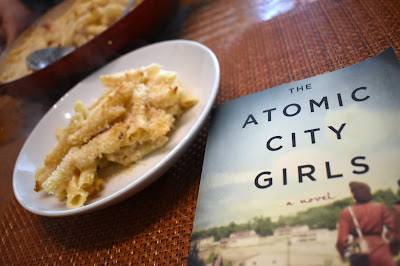 Historical fiction is usually my genre of choice though WWII hasn't been my era of choice. Though I have certainly read more in that epoch in recent months such as The Winemaker's Wife and At the Wolf's Table; and I do have Hannah's War on my nightstand as well.

This is a novel - set in Oak Ridge, Tennessee - about the "girls" who are unwittingly helping in the calibration and production of the atomic bomb. They are technically women, but just barely eighteen years old; and they are unwittingly helping because they have no idea what they helping to build. They have been told it will help end the war. And that is all they know.

I find that fascinating and didn't personally know anything about Oak Ridge's roll in the Manhattan Project until now. But as this is a novel, it's more focused on some human storylines versus the historicity of the entire endeavor. I did find the black and white photos included both compelling and confusing. They give a visual context to the time and place; however none of the people in the photographs are the characters in the novel.


The main protagonist is an eighteen-year-old girl named June who's fiancé was killed in the war. She gets recruited to Oak Ridge and launches into an affair with a thirty-year-old alcoholic nuclear scientist named Sam Cantor. Talk about a toxic relationship!

The book attempted to do a lot, including themes about the moral implications of the work on an atomic bomb (mostly through Sam's eyes since the girls were mostly clueless about the work at Oak Ridge) and issues of race and gender. One of other girls Cici had only one goal in life: land herself a husband. Many of the characters felt one-dimensional and the book itself felt woefully underdeveloped and superficial.

Overall, I liked the idea of this novel a lot more than the novel itself. Still I will hunt down some other books that address this project. I'm wondering if anyone has read The Girls of Atomic City: The Untold Story of the Women Who Helped Win World War II by Denise Kiernan...I think I might prefer that book. I'll keep you posted as I just ordered it; I'll have it this weekend. 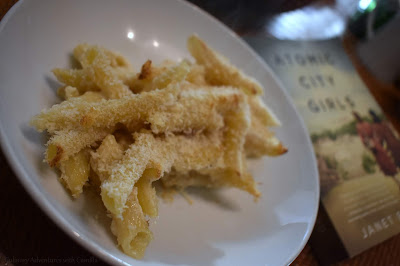 Despite this not being a foodie book, there is food mentioned throughout. The girls leave their duty stations, grab meals in the cafeteria, go home to sleep, and start the cycle all over again.

"The cafeterias had lines, too, especially when shifts changed, and everyone in town headed for supper at the same time. Cici complained about the food, but June was in awe of the different choices she could have every night of the week. She'd never eaten spaghetti before, and delighted in twirling the strands around her fork and slurping down the red sauce" (pp. 74-75).

On Christmas "(the) staff tried to jolly up the dining room for the holiday. Some tinsel hung over the door, and they were serving turkey and mashed potatoes. ...Cici sawed at a piece of turkey without looking up" (pg. 109).

But it was macaroni and cheese that seemed to get a repeated mention. "June was chatty all through dinner. She talked about her family back on their farm and all the mud and dust in town. ...She ate as she talked, wolfing down macaroni and cheese. Cici was surprised to see such a skinny girl each so much" (pg. 65). And, again, "Sam was waiting for her at lunch. She was ravenous, despite her exhaustion, or perhaps because of it, and he laughed, watching her devour her macaroni and cheese" (pg. 196).

So, I decided to make an Atomic City Girls-inspired macaroni and cheese. Only I didn't have any macaroni. In these week of being sheltered in place, I am actively trying to use what I have in my cupboard instead of running out to the store for one item. And I've previously shared my recipes for Lobster Mac'n'Cheese, so today it's just penne and cheese. This one is cheesy and crunchy with its layer of panko breadcrumbs blanketing the top. And the addition of bacon adds a welcome smokiness. 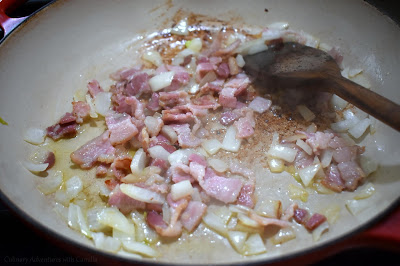 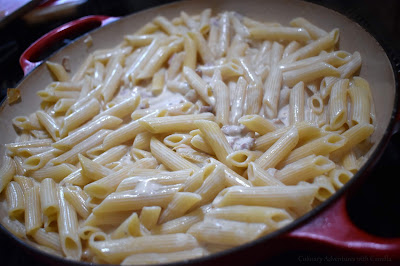 Cook the pasta according to the package instructions, but shave a minute off the cooking time as you will finish the pasta in the oven. Remove from heat and drain. Place the pasta in a mixing bowl and drizzle with olive oil. Stir to coat pasta to keep it from sticking. Set aside to cool while preparing cheese sauce.

Melt 1 T butter in 1 T olive oil in a deep saucepan, dutch oven, or stock pot. I used my lidded braiser. Stir in the onions and bacon. Cook until the onions are softened and the bacon has rendered most of its fat. Add in 4 T butter and heat until melted.

Whisk in flour over medium heat and continue whisking for about 1 minute until bubbly and golden.
Gradually whisk in the half-n-half and milk until smooth. Continue whisking until the sauce begins to thicken. Sprinkle in smoked paprika and half of the shredded cheese. Stir until melted and smooth. Then add in the remaining shredded cheese.

Stir in the cooled pasta and toss until the pasta is fully coated with the cheese sauce. Season to taste with salt and pepper, as needed. Mine didn't need anything!

In a small mixing bowl, combine panko breadcrumbs and parmesan cheese. Sprinkle over the top of the pasta and place in the preheated oven. Bake until bubbly and golden brown, approximately 30 minutes. Serve immediately.

Click to see what everyone else read in April 2020: here.