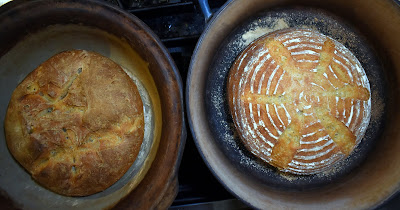 After Sourdough Round v. 1, I had some random thoughts...


It was the second to the last thought in the list that inspired the twin loaves that I baked this morning. And, yes, I am specifying in the post title that they are fraternal twins because, it was rightly noted that "they don't look anything like, Mom." Fine.

And it was the last thought that had me hoping online to order another banneton. With the shipping delays due to the coronavirus pandemic, I don't expect to receive it for a few weeks. Until then, fraternal twins it is.

Also, I decided to stick with Clive's Sourdough Loaf recipe for at least a few more tries so I don't change too many variables as I struggle to work out this sourdough baking thing! But I realize that I completely forgot to add the salt. Drat. Next time... 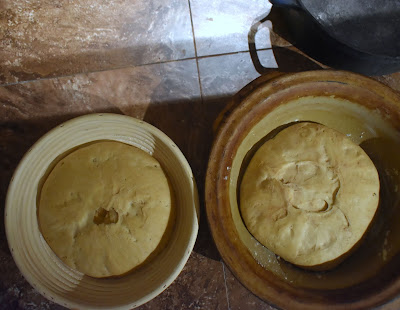 Ingredients makes 1 loaf (double this for the twins) 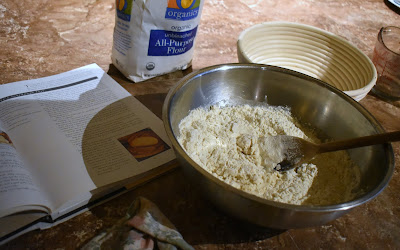 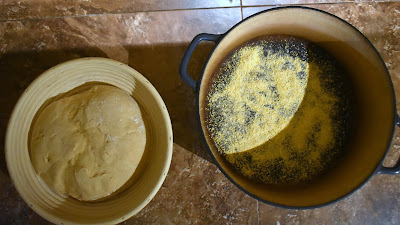 Combine starter with water, flour, and salt in a large mixing bowl. Mix until the dough is smooth and no longer sticky. Then turn it out onto a floured surface and knead thoroughly for 2 minutes [I tried to cut this time to reduce the chance of squishing out all those good air pockets]. Return to the bowl and let rise at room temperature until the dough is doubled in size. This can take anywhere from 2 to 8 hours. [I gave it 5 hours this time.]

Punch down the dough and form it into a ball. Place the dough ball in a floured banneton or bowl lined with linen. Cover with a kitchen towel Let rise again until it is double in size. This can take anywhere from 2 to 6 hours. [I gave it 6 hours this time.]

Towards the end of the rising time, preheat the oven to 425 degrees F. 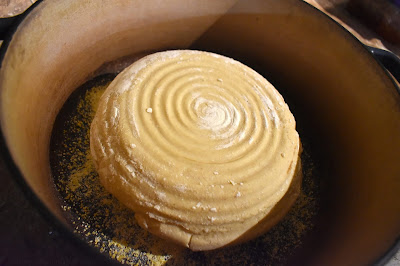 Uncover the loaf and invert it into a Dutch oven that has cornmeal spread over the bottom to prevent sticking. 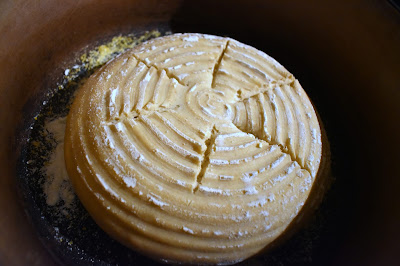 Slash the surface with a knife. This time I made a disjointed asterisk, emanating from the center. Cover on the Dutch oven and place it in the oven.

Bake for 20 minutes, covered, then remove the cover and return it to the oven for an additional 20 minutes. 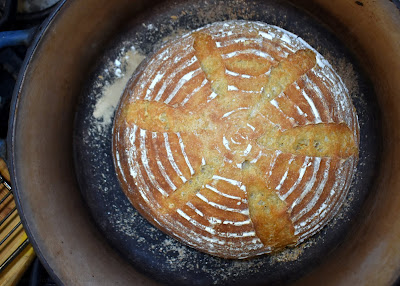 The bread should be golden brown and hollow sounding when tapped. Let cool on a wire rack. Try not to slice into it for at least an hour. 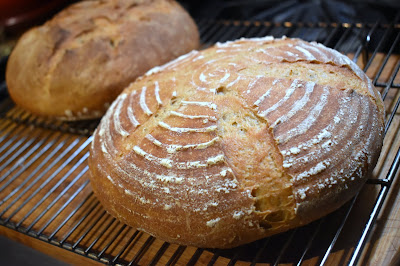 The verdict: the crumb was still pretty fine. But we were able to see a handful of air pockets this time. Even at just a 2-minute knead I feel as if I kneaded all the bubbles out. The taste was even more sour which I love. Jake noted that it still needed more salt; I didn't tell him that I completely forgot to add any...I just nodded. Yep, more salt. I think I will try Clive's recipe a few more times before I move on to another sourdough recipe and process. 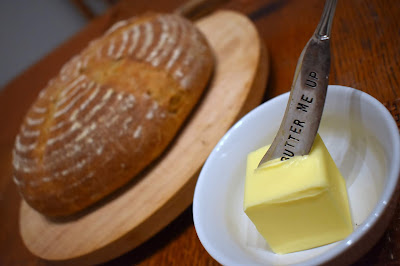 Well, that's a wrap for my second attempt at sourdough. I'm pretty happy with these twins, despite one being less photogenic than the other. Stay tuned for more adventures with Dough-ba Fett. 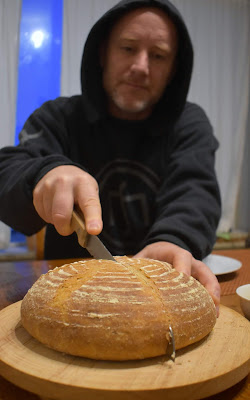 And my artist husband is working on a surprise for me. He's drawing a Dough-ba Baguette character for me. Ummm...the starter's name is Dough-ba Fett, not Dough-ba Baguette. "Close enough," he says. I guess I will add baguettes to my to-try list. 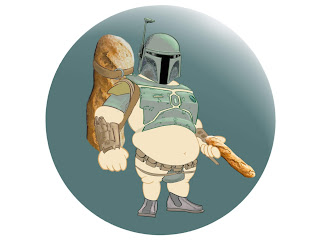