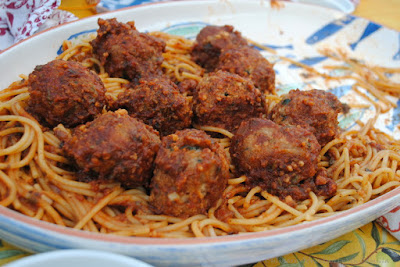 This month Wendy, from A Day in the Life on the Farm, is hosting this month's edition of Food'N'Flix. And she has asked us to post a recipe inspired by The Biggest Little Farm.* Read her invitation: here.

Before she assigned this, the movie wasn't on my radar at all. But, on one rainy afternoon this weekend, I watched it twice. The first time, I snuggled up with D, my Enthusiastic Kitchen Elf and resident gardener. If you follow my blog regularly, you'll probably know that he just finished building his sustainable garden fed by a fog collector and wrote a 50+ page paper about it that took me days to edit! Read my post: From Personal Project Garden to Victory Garden.

Jake could hear the movie while he was working remotely in the living room and came in to ask about it when he was finished. He was intrigued, so I sat down with him to watch it again. 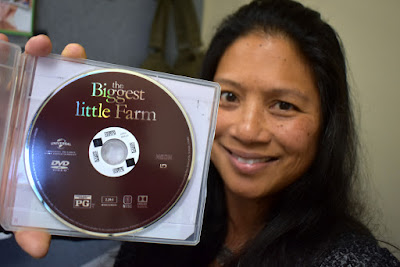 The Biggest Little Farm is a documentary film about John and Molly Chester who leave Los Angeles to create Apricot Lane Farms in the image of their dreams...because they made a promise to their dog Todd. Really. It's a beautiful film; you can tell that pre-farming life John was a documentary filmmaker. And pre-farming, Molly was a personal chef and food blogger who dreamed of owning a farm because she understood that the nutrition of food relies on how it's farmed.

So, after they get evicted from their urban apartment complex (yes, it had to do with Todd's incessant barking), they line up investors, find a farm, and uproot to Moorpark, about an hour north of Los Angeles. They are determined to farm traditionally, that is to say to create an independent ecosystem and habitat that eschews big monoculture farms. They hire a mentor who guides them in creating a farm with over seventy-five varieties of stone fruit, other crops, chickens, ducks, lambs, cows, and a pig named Emma.

But life at Apricot Lane Farms is not completely bucolic. The Chesters have to overcome snail infestations, coyotes slaughtering their ducks and chickens, starlings ruining almost seventy perfect of their stone fruit crops, a pig with mastitis, and so much more. But as the years progress, so does their farm. They successfully build the life of their dreams...and an amazing, working farm where solutions organically present themselves. An example was a shot of an aphid infestation. Right next to the aphids were ladybug eggs, aphids' natural predators. Remember in the movie Jurassic Park when Jeff Goldblum's character says, "Life will find a way." I think this movie is summed up with "Nature will find a way." And it will find a way a lot quicker without our "heroic" meddling.

In the title of this post, I include "Deep Conversations" because, as I mentioned, I sat down with Jake to watch this for the second time. The movie sparked an earnest conversation about what we envision in our retirement years. I know I've talked about running cooking classes, but we started tossing around the idea of owning a farm. Seriously. Maybe it's because I'm getting older. Maybe I'm less tied to staying on California's central coast once the boys are out of the house. But I was actually discussing areas in which I wouldn't mind settling later in life. Jake has always been less of a city person than I am, but before this weekend, I have never thought I'd like to be more than a bike ride away from the beach. We'll see where this goes.

Jake joked, "So, how many more times do you need to watch this movie before you're convinced?!" Funny man. I have to return that DVD today. But I do like when a book or a movie spawns some plans for our future. And I'm happy to keep the conversation going. Don't get me wrong, I know that owning a farm isn't easy - I mean the entire movie underscored that point - but I might not mind the work with a solid team. We'll see. 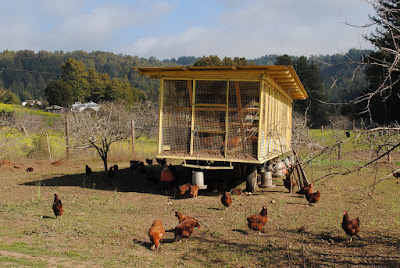 Since this is a post for #FoodNFlix, I watched the movie and looked for culinary inspiration. They don't show a whole lot of meals besides one with their farm crew that featured big, beautiful salad platters. Jake suggested a stone fruit pie, but those aren't in season.

The first thing I want to write about are farm fresh eggs. Eggs were the first success that John and Molly had, reporting that people lined up at the market and fought over the fifty dozen eggs they had for sale. So, they bought more chickens. 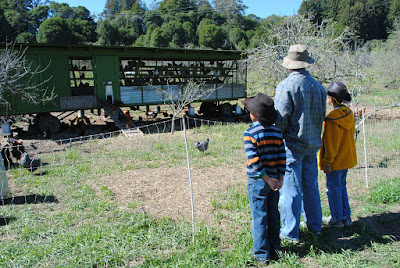 Years ago, I wrote a newsletter for a local farm's CSA (community-supported agriculture) subscription. My family and I had the chance to visit the farm. That was the first time my boys had ever seen an egg-laying operation. 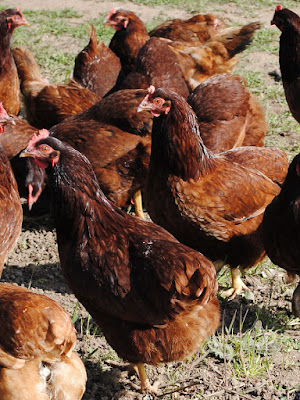 The farm also had meat chickens. 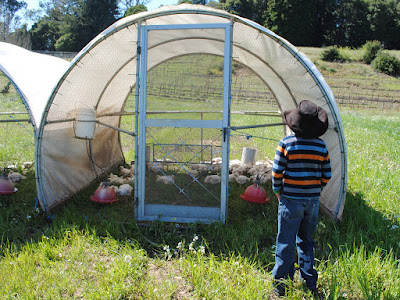 And we helped them plant some seedlings that we would later enjoy in our CSA box. 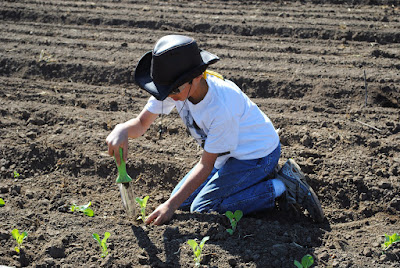 Farm fresh eggs are such a treat. 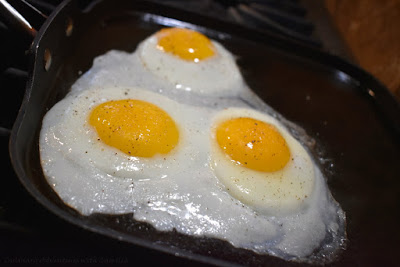 Trompe-l'oeuf is not a real phrase. But it pops into my head whenever I crack a farm fresh egg. Trompe l'oeil (trick of the eye) is a technique in art that involves realistic imagery to create an optical illusion that the painted objects exist in three dimensions. Think Pozzo's painting in Chiesa di Sant'Ignazio in Rome. L'oeuf means 'egg'. Trompe-l'oeuf = egg trickery. That's what I was pondering while cooking breakfast this morning.

I asked myself: can I really discern the taste difference of an über-fresh egg from pastured-raised, antibiotic-free, and pesticide-free layers? I think I can.

Are the whites more clear, more taut? I think so.

Are the yolks more vibrant from the insects and worms that the chickens have in their diets? Yes.

Is my EGG-citement about these beauties justified? I think it is.

Or is it a trick of the eye...that affects my tastebuds?!?

I suspect that mindset of the the eater definitely affects how a food or drink tastes. Think about how a crisp white wine tastes better if you're sipping it with your toes in the sand on a beach in the Mediterranean.

There is a gelateria in Rome whose owner once boasted that he had met the cows that gave him milk and the chickens that gave him eggs. Best gelato. Ever. Is that in my head? Maybe. But it was really, really good gelato.

As for the eggs I feed my family, I have to say that I will gladly pay more when I know that  the chickens have a better quality of life and that my money is going directly to the farmer. If I could get my hands on eggs from Apricot Lane Farms, I would! 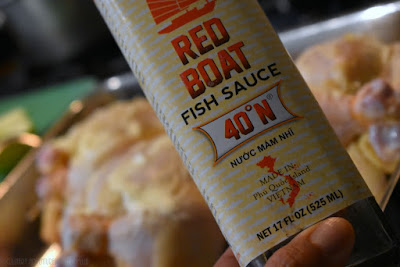 Since fresh stone fruits were out of the question, instead, I looked at their website for some inspiration. I stumbled across Molly's version of spaghetti and meatballs. It was the perfect dinner to end the rainy weekend. She writes: "Don't be scared off by fermented fish sauce, which is a traditional seasoning used in Southeast Asian cuisine and available in most grocery stores.  Worcestershire can be substituted, if preferred." 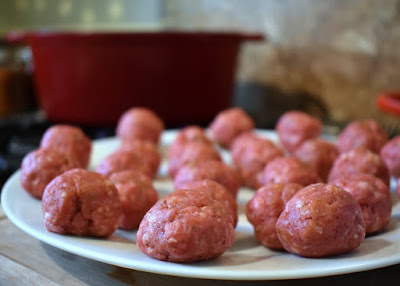 Form the mixture into balls. I got 18 to 20 meatballs, about the size of a golf ball. Place meatballs on a clean plate.

Melt butter in a splash of olive oil, in a large pot (I used a Dutch oven) then brown the meatballs in batches. Cook for two minutes per side, rotating with tongs. Remove the meatballs to a plate.

In the same pot, using the meat dripping as your fat, stir in the remaining onions. Cook until they are softened and translucent, approximately 5 to 6 minutes. Add remaining garlic and cook for an additional minute or two.

Pour in the wine and bring to a boil. Scrape the bottom of the pan with a wooden spoon to incorporate everything into the sauce. Add in the marinara, 1 T parsley, 1-1/2 t oregano, and fish sauce. Stir to combine.

Nestle browned meatballs into the sauce. Bring to a boil. Cover and reduce heat to a simmer. Simmer for 30 minutes, stirring occasionally to prevent the meatballs from sticking to the pan.

Thanks to Wendy for suggesting this fantastic film. I'll keep you posted on how many more times I watch it while Jake campaigns for a retirement farm. If you're interested in joining the #FoodNFlix crew, watch the movie and head into the kitchen. Wendy will be taking posts until April 28th.