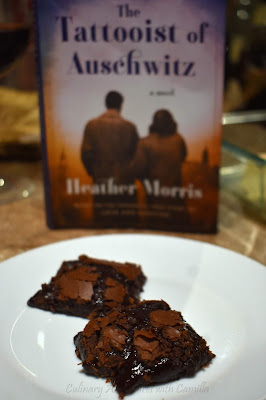 This is Wendy from A Day in the Life on the Farm's pick for our Lit Happens Book Club. I wasn't sure what to expect from The Tattooist of Auschwitz by Heather Morris*, but Wendy and I have been blogging friends for years. And lucky enough to have met in real life as well! I knew that our reading preferences often collide, so, I was excited to dig in.

Let's just say that I was more than captivated. I didn't get out of my pajamas for an entire day, ignored my family - except to cook and eat - and read it all in one day. Then I headed into the kitchen to make a recipe. But I'll get to that shortly. 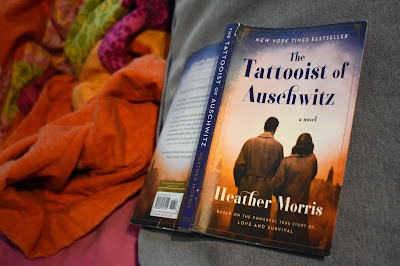 As a reader, I was immediately drawn into the story and the character of Lale. He is a young Jew from Slovakia who finds himself employed at the Auschwitz concentration camp as the tattooist. He is the man responsible for marking the prisoners' arms with their numbers.

Brief side story: when Jake and I were planning our wedding, we were in the basement of our local department store, scanning household items into a gift registry. We had already been living together for over a year, so we didn't really need anything, but our families wanted some guidance on things we wanted to create our new married life.

I was looking at blenders when an older woman approached me. "Excuse me. Please don't support that company," she said, gesturing at one blender. "Buy an Oster instead." She proceeded to pull up the sleeve of her jacket and showed me a tattoo of spidery numbers. "I was in Auschwitz. And Oster had a plan to overthrow Hitler. Thank you!" She, then, squeezed my arm and walked away. I still don't know if the Oster to which she referred actually had anything to do with the kitchen brand - or if it is just a common surname - but I did put the Oster blender on my registry and have been a loyal user since.


Okay, back to the book. Morris' book is an unsettling but gripping novel. As the tattooist, Lale enjoys more freedom than the other prisoners. And he uses that privilege to help others, trading jewels for extra food and distributing it among others. He is protective and subversive in subtle ways. While at the camp, he falls in love with Gita, another prisoner who is also Slovakian.

There are some horrifying, graphic scenes in the book. It's emotional and haunting. But it's also a tale of hope, courage, and love. While I did see that tagline - based on a true story - on the cover, it didn't sink in until I read the afterword by Gary Sokolov, Lale and Gita's son. He questioned, "Do I talk about food, which was a primary focus for both my parents but especially my mother, who took pride in a fridge filled with chicken schnitzels, cold cuts, and myriad cakes and fruit?" (pg.255). And it finally sunk in: oh, my goodness, this story happened to real people. As I said - haunting. I will read it again, but I passed it along to one of my best friends so she could read it to discuss with our online Lit Happens group.

Now on to what I was inspired to make... 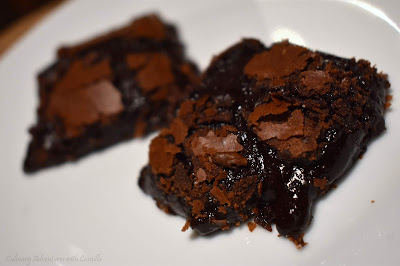 As Lale trades food for favors and access, two items come up consistently: sausages and chocolate.

"Back in his room, Lale opens the packages. Sausage and chocolate. He holds the chocolate to  his nose and inhales. Once again, he breaks the food into small pieces to make it easy for the girls to hide and pass around. Oh, how he hopes they will be discreet" (pg.75).

And also..."After one last kiss, Lale scrambles around for his clothes. Dressed, he gives her another quick kiss before leaving. Outside the block, the kapo is back in her position against the wall.

So, chocolate as currency stuck in my mind. I headed into the kitchen to make a rich, fudgy brownie for a decadent, delicious dessert. This is almost fudge-like and some people might think it's not cooked all the way through. Cook it longer, if you prefer. 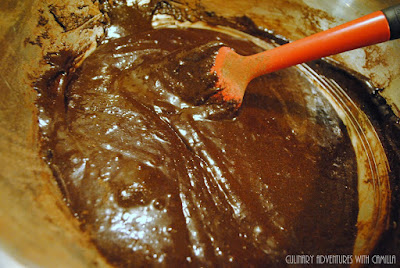 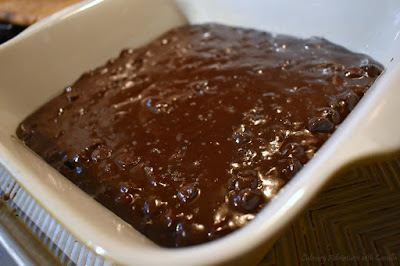 In a large mixing bowl, cream together butter, sugar, and brown sugar until lightened and fluffy. Beat in eggs one at a time, mixing well after each addition. Pour in the vanilla.

Here's what everyone else read in January 2019: here.