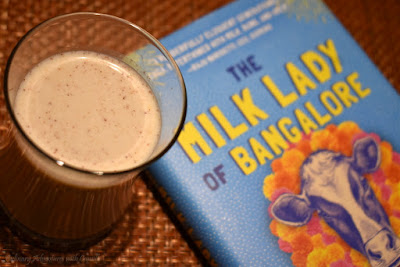 I finally got around to this book in my 'to read' stack: The Milk Lady of Bangalore: An Unexpected Adventure by Shoba Narayan.* Actually, this was my second time reading it. The first time I read it, earlier in the year, I didn't realize it was a true story. Going through it again - with that lens - I found it much more enjoyable. Though the first time through, I did like it as well.


In The Milk Lady of Bangalore, Narayan immerses us in the culture, customs, myths, religion, sights, sounds, smells, and flavors of her homeland. Narayan was born in India, immigrated to the United States as a child, and returns to Bangalore with her husband and two daughters so they can be closer to grandparents and experience their heritage first-hand. This is a charming read about the clashes and resolution of ancient and modern traditions. For instance, the book opens with Narayan moving into her new apartment in Bangalore. She gets a cow to walk through their house. "My uncles will be thrilled" (pg. 13) she tells her husband.


The narrative rambles a bit and I was shocked at how many years passed between the beginning of her story and when her daughter heads back to the United States to attached college. Some of the scenes seemed forced and contrived; I think that's why I didn't clue in to it being an actual memoir the first time I read it. But, both times, I enjoyed reading about the different kinds of cows, how the milk is graded, and how they view the milk from the cows.

"Milk from a black-colored cow is best because it balances all three doshas (imbalances) of the body. Milk from a red-colored cow balances vata, the air element that causes arthritis, gas, and bloating. Milk from a white cow is the worst: it causes kapha (mucus)."

But she is not the milk lady. This is about her friendship with Sarala, the woman who keeps cows in a field across the street from the apartment building. Sarala and Narayan grow close through the years and Narayan even buys her a cow.

"We have to be careful to buy a cow that is suited to our own dispositions, Madam," says Sarala. "Otherwise, these cows will simply take charge" (pg. 161).

I readily admit that my relationship with cows and beef has a checkered past. For the greater part of a decade - through my teens and early 20s - I didn't eat beef or any other kind of meat. I was a vegetarian. But after six or seven years, despite creating complete proteins by combining vegetable foods, I began to notice unwelcome changes. I know this might sound frivolous and vain, however, for an early-20s gal, thinning hair and brittle fingernails is problematic. Really problematic. So, I began to ease back into being an omnivore. I started with seafood first, then added in chicken, pork, and beef slowly. Now, I can't imagine not eating beef! It's versatile and tasty. 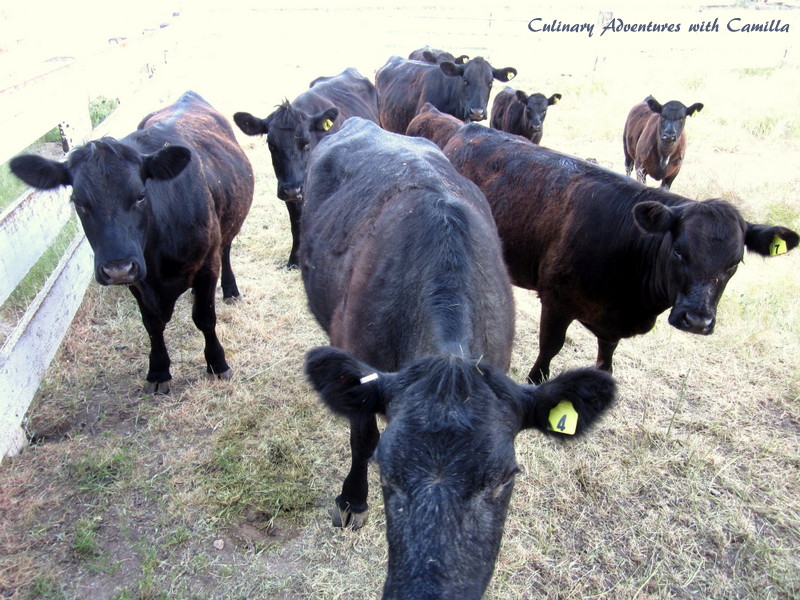 Also it's important to me that my kids understand from where their food comes. I want them to know that meat comes from an animal; it doesn't just appear wrapped in cellophane at the grocery store. 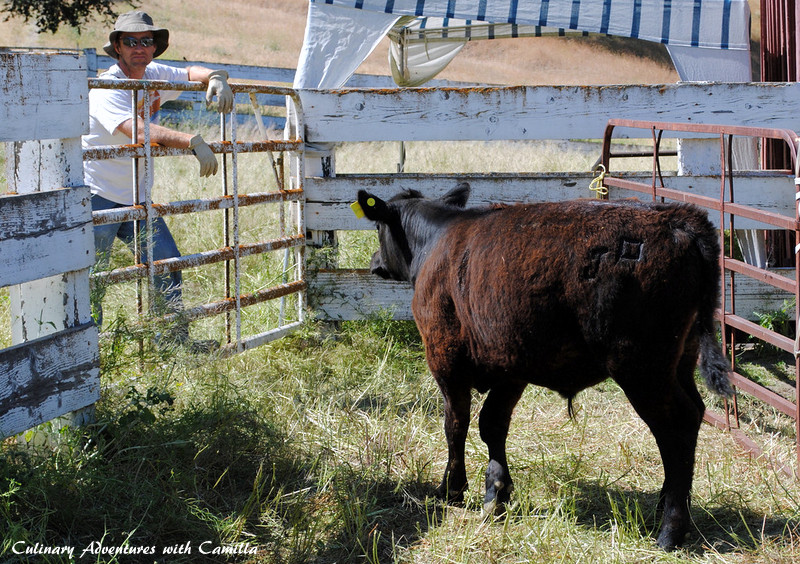 Luckily I have a couple of friends who have beef cattle. So, when we were invited to a friend's ranch in south Monterey County, to help with the tagging and branding of some calves, I said 'yes!' This was several years ago, but we still talk about Uncle Brian's cows. It was an experience that's burned into their brains. 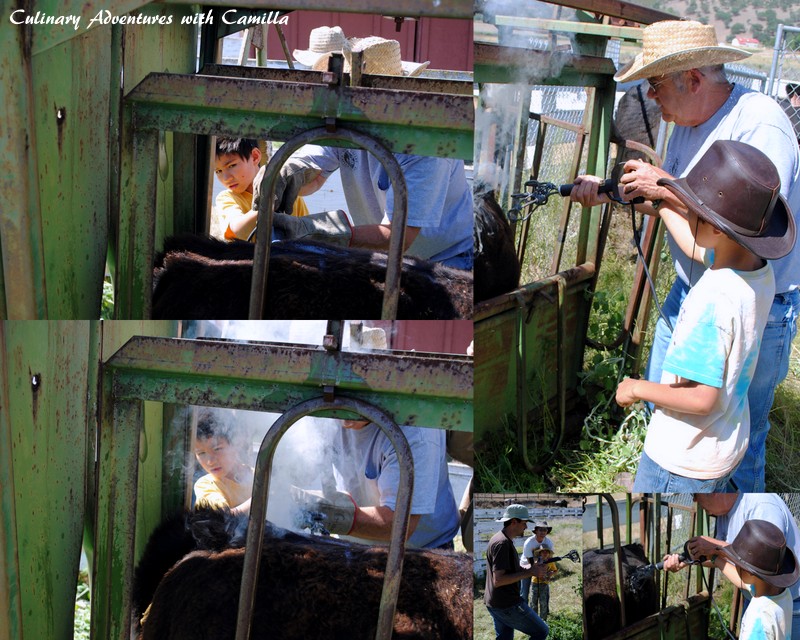 Sometimes, when we're eating beef, the Enthusiastic Kitchen Elf queries, "Have I met this beef?"

His brother corrects him, "You mean cow. Your question should be 'Have I met this cow?'"

"No, I know what I mean!" D insists. "A cow has legs...and ears...and a tail....like Uncle Brian's cows. This is beef!" he gestures insistently at the plate. "Have I met this beef?" Usually the answer is 'no,' but we did buy a portion of the last cow that Brian slaughtered, so it's possible that we've met the beef. 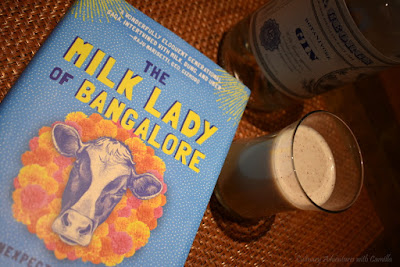 Given that milk was at the root of this tale, I wanted to make something with milk. And I wanted it to have an Indian tie. I thought about sharing the Golden Milk Latte I had just made with my cooking kids, but I've shared a similar recipe before. Then I came across a drink called 'thandai' which literally translates to 'something that cools.' I was intrigued by the addition of bhaang (a marijuana derivative) to make thandai a festive libation. So, I swapped in my favorite gin as I thought the floral spiciness would match the thandai well. Please note that this is not a traditional recipe for thandai; I created it based on what I had in my kitchen. 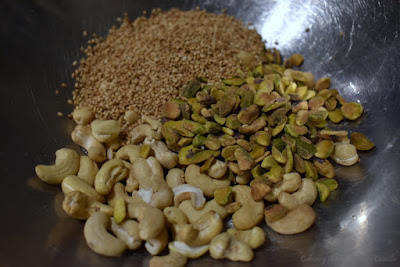 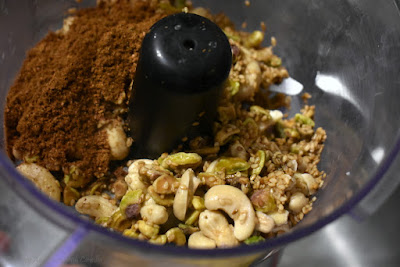 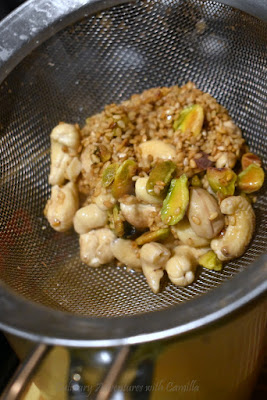 Drain nuts and seeds; set aside. 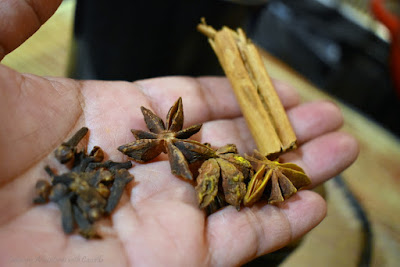 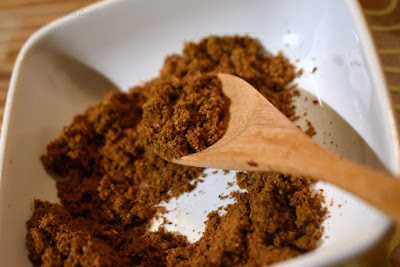 Place the drained nut mixture, the spices, and 1/2 C soaking liquid in the bowl of a food processor. Blend until a thick paste forms. If you need more liquid, add it. 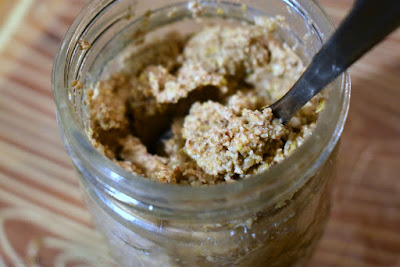 Cocktail and/or Mocktail
Place 4 T paste and 4 T brown sugar in a mixing bowl. Pour in milk and whisk until well combined. Strain through a fine mesh strainer to remove the solids. For the mocktail, serve as is. For the cocktail, place 1 ounce gin in a glass and top with 4 ounces of thandai. Garnish with rose petals and freshly grated nutmeg, if desired. Serve immediately.

Here's what everyone else read in February 2018: here.