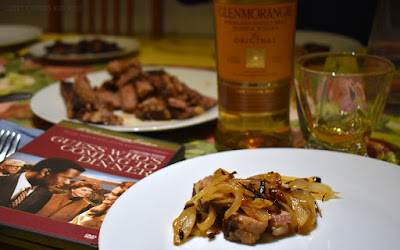 For the February edition of Food'N'Flix, Evelyne at CulturEatz hosts as we watch Guess Who's Coming to Dinner*. Here's her invitation.

I had never heard of the movie before this month, so it was definitely a treat to discover it. But I mentioned it to my sister-in-law who said, "Great movie!" And, when I came home from work yesterday, my mom was there with D. They were watching it. She commented, "I saw this when I was 17...I definitely got more out of it today."

Released in 1967, the film stars Spencer Tracy, Sidney Poitier, and Katharine Hepburn and addresses interracial marriage as Joanna Drayton surprises her parents (Tracy and Hepburn) by bringing home her new fiancé, John Prentice (Poitier). Add to the surprise that, not only is he African-American, he is considerably older than she, he is a widow, and they only met ten days before. But, sometimes, when you meet 'the one', you just know, right?

One of my favorites lines is when Christina (Hepburn) chides her husband Matt (Tracy): "She's 23 years old, and the way she is just exactly the way we brought her up to be. We answered her questions. She listened to our answers. We told her it was wrong to believe that white people were somehow essentially superior to black people or the brown or the red or the yellow ones, for that matter. People who thought that way were wrong to think that way. Sometimes hateful, usually stupid, but always wrong. That's what we said and when we said it, we did not add, 'but don't ever fall in love with a colored man.'"

Needless to say, there was lots of interesting conversations between her parents, between her father and their family friend Monsignor Ryan, between the mothers, between the fathers. And, then, all of them all together. I won't tell you what happens...you really should just watch it! But, I will say, that I thoroughly enjoyed the film though there wasn't a whole lot of food in it. 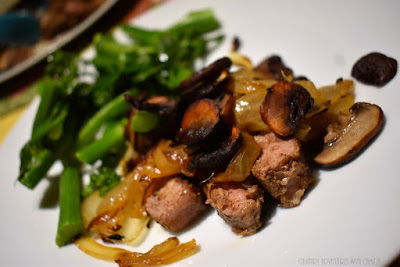 On the Plate
Given the title of the movie, I would have actually expected more food. There was some, but not a lot. We see them eating sandwiches on the terrace. Tillie, the domestic help, says she is going to serve celery soup though Joanna says, "Turtle Soup!" The Draytons pull into an ice cream shop and have fresh Oregon boysenberry ice cream. Christina Drayton sure drinks a lot of black coffee. I'm with her on that! 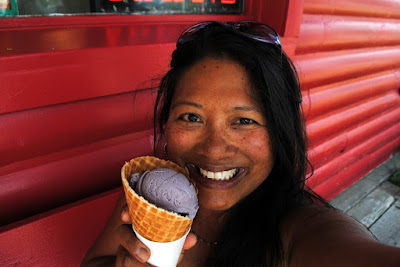 I've actually had fresh Oregon boysenberry ice cream! It's delicious. We always stop at a spot on our 10-day summer camping trip and it's a favorite. But it's not berry season and it's definitely too cold for ice cream these days.

So what inspired me into the kitchen were the steaks that were delivered for the dinner...and the drinks. When then parents are convened in the living room for cocktails, the mothers drink sherry; the priest drinks bourbon; and the dads drink scotch. I had hoped to see the dinner spread as they all walk into the dining room at the end of the movie. But just as the camera could have panned in, following them in as they take their seats, the credits ran. So, I still have no idea what Tillie served. I'm going with steaks...and scotch! 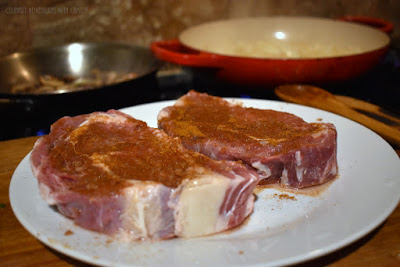 Let steaks rest at room temperature for at least 30 minutes before cooking - and up to an hour. Sprinkle both sides with salt, pepper, smoked paprika, and ground cumin.

Melt 1 T butter in 1 T olive oil on a griddle or grill pan. Heat the point that it is almost smoking. Sprinkle another layer of salt and pepper over the meat, pressing them into the meat.

Place your steak - newly sprinkled side down - in the pan. Depending on thickness, you will want to cook the steak for 3 to 5 minutes on each side. Sprinkle the top side with salt and pepper before flipping. You should have a nice crust formed with an internal temperature of about 130 degrees F for medium. Remove from pan and tent with foil. Let rest for at least 5 minutes before serving. I sliced the steak and served it with caramelized onions, crisped mushrooms, and broccoli. The land of Scotch whisky is not as complicated as you might think. Let's start with this, though, it’s spelled 'whisky' without the 'e,' unlike American whiskies such as bourbon and rye. Then, whether you’re pouring a single malt whisky or a blended Scotch whisky, expect it to taste smoky.

Some technical things...scotch can be made with other grains, but it must contain malted barley. Single malt is pot-distilled and, unlike bourbon, scotch has to age in oak casks for at least 3 years. The tasting profiles of scotch run the gamut from floral to spicy and salty to sweet. 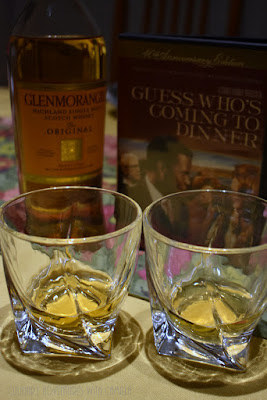 For this dinner, I poured a Glenmorangie 10-year Single Malt Scotch Whisky. Note this: there are plenty of whisky snobs out there. I am not one of them. The bottom line is that if you like it, then it is great whisky. I prefer smooth whiskies and this is an excellent and affordable bottle. On the nose, I sense a soft sweetness. On the tongue, it's heftier than I would have thought with subtle spices and a touch of honey. I like that this is clean and well-balanced.

Next month, Ali from Fix Me a Little Lunch will be hosting the group as we watch Runaway Bride. Stay tuned for that invitation.