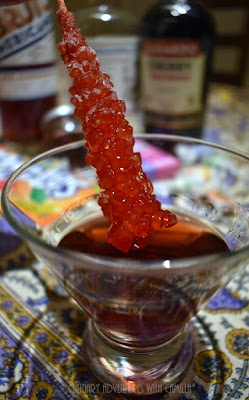 For the first Food'N'Flix of 2018, Amy at Amy's Cooking Adventures hosts as we watch Wreck-It Ralph*. Here's her invitation.

I know I've seen the movie before, but it's been awhile. Thankfully, we actually own this one. When I remembered Amy's Food'N'Flix pick, I had the boys pop it in on New Year's Eve. Then we had some fun with candy. Lots and lots of fun. But I'll get to that.

Wreck-It Ralph, the title character, opens the film with this...

My name's Ralph, and I'm a bad guy. Uh, let's see... I'm nine feet tall, I weigh six hundred and forty-three pounds. Got a bit of a temper on me. My passion bubbles very near the surface, I guess, not gonna lie. Anyhoo, what else? Uh... I'm a wrecker. I wreck things, professionally. I mean, I'm very good at what I do. Probably the best I know. Thing is, fixing's the name of the game. Literally. "Fix-It Felix, Jr." So yeah, naturally, the guy with the name Fix-It Felix is the good guy. He's nice enough as good guys go. Definitely fixes stuff really well. But, uh, if you got a magic hammer from your father, how hard can it be? If he was a regular contractor, carpenter guy, I guarantee you, you will not be able to fix the damage that I do as quickly. When Felix does a good job, he gets a medal. But, are there medals for wrecking stuff really well? To that, I say, ha! And no, there aren't. For thirty years I have been doing this, and I have seen a lot of other games come and go, it's sad. Think about those guys at Asteroids? Boom, gone. Centipede? Who knows where that guy is, you know? Look, a steady arcade gig is nothing to sneeze at, I'm very lucky. It's just, I gotta say, it becomes kinda hard to love your job... when no one else seems to like you for doing it.

So, you can imagine he spends the rest of the film transforming into a good guy, right? The film is colorful and fun; the characters were equally so. As someone who was a child in the 80s, I was tickled to see QBert, PacMan, and other video game characters I knew and loved. 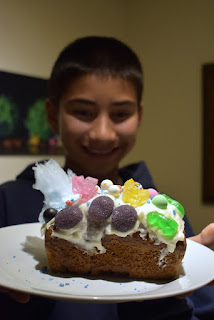 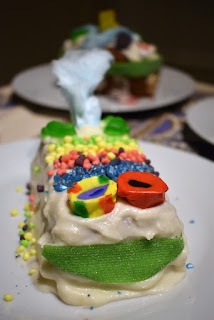 On the Plate
The bulk of the movie takes place inside the Sugar Rush game. There's lots and lots of candy, as you can imagine. Think chocolate moats, peppermint trees, Mentos stalactites over a Diet Coke lake, and so many more that your teeth almost begin to ache just watching the movie. D and I went to the candy store and picked up a ridiculous amount of candy. Then I whipped up some mini loaf cakes and buttercream. And we had a blast making some candy-laden cakes. 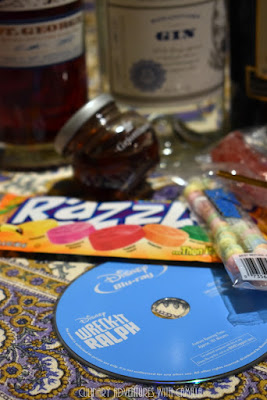 In the Glasses
Inspired by Wreck-It Ralph calling PacMan a "cherry-chasing dot muncher" - and the jar of Griottines in the cupboard - I decided to create some perfect New Year's Eve cocktails. 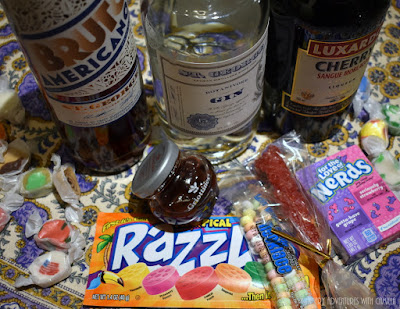 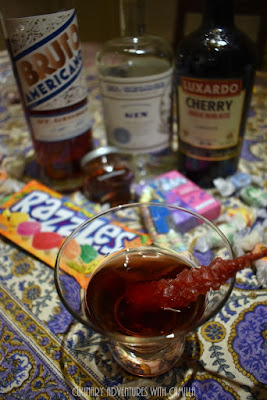 Since gin is my booze of choice, I decided to make a Wreck-It Ralph negroni. 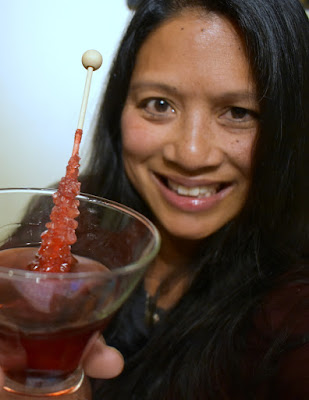 Procedure
Place the boozy cherry in the bottom of your glass and ice into the cocktail shaker. Pour in the gin, Bruto Americano, and cherry liqueur. Shake for at least 15 seconds and strain into your serving glass. Garnish with rock candy. Enjoy! 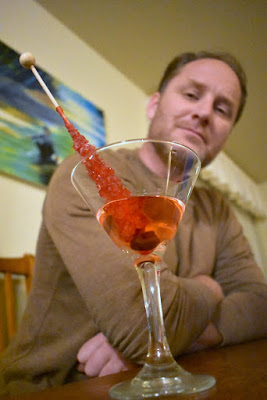 Since Jake received a great bottle of vodka from a White Elephant gift exchange, and had a tasty beverage at the same Christmas party, I decided replicate that drink with a Wreck-It Ralph tie-in.


Procedure
Place the boozy cherry in the bottom of your glass and ice into the cocktail shaker. Pour in the vodka, St. Germain, cherry liqueur, and lemon juice. Shake for at least 15 seconds and strain into your serving glass. Garnish with rock candy. Enjoy!

I'm looking forward to seeing where the Food'N'Flix crew goes with this movie. And, if you'd like to join the fun, you still have four weeks to watch and be inspired.
*This blog currently has a partnership with Amazon.com in their affiliate program, which gives me a small percentage of sales if you buy a product through a link on my blog. It doesn't cost you anything more. If you are uncomfortable with this, feel free to go directly to Amazon.com and search for the item of your choice.