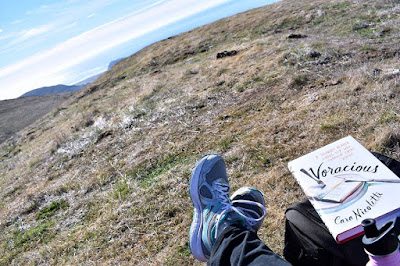 Over the weekend, Jake decided he wanted to move his drumset out of our bedroom into the living room where it could live next to D's piano and beside R's mandolin and music stand. It makes so much more sense there. But that migration meant that my enormous bookshelf had to move, too. He did that without me emptying it out. Crazy man.

One great thing about that shift: I am now able to open the doors to my bookshelf all the way...instead of trying to squeeze between the wall and a chair to grab things out of there. And, when I did that, I found books I've been intending to read but forgot that I had. Whoops. 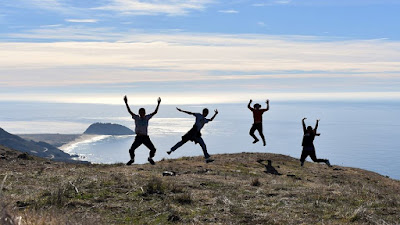 On New Year's Day we decided to do a hike I've been wanting to try. Little did I know it was a mile and a half straight up a mountain. But what does that mean? It means, great views at the top! While the boys flew their glider, I plunked myself down on the plateau and pulled out one of my newly rediscovered books: Voracious: A Hungry Reader Cooks Her Way Through Great Books by Cara Nicoletti.*

I quickly breezed through half of the book up there. On a cliff. On the edge of the continent. It was refreshing. And, over the course of a few evenings this week, I've voraciously devoured Voracious.

Let's get this out first: It's not a novel. There is no plot. This is a collection of musings by Nicoletti who is a former pastry chef, butcher, and author of the literary recipe blog Yummy Books. More importantly, she's an avid reader whose tastes in books seem very closely aligned with my own.

She reminisces about books through three stages in her life: childhood, adolescence and college years, and adulthood. Her narrative voice is candid and appealing.

Here's an example in her chapter about Catcher in the Rye. "I know I'm not alone in saying that middle school, particularly eighth grade, was absolute hell. It was so bad, in fact, that even now I tend to distrust anyone who looks back fondly on the ages eleven to fourteen." After her English teacher gives her a copy of the book, she continues, "The novel was exactly what I needed at the time - a testament to the fact that adolescence is agonizing, confusing, lonely." Eventually she shares a recipe that was inspired by Holden's malted milk.

Not only did Voracious remind me of books I've loved - Pride and Prejudice, The Witches, Strega Nona, To Kill a Mockingbird, If You Give a Mouse a Cookie, Anna Karenina, Charlotte's Web - but it piqued my interest in books I haven't ever read. So, when I received a gift card from a friend, I ordered a few that Nicoletti inspired me to pick up. Stay tuned on those.


This book is a treasure. It's a beautifully laid out, eloquently written, and inspires you to track down copies of other books. What a great read for any literary enthusiast who loves to read recipe books before bedtime!

Here's what everyone else read in January 2018: here.