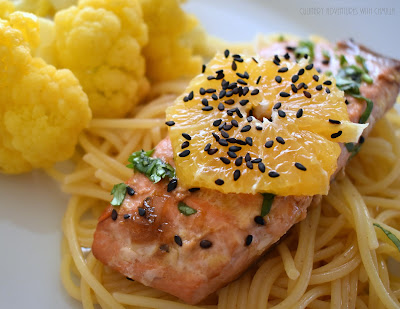 Here we are at Day Two of the #7Days7ColorsChallenge! You can read more about it: here. Today is brought to you by the color orange. 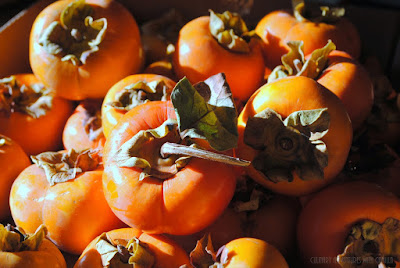 Years ago, when we lived in the Mid-West, I had a disconcerting conversation with another parent at my son's third birthday party. "Do you have any orange food?" he asked. "My daughter is an on orange food kick," he continued, "and she will only eat orange food."

Oh, sure. I have some carrots and mandarins. Will that work?

She likes cheese, then. I have Colby which has orange spots in it. Do you want that?

"Do you have any slices of American cheese?"

I finally found a package of Goldfish in the pantry that kept her happy till the cupcakes which weren't orange. But I'm pretty sure she did eat her cupcake.

When I say orange food, I'm not talking about processed cheese products. I'm talking about carrots, pumpkins, peppers, and tree pumpkins?! Last autumn I was at an event where a gingerbread cake was served with cubes of fresh persimmon scattered over the top. One of the guests asked, "What's a persimmon?"

Before I could answer, another guest answered, "It's a tree pumpkin."

I almost spit my wine out I was laughing so hard. But it made sense! And, now, my family and I jokingly call these 'tree pumpkins.' Just another orange food we love!

Speaking of orange foods, here are some of my previous recipes that involve foods with natural orange hues...
Carrot Pâté Canapés 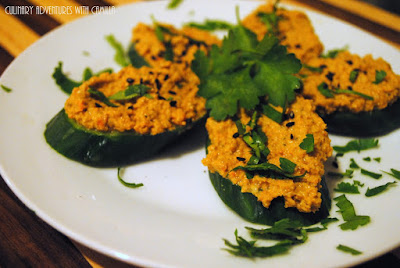 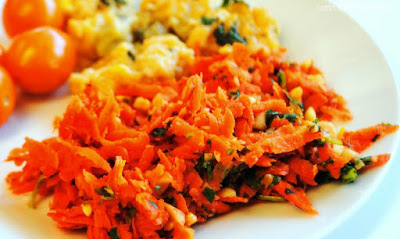 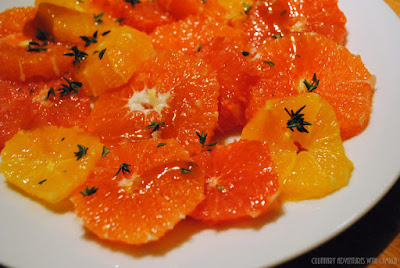 And here's a dinner that I served with orange colors and flavors everywhere. I made citrus-glazed salmon and served it on top of sesame-soy noodles and barely blanched golden cauliflower. I suppose the cauliflower might qualify more a a yellow food, but I counted it as orange! 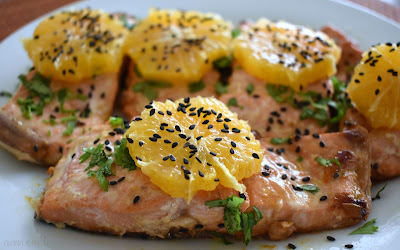 These Citrus-Glazed Salmon fillets are pan-fried in a gorgeous honey-orange-garlic sauce, with a splash of soy for added umami flavor! I was lucky enough to pick up some wild-caught, local salmon. Generally, I serve 4 to 6 ounces per person. 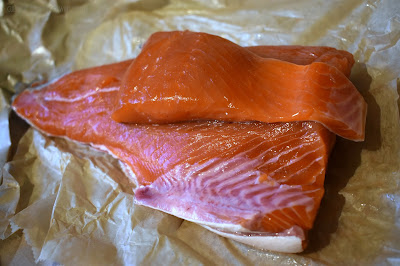 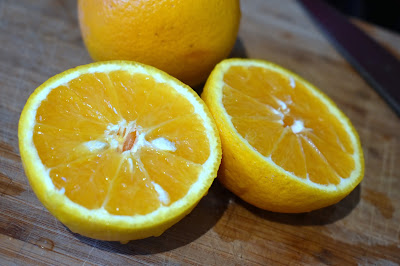 Procedure
Heat oil in a pan or skillet over medium heat. Add the salmon, skin-side down, and sear on one side for approximately 3 to 4 minutes. Flip salmon and sear for another 2 minutes. Pour in the orange juice and allow to reduce to half the quantity, approximately 1 to 2 minutes. Add the garlic and cook until fragrant. 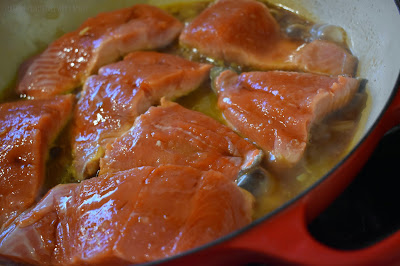 Add in the honey, soy sauce and shallots. Bring to a simmer until reduced to a nice syrup develops. 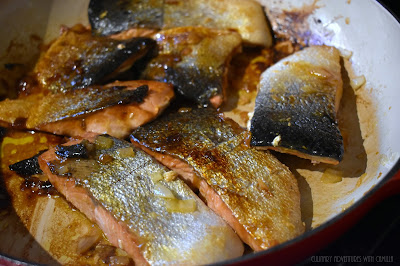 Remove from heat once the salmon is cooked through. Turn the salmon to get it completely covered in the citrus glaze. Season with salt and pepper to your tastes. Drizzle with the sauce to serve. Sprinkle with fresh cilantro, place an orange slice on top, and garnish with black sesame seeds.