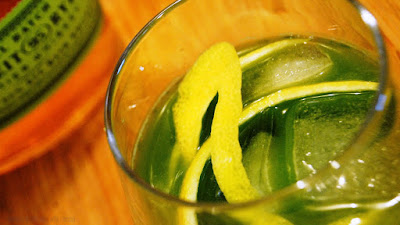 For October's Food'N'Flix, Kimberly at Coffee and Casseroles asked us to watch Ghostbusters. Here's her invitation.

Let me start with this: I am humor-challenged. Comedies aren't usually my genre of choice and silly comedies are even less so.

But perhaps more than that, when I watch movies, I ask myself, Did this movie need to be made?And, in this case, I heard Jeff Goldblum in my head - from the original Jurassic Park movie - Yeah, yeah, the filmmakers "were so preoccupied with whether or not they could that they didn't stop to think if they should."

I really did try to give this film a chance because I remember liking the original when it came out in 1984...when I was 11. Maybe I was more tolerant of silly back then. But, I just didn't find this film funny and I really don't think it stands on its own. It trades a lot on the first movie. And, honestly, one of the only things that tickled me was seeing the cameos from some of the original cast members.

Since this is a post for Food'N'Flix, you know I have to watch the film with a foodie eye. I was pleasantly surprised to find many, many food references. I did chuckle at the soup crisis...

Abby (played by Melissa McCarthy): I have one wonton! I have a tub of soup and one split wonton!
Erin (played by Kristen Wiig): I'm sorry you're having a soup crisis.
Abby: There isn't even any meat in there. That's just a carrot.

And Abby's rant continues later: "I’m just looking for a reasonable ratio of wontons to broth.  This is absolute madness."

The other quotation that stuck with me was when Patty (played by Leslie Jones) comments that "it smells like burnt baloney and regrets down here." But, I don't eat baloney and can't imagine a recipe that would be improved by burnt baloney!

Jillian (played by Kate McKinnon) laments the irresistibility of Pringles. "Just try saying no to these salty parabolas!" she cries. I said 'no' and skipped trying to recreate my own Pringles!

So, while I was underwhelmed by Ghostbusters, the remake, there was quite a bit of tabletop inspiration. I will say that when the boys came back, they saw the DVD on top of the entertainment center and asked to watch it. They appreciated the silliness and thought that the Chris Hemsworth character was hilarious. They did keep calling him 'the ditzy Thor' though. That made me laugh!

Next month, Amy at Amy's Cooking Adventures hosts as we watch Planes, Trains, and Automobiles. Stay tuned for more on that. 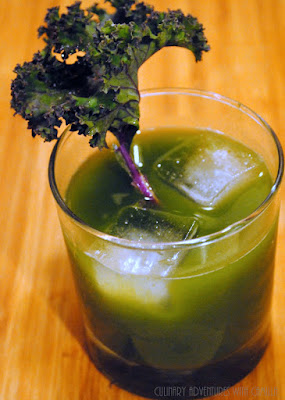 In My Glass
As the boys were with my parents for Fall Break last week, Jake and I imbibed more than we usually do on weeknights. We uncorked wines, popped beer tops, and created cocktails. I was initially going to create a cocktail inspired by the Stay Puft Marshmallow Man, but it was too warm for any spiked hot chocolate libations.

Then I considered making a bright green cocktail in honor of Slimer. Slimer makes in appearance in just about every iteration of Ghostbuster - from the original movie to the sequel and from the animated TV series to the video game.

One funny note: when my sister-in-law saw this title in her social media stream, she thought it read 'Slimmer Sippers.' Ooooo...maybe I could get behind this cocktail, she said, thinking that it was a low-cal libation. Sorry, Liv. No, it's not! 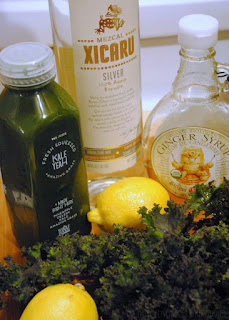 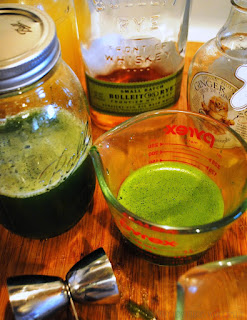 But, as a general rule, I steer clear of food coloring. So, I decided to use kale juice to make two green sippers. The reason I needed to make two versions: he likes tequila while I'm a bourbon girl!

Slimer Sipper #1, like a Whiskey Sour
Ingredients makes one cocktail

Procedure
Mix all of the ingredients - through kale juice in the list above - in a cocktail shaker or mason jar filled with ice. Shake vigorously and strain into a cocktail glass. Add a few ice cubes to the glass. Garnish with lemon curls. 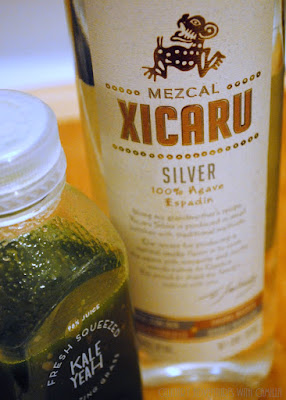 Slimer Sipper #2, like a Margarita
Ingredients makes one cocktail