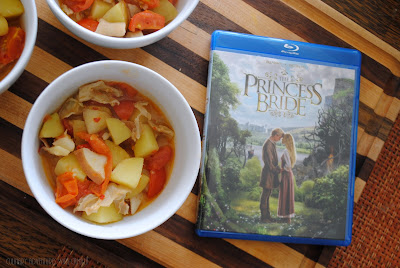 I am so excited about this month's Food'N'Flix event hosted by my friend Deb over at Kahakai Kitchen. You can read her invitation: here. She asked us to watch The Princess Bride.* It is one of my favorite movies. Ever.

I was, admittedly, a little horrified that it came out 30 years ago. Really?!!? But...I did watch it for the first time when I was in high school and I graduated over 25 years ago, so the numbers make sense. Still...

Based on the 1973 book by William Golden, the movie version includes an impressive list of actors - Peter Falk, Fred Savage, Cary Elwes, Robin Wright, Chris Sarandon, Mandy Pantinkin, Andre the Giant, Wallace Shawn, Billy Crystal, Carol Kane, and others - who bring mirth and memorable quotes to the screen. Oh, and there's fencing, fighting, kissing, torture, death, true love, giants, pirates, and rodents of unusual size! If you've seen it, what's your favorite quote? If you haven't seen it, you're missing out!

On the Plate...
While this isn't a foodie movie per se, I found tons of inspiration! Given that I'm picking up my half-lamb share from a farmer friend this week, I considered a nice MLT! It, according to Miracle Max, rivals true love.

"Sonny, true love is the greatest thing, in the world-except for a nice MLT – mutton, lettuce and tomato sandwich, where the mutton is nice and lean and the tomato is ripe. They’re so perky, I love that."

I thought about mixing up my own version of the Painkiller cocktail after this exchange between Westley and Humperdinck...


Westley: To the pain means the first thing you will lose will be your feet below the ankles. Then your hands at the wrists. Next your nose.
Prince Humperdinck: And then my tongue I suppose, I killed you too quickly the last time. A mistake I don’t mean to duplicate tonight.
Westley: I wasn’t finished. The next thing you will lose will be your left eye followed by your right.
Prince Humperdinck: And then my ears, I understand let’s get on with it.
Westley: Wrong! Your ears you keep and I’ll tell you why. So that every shriek of every child at seeing your hideousness will be yours to cherish. Every babe that weeps at your approach, every woman who cries out, “Dear God! What is that thing,” will echo in your perfect ears. That is what to the pain means. It means I leave you in anguish, wallowing in freakish misery forever.

Westley has poisoned a goblet of wine and asks Vizzini to divine which is which. "The battle of wits has begun. It ends when you decide and we both drink. We find out who is right and who is dead." 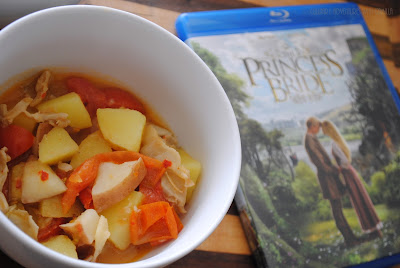 Inspired by Sicilian penne all'arrabbiata, I decided to prepare a razor clam appetizer with that flavor profile - tomatoes, chiles, garlic, and cheese. Yum.

Procedure
But first you have to clean the razor clams... 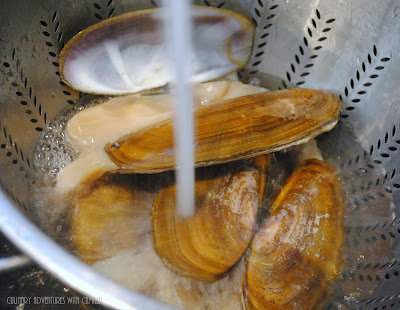 Step One: Place razor clams in a large bowl and pour hot water over them. Let them soak till the shells open. Pull the meat from the shells. 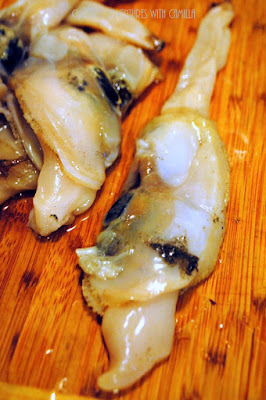 Step Two: Trim off the dark end of the siphon tube and cut open the clam from one end to the other. Lay the clam flat and snip around the gills, mouth, and digger. It should look like this. 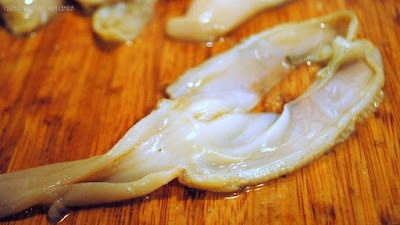 Step Three: Snip around the dark stomach and remove any other veins and grit you might find. Once you've cleaned the clam, chop it into bite-sized pieces. Now you're ready to cook it! 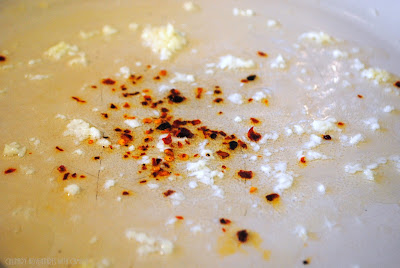 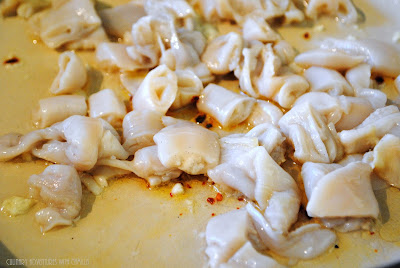 Increase heat to high, add razor clams and wine, and cook, covered, until clams are just cooked through, approximately 3 minutes. 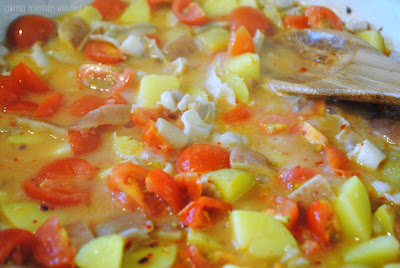 Add in the potatoes and tomatoes. Cook for a minute or two. Season to taste with salt and pepper; toss razor clams to coat with sauce. Fold in tomatoes. Transfer clams to a serving bowl and let each diner grate cheese over the top.

You still have a week or so if you want to join The Princess Bride fun. Or, next month, Evelyne from CulturEatz will be hosting Volver. Stay tuned for more information about that.