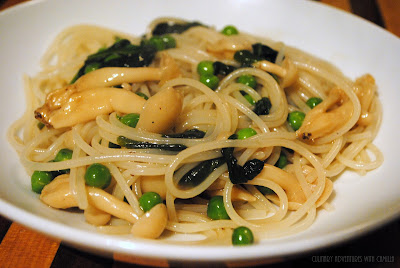 As January continues, I am forging ahead with my renewed Foodie Reads Challenge. My copy of The Vegetarian by Han Kang* was next on my nightstand. So, over the course of a few evenings, I read it. 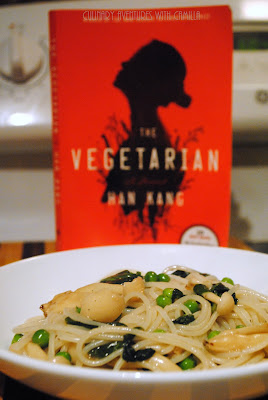 On the Page...
While the book was provocative, I can't say that I really enjoyed it. Honestly, I almost put it down.

Marital rape, a father force-feeding a grown daughter, attempted suicide...and that was only in the first part of the novella. This book is comprised of three parts. Part one is told from the standpoint of the husband of the vegetarian; part two is narrated by the brother-in-law of the vegetarian; and part three follows the sister of the vegetarian. And all of them were uncomfortable.

I will not say too much more - just that the people in her life are baffled by Yeong-hye's abrupt decision to give up meat. This was one passage from a dinner party to which Mr. Cheong brought Yeong-hye.

"People mainly used to turn vegetarian because they subscribed to a certain ideology...I've been to various doctors myself, to have some tests done and see if there was anything in particular I ought to be avoiding, but everywhere I went I was told something different...in any case, the idea of a special diet always made me feel uncomfortable. It seems to me that one shouldn't be too narrow-minded when it comes to food" (p.31).

I had thought Yeong-hye might have some cogent arguments for vegetarianism, but, she didn't; she attributed her drastic lifestyle change to a dream. It was more of a nightmare. 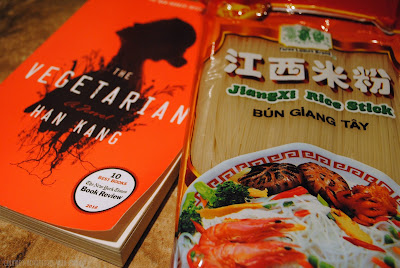 On the Plate...
Yeong-hye questioned the need to eat and, even, the need to live. So, food wasn't high on her list of priorities. Still, I was inspired into the kitchen to make stir-fried noodles with mushrooms. Her husband was lamenting the menu shift at his home. "Her fragrant, caramelized deep-fried belly pork was achieved by marinating the meat in minced ginger.... Her signature dish had been wafer-thin slices of beef seasoned with black pepper and sesame oil" (p.22).  "On weekends, she prepared seasoned vegetable side dishes for us to eat during the week, and even made stir-fried glass noodles with mushrooms, instead of the usual meat" (p.25). 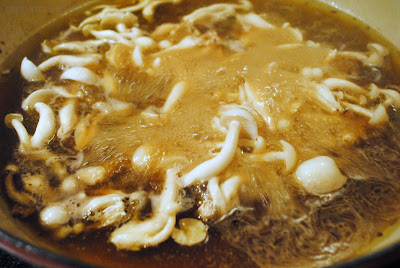 
Procedure
Cook noodles according to package directions. Set aside.

In a large, flat-bottom pan, heat 1 t sesame oil and 1 t olive oil.  Cook the green onion and garlic until softened. Add in the mushrooms. Cook for 3 to 4 minutes. Pour in the stock and bring to a simmer. Add in the spinach and peas. Cook until the green of the peas brightens and the spinach just wilts. 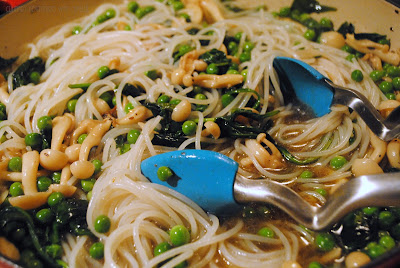