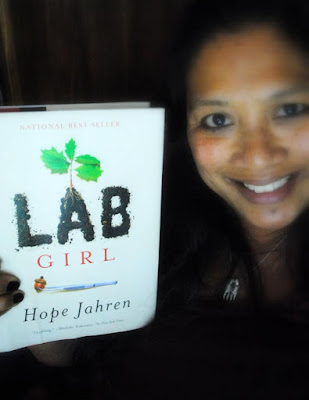 Let me start by admitting: This is not a foodie read per se. A scientist pal of mine recommended Lab Girl by Hope Jahren* and I was happy to dig into a book that was outside of my usual genre. However, Jahren does write about food throughout the book and there were several foodie passages that either taught me something or had me chuckling. So, I decided to share the book with Foodie Reads Challenge..

Jahren alternates between autobiographical chapters and chapters about the lives of the trees and other plants she studies. Her prose expertly balances candor and humor. I'll be honest, I was a fan the first time she wrote: "female scientist" (yes, gender designator as an adjective not a noun!).

Square Salt
"Each grain of salt in a saltshaker is a perfect cube when viewed up close. Grind one grain into a fine powder and you have shattered it into millions of tiny, perfect cubes. The inescapable cube shape of salt persists because the very atoms that comprise pure salt are bonded together in the shape of a square scaffold that outlines an endless number of cubes."

Dinner-on-a-Stick
"On the way out of town we'd buy one Duraflame log for each day of the trip and a bunch of random food, and consider ourselves prepared for camping. ...Dinner-on-a-stick meant that each person found a stick and put whatever they wanted on it and then stuck it in the fire and ate it, and that was dinner. The only rule was that if you stumbled upon something really good, you afterward had to make enough for the whole group.... Dumpling was on a roll during that trip and actually managed to poach pears using a Coke can that had been torn in half and ingeniously skewered on a stick. We all agreed that his Hershey's chocolate-drizzled creation was the absolute pinnacle of camping cuisine...."

A Whole Paycheck Lunch
"Having never actually been inside of a Whole Foods, Bill was immediately enthralled after we walked through the door. He went directly over to a plastic package that cost about thirteen dollars and contained six capers, each the size of a golf ball. ...I found him marveling at a refrigerated trough of soft French cheese. ...Bill loaded our two-hundred-dollar lunch into my car by himself. ...Two hours later we were sitting in the lab eating 'Rockefeller Hot Pockets' which are composed of a slice of jamon iberico wrapped around a spoonful of sturgeon caviar and microwaved for ten seconds."

Though nothing inspired me into the kitchen, I have dropped two hundred dollars in Whole Foods more times than I care to admit and we love poached pears though I have never had to do it over a Duraflame log. I thoroughly enjoyed this book and look forward to reading more of her work. Thanks for the recommendation, Lou.


Here's what everyone else read in January 2017: here.