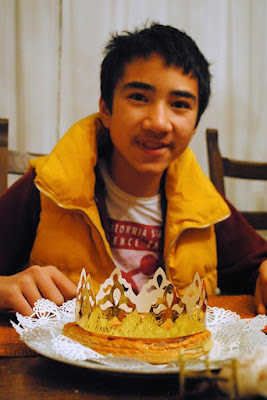 While Befana left D a Tronchetto di Natale, she left R a Galette de Rois. He has always loved the French Epiphany tradition of slicing into the galette and wondering who will end up with la fève, a small porcelain piece whose discovery renders the finder king (or queen) for the day.

I have to say that in all the years we've been doing this as a family, D has ended up with la fève every single year. Every. Single. Year. I know that baffles and frustrates my scientically-minded R. "Mom, statistically, one of the rest of us should get it. Eventually." We shall see. Well, this was not the year for someone else. The Wom was crowned king this morning. 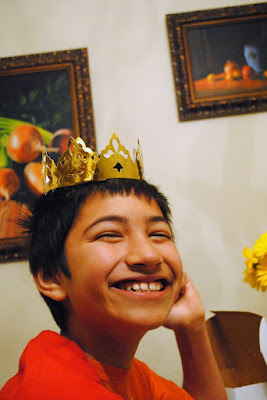 I remember the first time D got la fève. It was a little turquoise-colored ceramic disc; he thought it was an antique. He proudly took it to school and showed his kindergarten teacher who was a friend of mine. When D was smaller, he had a large vocabulary that didn't match his annunciation!  She emailed me.

Camilla, I have to tell you that I had the funniest conversation with D today. He was showing me the artifact he found in the galette de rois. He held it out and said, proudly, 'Ms. Maren, it's ancient.'

But I didn't understand what he was saying. What?

D - I don't know that word. Can you describe what you're trying to say?

One of these years, I will have to make my own cake. Until then, it's Befana to the rescue again!