King of Soups for #TheBookClubCookbookCC 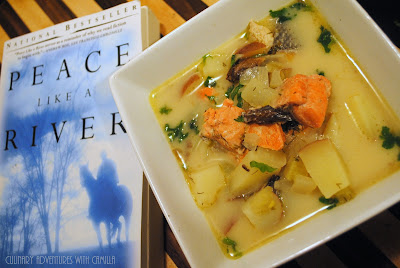 Can you believe we're already in 2016?  The #thebookclubcookbookCC, a year-long journey to explore - and cook from - The Book Club Cookbook, Revised Edition: Recipes and Food for Thought from Your Book Club's Favorite Books and Authors by Judy Gelman and Vicki Levy Krupp,* was on hiatus in December with all the holiday madness. But, we're back! Here's more information about our project.

The 'we', in case you needed a reminder.... Here's the hosting team, in alphabetical order with links to their homepages....

Judy, Vicki, and their publisher, Tarcher-Penguin, have provided the hosting bloggers with copies of the book plus copies to giveaway each month of the project. Woohoo. Incredibly generous.

This month Sarah at The Pajama Chef has selected Peace Like a River by Leif Enger.** Click to read Sarah's invitation: here.

The recipe Judy and Vicki shared for the cookbook selection is for Mrs. Enger's Cinnamon Rolls with Coffee Frosting. Sarah provides the recipe in her invitation post.

Peace Like a River by Leif Enger is an unabashed novel that feels like a Norman Rockwell painting. It's All-American, homey, and rife with little details that are a throwback to another time, to rural Minnesota in the early 60s. I'm not going to say much more about the family at the center of the book, the Lands. There's Reuben, who has "swampy lungs"; his tomboyish, novel-writing little sister, Swede; their dad, a school janitor who loves poetry; and their older brother, Davy, who shot two intruders in the Land home. Davy gets arrested, breaks out of jail, and is on the lam.


What I found more appealing than the characters and the story was the infusion of mysticism into the plot. When the kids were younger, their Dad was carried for four miles by a tornado and was completely unscathed. Then there's the scene that inspired my recipe today.

Oh and, naturally, there's the food. I'm all about the food.

While Peace Like a River is not a foodie read per se, food plays a part in comforting the family and when they sit down at a table to dinner, they are united and centered. Food is almost a character in that it brings the family together. In that way, food takes the place of their long-absent mother.

In the Bowl...
If you've been following me for even a short amount of time, you'll know that I'm much more of a savory-kinda gal. So, sweets - especially first thing in the morning - aren't my cup of tea. I decided to find inspiration in Swede's birthday dinner when they have an unexpected guest at the table. On Swede's birthday, she serves a red potato chowder that their dad made.

"Seasoned with vinegar and pepper, this was our king of soups; a person didn't even want to put crackers in it."

Now for the mystical part of the dinner: "...a pot of soup meant to feed the four of us and no more. A small pot of soup. Was I the only one who noticed...how the pot was replenished as though from a well, how there was somehow enough again and again to fill the ladle?"

While this was the most inspiring passage for me, this chapter was the more devastating of the book. It changed their lives and launched them on a journey that assured that life would never be the same.

King of Soups
I decided to make a red potato chowder, but instead of using creamed pike as described in the book, I used fresh salmon from our bay. 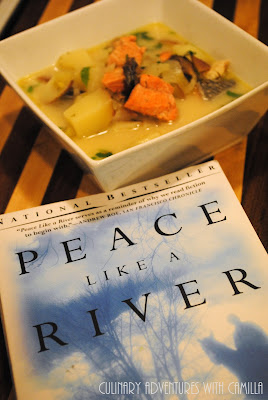 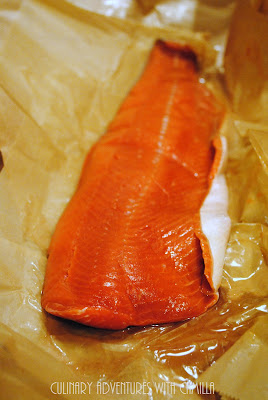 Procedure
In a large souppot, place the smoked fish and half-and-half. Bring to a gentle simmer over medium heat. Once bubbles begin to form around the edges, take the pot off the heat and allow to infuse until it is cool to the touch. Pour the mixture into a large bowl so you can use the same pot.

Cook the bacon in the souppot until some of the fat is rendered and the bacon has started to brown. Add the fennel, celery, and green garlic. Cook over medium heat till the fennel and celery is softened, approximately 10 minutes. 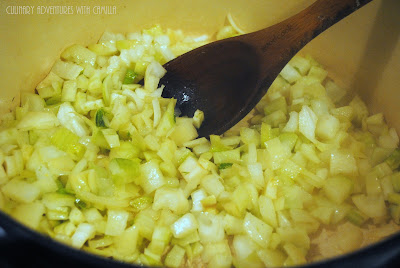 Pour the infused half-and-half back into the pot; pour in milk and add the potatoes. Simmer and cook until the potatoes are tender, approximately 30 minutes. Once they are soft, mash half of them with a potato masher. The soup will begin to thicken. You can leave it as chunky - or make it as smooth - as you like. I left some chunks. Pour in the cream. Then add in salmon. 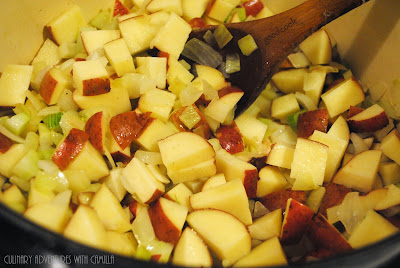 While the soup simmers, use your ladle and spoon the hot liquid over the seafood. The salmon will turn opaque when it's cooked through. This took approximately 15 minutes at a very low heat. Take care not to overcook the salmon. 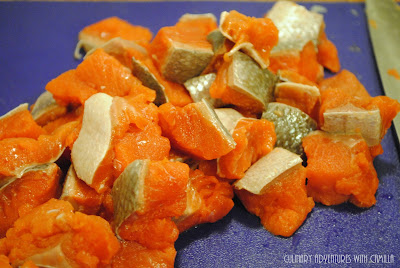 Season to taste with freshly ground pepper. Fold in some fresh herbs and serve immediately. 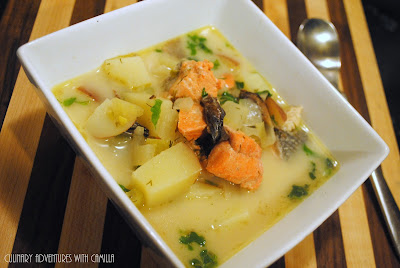 Giveaway
This month Sarah at The Pajama Chef, this month's host, is giving away a copy of the book.* Enter to win a copy of the cookbook so you can join us in future months, if you wish!

One of our lucky readers - US and Canada only! - can enter to win a copy ofThe Book Club Cookbook, Revised Edition: Recipes and Food for Thought from Your Book Club's Favorite Books and Authors by Judy Gelman and Vicki Levy Krupp, courtesy of Tarcher-Penguin. Giveaway runs from January 1st till January 31st at 6 o'clock PM, Pacific time. Please see terms and conditions in the rafflecopter widget below. Many thanks to Tarcher Books. You may find Tarcher: on the web, on Facebook, on Twitter, and on Pinterest.

a Rafflecopter giveaway
*Disclosure: Sarah received a complimentary copy of The Book Club Cookbook, Revised Edition: Recipes and Food for Thought from Your Book Club's Favorite Books and Authors by Judy Gelman and Vicki Levy Krupp as an opportunity to give a copy away. Opinions are our own. We received no further compensation for our posts.


**This blog currently has a partnership with Amazon.com in their affiliate program, which gives me a small percentage of sales if you buy a product through a link on my blog. It doesn't cost you anything more, but if you are uncomfortable with this, feel free to go directly to Amazon.com and search for the item of your choice.