It's not Thursday...or Friday. We're going with 'Champagne Monday' here for #FoodNFlix! 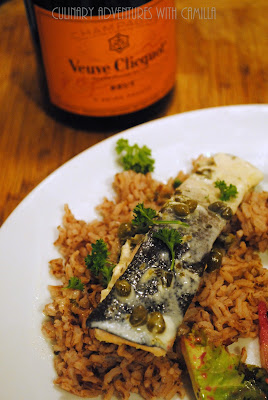 Happy New Year!! Amy at Amy's Cooking Adventures is hosting this first Food'N'Flix event of 2016. Woohoo. It's her first time hosting though she's been cooking with the group for awhile now. The group watched, or rewatched as the case may be, Failure to Launch.*

It's been years since I've seen this film. I probably saw it when it came out in 2006. But I was happy to watch it again with my foodie-goggles on this time. You really don't realize how much food is in this movie!

Here's the basic idea: Tripp, played by Matthew McConaughey, still lives at home with his parents, played by Kathy Bates and Terry Bradshaw. They hire Paula, played by Sarah Jessica Parker, who is, as she puts it a "professional motivator." Her job is to get men to fall for her so that they will want to move out of their parents' houses and forge a life with her. Once they move out, she dumps them. Job done. At least that's how it supposed to work.

So, here's the predictable part...and a spoiler. Drumroll, please. Tripp and Paula end up together, but not without much manipulation on the part of their family and friends. Speaking of friends, Tripp's best buddies and fellow failure-to-launchers are Ace, played by Justin Bartha (love him!), and Demo, played by Bradley Cooper (really love him!!). They are hilarious. I can laugh at the characters...just so long as my boys don't end up with friends like that! Seriously.

Kit, played by Zooey Deschanel, is Paula's surly roommate. She steals the show; I can overlook the mockingbird CPR scene. Yes, don't ask. But it is this exchange between Kit and Paula that inspired my recipe post for this event. 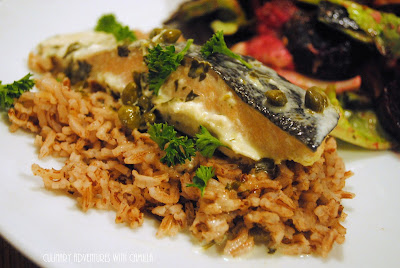 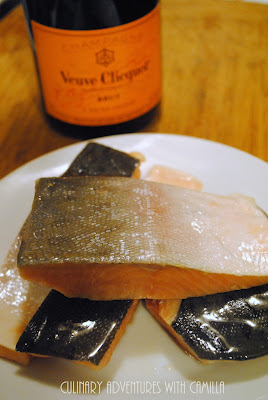 Add the champagne, shallots, and herbs to a large, flat-bottom pan. Bring to a boil. Reduce the heat to medium-low and simmer for 5 minutes. 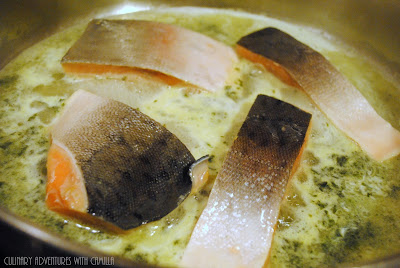 Add the fish to the pan and spoon the poaching liquid over them. Cook until the salmon is firm and cooked through, approximately 10 minutes. Remove from the pan using a slotted spatula.

Meanwhile, in a saucepan, add additional shallots and additional champagne. Bring to a boil and cook until almost all of the liquid has evaporated, approximately 4 to 6 minutes. Add the heavy cream, bring to a boil and simmer until cream thickens and coats the back of a spoon, and is reduced by half, approximately 3 minutes. Whisk in the butter until smooth. Season, to taste with salt, pepper, and lime juice. Fold in the capers.

To serve, place cooked rice on a plate and top with the cooked salmon. Spoon the sauce over the top of the salmon and serve immediately. Garnish with fresh parsley. 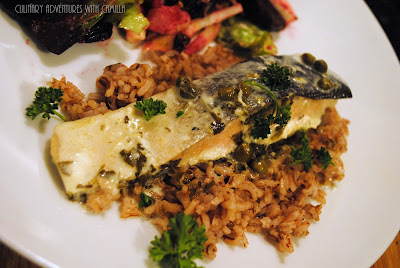