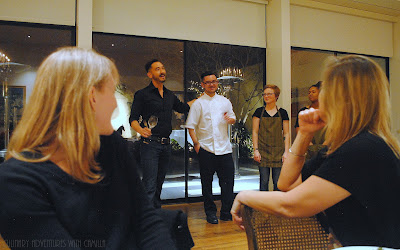 Last night, Carmel Belle hosted its third pop-up dinner at the Monterey Museum of Art, La Mirada. And it was, in my estimation, a veritable love letter to the sea. On the walls hung an exhibit of pieces by artist Armin Hansen. Born in San Francisco, Hansen did live in Monterey when it was a budding artist community. I didn't take any photographs - because they were forbidden! - but this one, Nino, was there as were numerous oils, watercolors, and etchings.


The variance in the styles of the pieces was dramatic. Without knowing they were the work of one artist, one might think it was a multi-artist exhibit.

But one thing was clear: Hansen loved the sea.

Carmel Belle and Chef Kyle Odell sourced the fish from H&H Fresh Seafood, a sustainable small boat fishery based in Santa Cruz who focuses on a hand-caught, sustainable, one rod-one fish model. Hans Haveman was in attendance and spoke passionately about his mission to sell "wild fish from wild fisherman."

One thing was clear: Hans loves the sea. 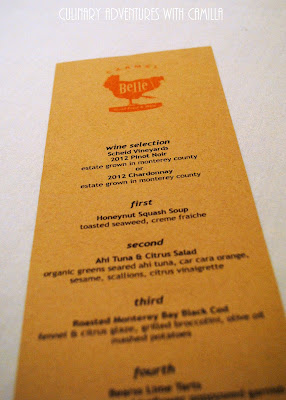 Chef Kyle created a four-course menu that included seaweed, fresh ahi, and fresh black cod. One thing was clear: Chef Kyle loves seafood...and knows what to do with it!

"Don't eat this yet," cautioned Carmel Belle owner Jay Dolata as he welcomed guests to the long banquet table. "That's the garnish for the soup." 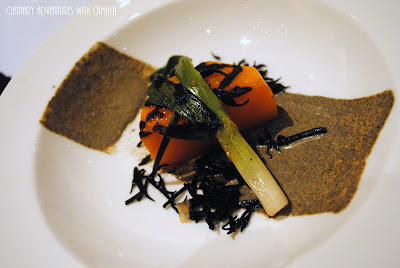 When we were all seated, Carmel Belle servers made their way around the table and deftly poured the squash soup over our grilled squash and seaweed garnish. There were so many flavors in this soup - richness from the crème fraîche, saltiness from the seaweed, a sweet-smokiness from the grilled honeynut squash, and a silkiness from the charred green onion. Wow. One of the gals said, "I wanted to lick the bowl clean!" If I were at home, I probably would have licked the bowl. It was that tasty. 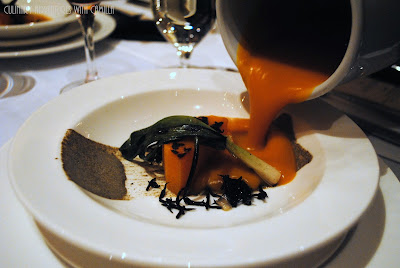 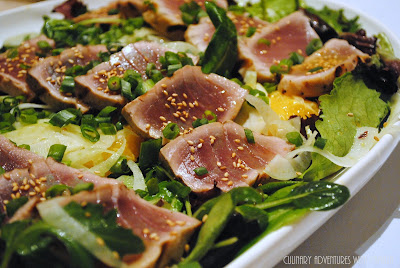 This was probably my favorite course, though that's a tough call to make because all of the courses were so delectable. Crisp greens, seared tuna, and juicy citrus. Yeah, I was in love. And the gals with whom I was sitting commented on liking the family-style plating. We could take as little or as much as we wanted, so there was no waste. And, I'm pretty certain we all had seconds on this one. I was even tempted to take thirds, but I knew we were only halfway through the courses.

Silky smooth mashed potatoes, made with olive oil instead of butter, were the base of the next course: roasted black cod, also called sablefish, and grilled broccolini. 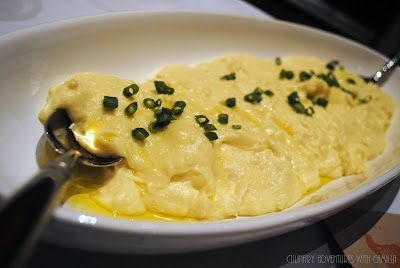 'Buttery,' 'salty,' and 'sweet' were all words that came to mind while eating the black cod. There were so many flavors that melded together. 'Oh, my goodness, I'm stuffed' also came to mind. But that didn't stop me from taking a large piece, devouring it, and nabbing another small piece for a second helping. 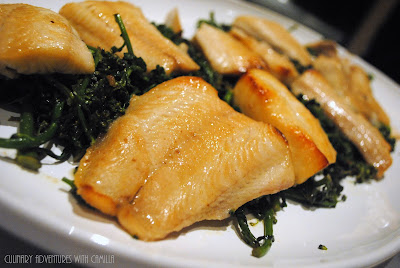 Finally...though I normally do not eat dessert, two elements of this made it irresistible to me: Bearss lime + elderflower. Those are two of my favorites though I would never have thought to marry those flavors. The crust lent just the right amount of bite, the Bearss lime filling had just the right amount of tang, and the pillow of cream was a dream. 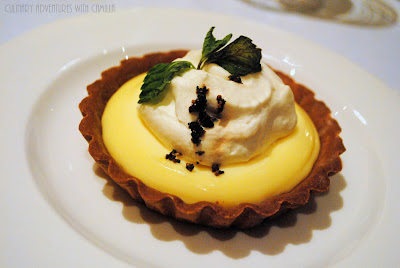 "The grape juice was provided by Scheid Vineyards," read the menu. Always a favorite. We had the choice of the 2012 Pinot Noir and the 2012 Chardonnay. No question which one I picked, right? Given the choice, I'm always a red gal! 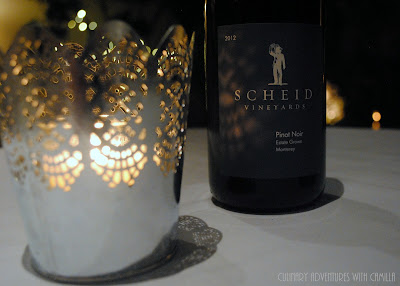 The Pinot Noir boasted aromas of blackberries while on the tongue notes of red berries - currant and raspberries - tangoed with subtle notes of cardamom and clove. It was an enjoyable, vibrant wine that paired easily with everything we ate. 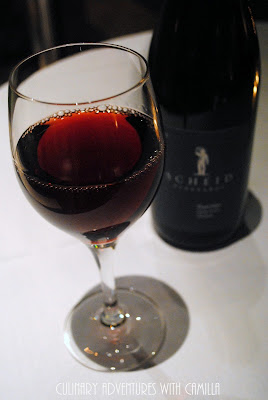 Well there you have it. Carmel Belle's Love Letter to the Sea in their third pop-up dinner. What a menu! What a night! Keep your eyes open for news on a the next pop-up. You don't want to miss out and there are only 30 seats around the table.