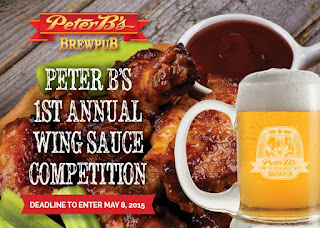 When I saw #PeterBsWingsContest - a cooking contest to create a chicken wings sauce using one of Peter B's brews - announced on Peter B's Facebook page, I was inspired. I created a sauce showcasing a stout then I submitted my Sumpin' Stout Doubled Down Chicken Wings to the contest...and waited. 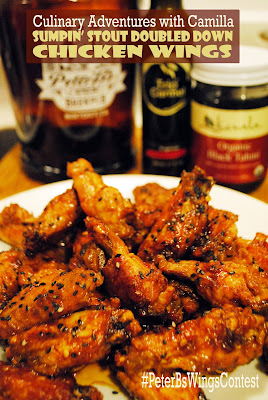 Yesterday, the chef at Peter B's recreated all the entries - or maybe just the finalists' entries, I'm not sure - and six different recipes were judged by the Beer Geeks, the Grub Hunter, and Peter B's brewmaster Kevin Clark AKA Chris, Merideth, Mike, and Kevin. I was oddly nervous that a professional chef was making one of my recipes. Here's the crew, judging the dishes during Pub Talk last night. Here's their blogpost announcing the winner. Woohoo.


Here's what the wings looked like, coming out of Peter B's kitchen...


I was on assignment somewhere else, so I didn't attend the tasting. When I got back home later (and to my laptop), I saw that one of the Beer Geeks had tweeted me: "You won...I took your prize since you weren't here." He was kidding. I hope he was kidding!

I also received a text from another friend and an email from yet another. "I heard your name on KRML this afternoon winning 1st place for some chicken wings! LOL! Way to go!"

I liked the challenge they posed. I really liked the culinary adventure of creating a new dish. And, I'll be honest, I loved winning the contest!

Look for the post of about Jake's and my Peter B's adventure later. That's what I won - dinner for two and a night at the hotel. Can you say 'stay-cation'?? Love it!