By Camilla M. Mann January 04, 2014
Our Cooking Around the World adventure got side-tracked last year. But we are determined to wrap up this culinary project once and for all. So, we're launching into the Rs this year...and we'll get through Z come hell or high water! 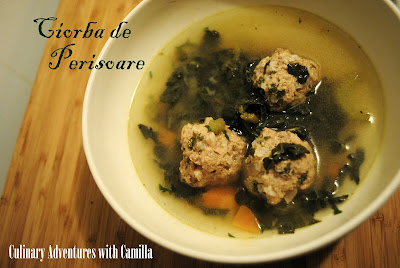 A little bit about Romania...
Romania is located in southeast Europe. It's mountainous in the north while the south is dominated by the Danube valley. The river forms a delta as it approaches the Black Sea, creating a wildlife reserve for countless native and migratory birds.

The Romanian language, like many others in southern Europe, is directly descended from Latin, although Romania is separated from other Romance-language countries by Slav speakers.

Romanian speciality dishes include grilled meatballs, meat wrapped in cabbage leaves, pork stew with garlic and onions and doughnuts made with cream and cheese.

The spine-chilling tale of Dracula was inspired by the 15th century Romanian Count Vlad Dracul whose son was infamous in wartime for impaling captured enemies.

Now to our dinner...

*traditionally this dish uses lovage, but since I didn't have that, I substituted for the herbs that I did have on hand

In a large mixing bowl, place the turkey, half the onions and shallots, and the rice. Season with half the paprika and salt and pepper. Blend until well-combined. Make teaspoon-sized meatballs and set aside

In a large souppot, cook the remaining onion and shallots, carrots, and celery until the onions are softened and translucent. Add in the chicken stock and the remaining paprika and bring to a boil. Reduce heat to a simmer and stir in the kale. Drop the meatballs into the broth and let simmer, covered, for 40 minutes. Uncover, stir in the herbs, and add the vinegar.

Serve hot with a dollop of sour cream, if desired.