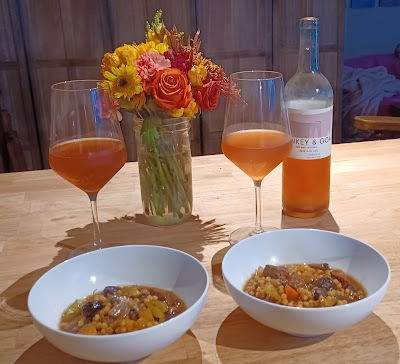 Thanks to Stacy of Food Lust People Love, Sue of Palatable Pastime, Rebekah of Making Miracles, and Wendy of A Day in the Life on the Farm for coordinating this low-stress group, Sunday Funday. This week, Amy of Amy's Cooking Adventures with hosting and she has us cooking like a Viking to celebrate Leif Erikson Day. Here's the line-up...
Leif Erikson and Norse Cooking 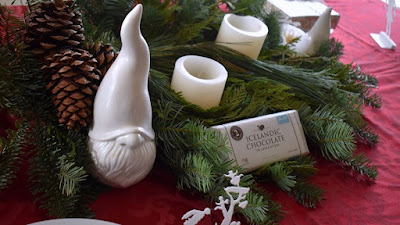 I adore challenging prompts and 'cook like a Viking' certainly qualifies! I started with what I knew about Leif Erikson: Viking. Explorer. Born in Iceland. Died in Greenland. Likely the first European to set foot on North America...a good five hundred years before Christopher Columbus. 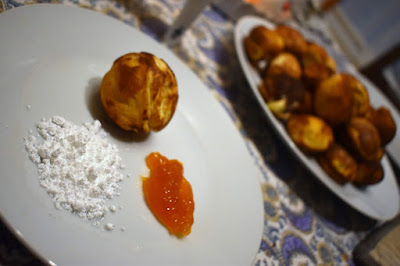 I considered a re-do from my first Jolabokaflod of all kinds of Icelandic edibles. Then there's all of our Danish favorites, including Fastelavnsboller, Mormor Agnes’ Æbleskiver, and pickled fish. But I wanted to do something new and also figured Vikings would probably go for something with less technique and no special equipment required. Then I stumbled across references to...
Suaasat, a Greenlandic Christmas Stew 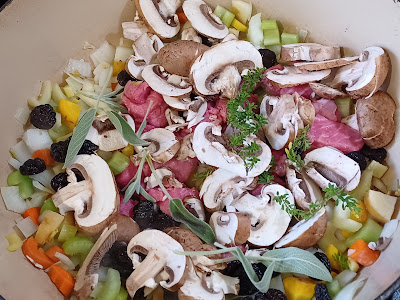 Suaasat is a traditional Greenlandic soup. It was new for me to start with a recipe that begins: "1 kilogram of reindeer or seal meat." But I adapted and we were quite pleased with this easy, one-pot dinner.
Turns out that while it can be made with reindeer, seal meat is tradition though I read that it is always made with whale, caribou, and seabirds. Okay, talk about a use-what-you-have kinda dish. It called for barley which I didn't have. I considered adding quinoa, buckwheat, or rice; then I found some Fregola Sarda in my pantry that looks like barley in size. So, I used that.
This, obviously, isn't a traditional Suaasat. This is typically all just put in a pot with water and boiled till cooked. I browned the meat before braising and used chicken stock instead of just water. I adapted for my California kitchen and palate! But this was delicious and will appear on our table again soon...maybe for Christmas.
Ingredients serves 4 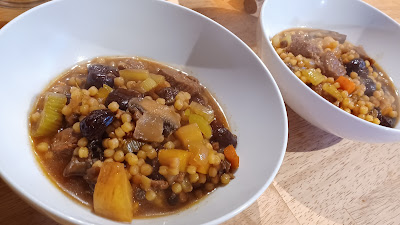 Procedure
Heat oil in a large pot. Add in the meat and brown on all sides. Stir in the onions, carrots, celery, mushrooms, and dried cherries. Add in the herbs and pour in the liquid. Bring to a boils, then reduce heat to a hearty simmer and cook for 1 hour.
Stir in your grain and cook for another 30 minutes. If the stew is thickened to your liking, season to taste with salt and pepper. If the broth is still too thin, raise the heat and cook until desired consistency. Serve hot with sliced bread. 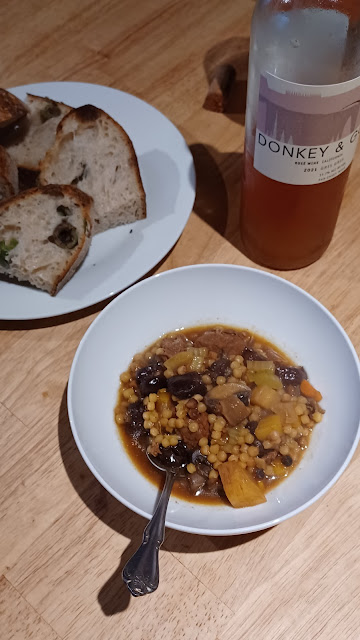 The day that I served this stew also happened to be National Orange Wine Day. No, it's not wine made with oranges. But it's just funky enough to go with a stew that's supposed to be made from reindeer or seals! 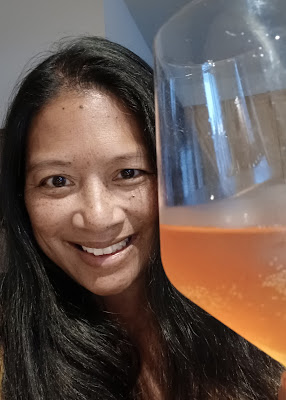 If you are interested in reading about orange wine, you can visit my post Diving into the Skin Fermented Wine Pool of Two Shepherds Winery. To go with my suaasat, I poured the 2021 Gris Gris from Donkey & Goat Winery. They have been a favorite of mine since I made their acquaintance years ago. Between the Brandts of Donkey & Goat and William of Two Shepherds, my skin-fermented obsession is heartily supported.
This 2021 Gris Gris is Jake's favorite of the Donkey & Goat releases this year. And I love that it's a blend that honors the devasting losses from their El Dorado vineyards due to the Caldor Fire. With a much lower yield than usual, they picked everything they could from the vines and blended along with 14% of the 2020 Ramato Pinot Gris to create this fun, funky wine. And despite the usual red-meat-goes-with-red-wine 'rule' this wine was delicious with my Greenlandic Christmas stew.
That's a wrap for this week's Sunday Funday event. We will be back next week with Halloween party treats. Stay tuned!