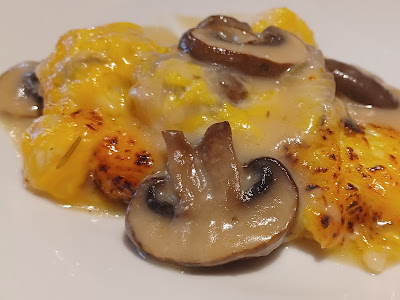 This month the French Winophiles are celebrating Fall with Wendy of A Day in the Life on the Farm at the head. If you are reading this early enough, feel free to jump in on our Twitter chat. We go live on Saturday, October15th at 8am Pacific. Follow the hashtag #Winophiles and be sure to add that to anything you tweet so we can see it. Here's the line-up of articles that the writers have in store for you...
I don't usually tie in a book with my #Winophiles posts unless it's a book we have all agreed to read, but this inspiration was too good to pass up!
Europe by Milk Run
by Rory Moulton 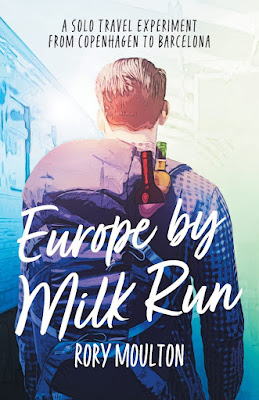 Come Fall, I tend to read more. Maybe it's because I'm out hiking less than during the summer months. Still, This book - Europe by Milk Run by Rory Moulton - was my inspiration for the recipe and wine pairing. So, I'll start with it.
First, I'll be honest: I didn't understand the title. Still don't, actually. Milk run? What does that mean? But I thoroughly enjoyed this travel memoir.
Journalist by trade, Moulton's prose is engaging and captivating. He embarks on this travel adventure in response to an assertion made at a dinner party that traveling Europe "isn't real travel" anymore. Determined to see the real Europe he devises an itinerary that takes him on slow trains (as opposed to bullet trains and other high speed rails) and into locals' homes via AirBnB (versus hotels). So he leaves his wife and son in Colorado for a few weeks for this solo travel experiment, beginning in Copenhagen. He knows that he wants to end in Barcelona, but beyond that, his route is subject to his whims.
I already mentioned that his writing is vivid. So, you really feel as if you are there with him in the hash-laden anarchist neighborhood of Freetown Christiania, herding feral cats out of his room in Amsterdam, and struggling with the language barrier in Saint-Jean-de-Luz in Basque country where the language, Euskara, bears no relationship to French, Spanish, Latin, or any other language that you might speak!
Moulton also peppers his memoir with discussions of history, architecture, and more. I found the discussion of the change in rail gauge - between Spain and the rest of the continent (9 inches wider) - fascinating.
And then there's the food. His descriptions made my mouth water. About the market in Amsterdam: "Patrons looped through stalls, filling rolling baskets and oversize shoulder bags for their homes and hearth: Tomatoes, cabbage, potatoes and broccoli grown in Dutch greenhouses, the world’s most productive. Carrots from Great Britain. Italian meats cured to mouthwatering perfection. Plump and tender Mediterranean olives swimming in oil and herbs. Istrian truffles sat beside gigantic wheels of Gouda cheese, the dairy glory of the Netherlands."
And I chuckled aloud reading his account of the Northern European culinary curiosity that elicits everything from bewilderment and disgust to adoration: "the pickled herring. Okay, maybe not adoration. I counted three pickled herring stands while strolling Cuypstraat. One would seem sufficient. First salted, then pickled, this grub fueled Northern Europe’s dietary needs from Sweden to Iceland and even provided the oil that lit Paris’ first streetlights. But it’s the Dutch who parlayed herring into an empire vastly disproportionate to its size. I admit, I was taking the cowardly way out. Met brood means 'with bread,' which is the wimpy way of taking herring. It’s more palatable this way, what a rice roll is to sashimi. The Dutch way? They hold herring filets vertically above their mouths and slowly lower it in their gullets, chomping and swallowing until the tail."
One more passage that had me nodding in agreement: "Chunks of tender sole fell off the in-bone filet. The outside was crispy and light brown, while zesty lemon balanced the decadent meunière sauce, built from white wine and clarified butter, the dish’s secret weapon. Clarified butter has all water and milk solids removed, so that only the butterfat remains. It’s dairy’s Holy Grail."
But it was this mention that sent me into the kitchen: "My coquilles St.-Jacques arrived, juicy scallops shipped fresh this morning from St.-Brieuc and baked with cream, white wine, cheese and breadcrumbs. The old timer sitting on the barstool next to me folded his book closed and said, 'Good choice,' nodding at the three scallops sitting on a red cast-iron skillet. My first bite confirmed his hunch. The breadcrumbs crunched, and the scallop exploded, its briny juice assaulted the initial creamy tang. 'Oui, very good,' I said." 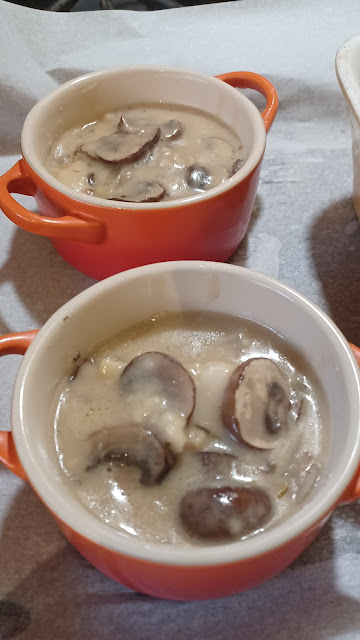 First, it's because October is #MerlotME month and mushrooms and Merlot are a match made in culinary heaven; second, it's because my younger son and self-proclaimed mushroom hater is off at college. It was a revelation to recognize that I can buy and cook mushrooms to my heart's content without someone's sour face glaring at me and chiding that "you know that you really should eat fungus, right?" I blame his biology teacher for that...and for not clarifying that some fungus are actually edible and delicious!
Anyhow, if you are interested in reading some of my recent mushroom-Merlot pairings, start with the post Celebrating #MerlotME with Mushrooms, Truffles, and a Wine from a Cal Alumna. But here we go with my Coquilles Saint-Jacques v. 2022... 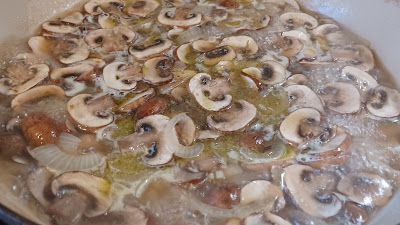 Melt butter in oil in a large skillet over medium heat. Add shallots and sauté until translucent, approximately 5 to 8 minutes. Stir in mushrooms, salt, and black pepper and increase heat to medium-high and cook, stirring often, until mushrooms are beautifully softened and silky, approximately 10 minutes.

Pour wine into the pan and bring to a simmer. Place scallops into wine and poach in the mushroom mixture until barely firm, approximately 2 minutes per side. Move scallops to the baking dish, leaving the mushrooms and liquid in the pan.

Pour cream into the mushroom mixture and bring to a boil. Cook until the sauce is reduced by half. Whisk the egg yolk, then add in a ladleful of the sauce to temper the eggs so it won't scramble. Pour the egg yolk into the sauce and whisk to combine. Stir in tarragon, lemon zest, and 1 teaspoon paprika.

Spoon cream sauce over scallops to coat. Sprinkle with Gruyère cheese and paprika.

Preheat the oven's broiler. Broil in the preheated oven until bubbling and cheese is lightly browned, approximately 5 to 6 minutes. 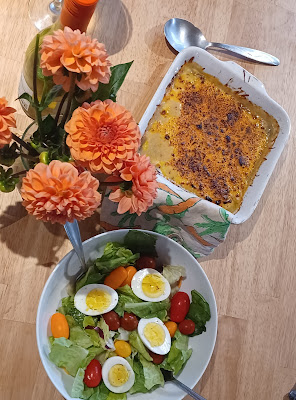 I served this with a simple salad in a mustard vinaigrette and a bottle of French wine...
L'un Des Sens Orange Wine 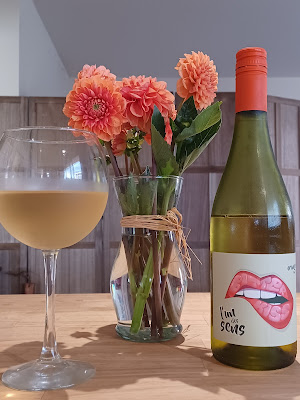 I picked up this wine because I am a longtime fan of orange wines, really 'skin-fermented' wines. You can read more about orange wines in my post Piattino di Polpo e Patate with Skerk's Malvasia in which I poured a skin-fermented wine from Italy. But for the most part, my skin-fermented explorations have been with California wineries: I dove into the skin-fermented pool of Two Shepherds Winery for #WinePW's May 2020 and I am a huge fan of Donkey & Goat's wines, especially their skin-ferments.
So I squealed with glee when I saw a skin-ferment from France and knew that I wanted to feature it for this event. Skin fermented wines are typically heavier than their white wine counterparts, so they are the perfect clash of the seasons wine - when Summer fades into Fall that fare gets a little bit heavier and meat-based.
This bottle is comprised of 70% Chenin Blanc and 30% Melon de Bourgogne. Made in the Loire it is fermented with pomace for five months to create its orange hue. It had lots of citrus on the nose with a sweetness of dried pears or apples. Though it paired well with the Coquilles Saint-Jacques, it was definitely not as orange or funky as I had initially hoped. But it was enjoyable. That's a wrap for the October #Winophiles event. We'll be back next month with Affordable Bourgogne with Cindy of Grape Experiences at the head. Stay tuned for more information.
I am adding this to the October 2022 #FoodieReads link-up.