By Camilla M. Mann September 27, 2021
This is a sponsored post written by me on behalf of L'Ecole.
Complimentary wine was provided for this post and this page may contain affiliate links.
However, all opinions expressed here are my own. 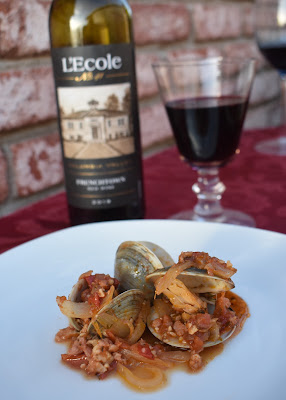 If you're been following my blog, you'll know that I'm doing a series of monthly posts in collaboration with L'Ecole Winery.* A group of us participate in a virtual tasting with their marketing manager, the winemaker, and the general manager and discuss timely topics. This month, we are talking about harvest with their 2019 Frenchtown. And we got to, virtually, meet the new marketing manger, Ben. Looking forward to working with him though we will all miss Marta who is on her new adventure in her home country of Portugal.
L'Ecole's 2019 Frenchtown 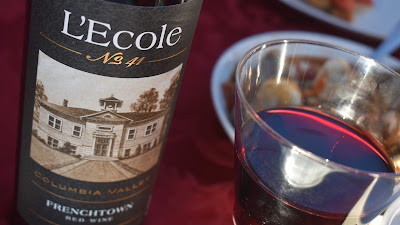 As this is the first red wine released of the season - it comes out about seven months ahead of the other reds - it's fitting that it's the first red wine on which this group is focused. The 2019 Frenchtown is the first red of the new vintage. This used to be called 'Recess Red' but now is named after Walla Walla Valley's first settlement - Frenchtown - that was settled by French Canadians in the early 19th century.
Celebrating those pioneers, at just over $20 suggested retail price, this is a screaming deal. Comprised of over half a dozen Rhône and Bordeaux varietals, Constance characterized this is a cross-section of all their wines. The blend includes 45% Merlot, 18% Cabernet Sauvignon, 10% Malbec, 6% Petit Verdot, 17% Syrah, and 4% Grenache.
The wine pours a brilliant ruby with a rim of gold. On the nose, I jotted down aromas of black and red fruits. The palate is lush and complex with layers of fennel and anise added to the fruits. Those licorice flavors add to the savory feel of the wine and its tannins are positively satiny.
During our Zoom call, Robin of Crushed Grape Chronicles mentioned fruit salsa made with Herbes de Provence. Liz from What's in That Bottle? was thinking about making chili. And David of Cooking Chat suggested a salmon pairing for this lighter red. I can't wait to read about their thoughts and recipes!
Fall al Fresco 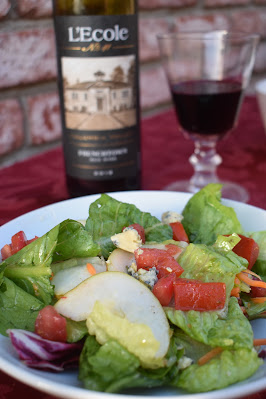 So, the seasons are definitely changing. I actually needed to kick on the heater here on California's central coast this week! But the afternoons and evenings are still warm enough for us to dine on our patio. For the 2019 Frenchtown pairings, I took several dishes al fresco, including a crisp green salad with pears, bleu cheese, and a light mustard vinaigrette. I made steamed clams with bacon and shallots; that recipe will be coming soon. But to really celebrate the changing seasons, I wanted to make something with the last of our summer tomatoes. 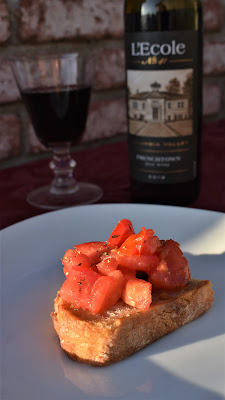 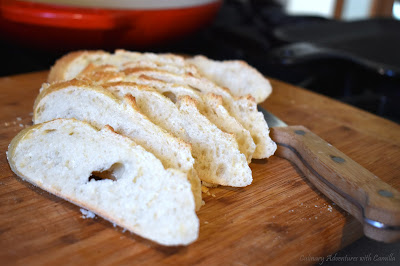 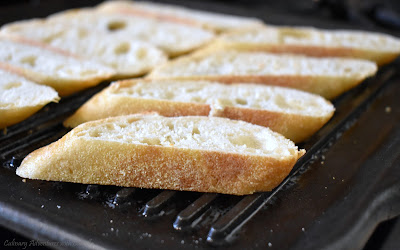 In a small mixing bowl, toss together the tomatoes with a sprinkling of salt and a glug of olive oil. Crush the dried oregano between your fingertips and add them to the tomatoes. Toss to mix and let stand while you grill the bread.
Heat the grill or grill pan and rub slats with butter. Once hot, place the baguette slices on the grill or grill pan. Watch them carefully so they don't burn.  You just want them crisped with nice grill marks.
Place on a serving platter. Top each grilled bread with the tomatoes. Sprinkle with more freshly ground sea salt and drizzle with a splash more olive oil. Serve immediately. 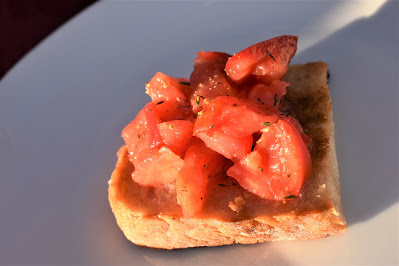 The final quarter of the year will have us exploring more of L'Ecole's red wine. I am especially excited about October's wines in conjunction with #MerlotME. Stay tuned!