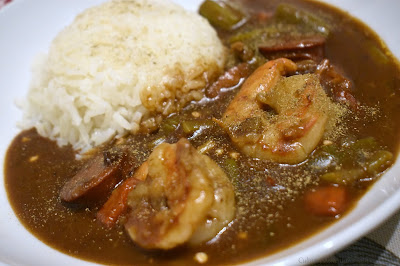 In preparation for our February's #SoupSwappers event, I decided that I was finally going to get to the bottom of the difference between Cajun and Creole gumbo. Given that most of my circles were also confused about the distinctions, I don't feel badly that I was less than informed. But I am fixing that this month.

I started with a Cajun gumbo...and will highlight the differences - and share my Creole gumbo recipe - come February. For now, here's my Cajun gumbo. 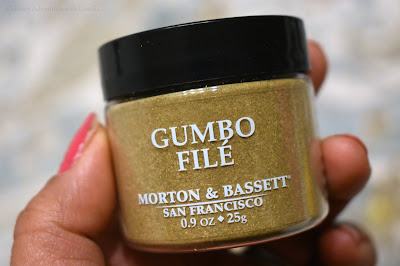 While confusion abounds about the difference between Cajun and Creole, I found that Cajun gumbo is characterized by a deeply hued roux without tomatoes. It's more of a savory gravy with the holy trinity of onions, peppers, and celery, seasoned with cayenne and thickened with okra and filé powder. And the proteins seemed flexible; I opted for chicken, andouille sausage, and plump shrimp. 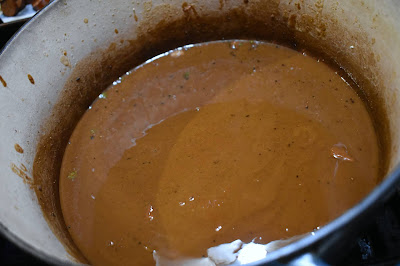 In a large heavy pot (I used my Dutch oven), heat 1 T oil over medium heat until shimmering. Sear chicken until browned on both sides, approximately 4 to 5 minutes per side. Transfer chicken to a plate and let cool. Once chicken has cooled enough to handle it, shred meat into bite-size pieces.

Add sliced andouille to the same pot and cook, stirring, until lightly browned, approximately 5 to 6 minutes. Use a slotted spoon to transfer to a plate and set aside with the chicken.

Add remaining oil to the pot along with the flour. Stir to form a paste, then lower heat to medium-low and cook until the roux is a deep chestnut color. Stir frequently so it doesn't scorch. This process might take about an hour.

In another pot, add onions, bell pepper, celery, and carrots. Cook over medium heat until softened, approximately 6 to 8 minutes. Stir in garlic, cayenne, and a hefty amount of black pepper. Cook for 2 to 3 minutes. Then fold all of that into the roux.

Pour in the stock and add the bay leaves and thyme. Bring to a gentle simmer, then allow to cook uncovered for 1 hour. Stir occasionally so the bottom doesn't scorch. Add in the okra, sausage, and shredded chicken. Cook for another hour. During the last ten minutes, place the shrimp on top of the stew and press down so that they are submerged. Cover to steam the shrimp. Once the shrimp is pink and opaque, remove from heat. 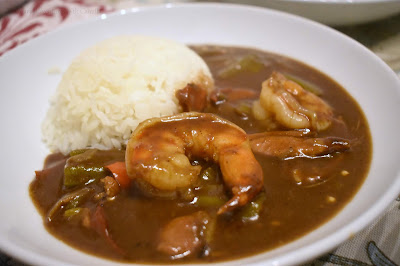 To serve, ladle gumbo into individual serving bowls with steamed rice. Allow diners to sprinkle on more filé and top with hot sauce at the table, if they wish. 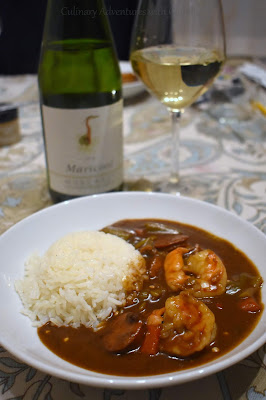 When I was looking for a wine to pair with my Cajun gumbo, I came across the Maricool Muscadet 2018. A white wine from the Loire Valley in France, at less than $5, if was a steal! Made with the Melon de Bourgogne grape, I was pleased that the Muscadet was not, as I had initially thought related to Moscato which I usually find sticky and sweet. 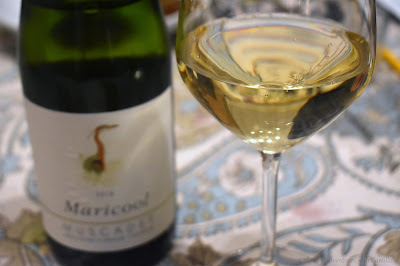 This Muscadet poured a pale straw color. On the nose, it was lightly fruity with a stronger note of lime. Though light-bodied, the wine had balanced acidity and a sensation of savory that was surprising. Its lingering acid was a nice contrast to the almost unctuous gumbo.