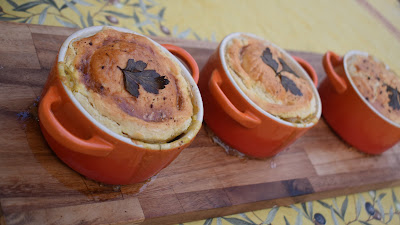 This month the Food'N'Flix bloggers are watching Words on Bathroom Walls. Wendy of A Day in the Life on the Farm is hosting. You can read her invitation here. And I highly recommend this movie. It was completely new to me.
On the Screen 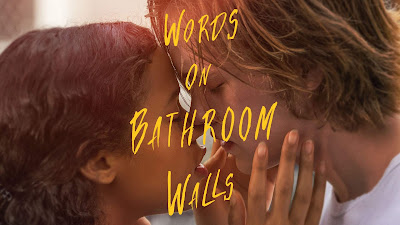 from imdb
I already mentioned that I had never heard of this movie. So, I sat down to watch it when I saw Wendy's invitation. Then I recommended it to my older son who is still home as he prepares to leave for college. Then I watched it with my husband because I was curious about his thoughts. Everyone thought it was well-done with an important message about mental health.
Adam Petrazelli is a teenager who is diagnosed with a schizophrenia. He narrates, "Paranoid schizophrenia. Never goes away. Never normal. The end." He also jokes that he's part of an elite club, namely the 'treatment resistant.'
He is an accomplished cook and aspiring chef; and he has been accepted to culinary school but he needs his high school diploma and he has been expelled due to an episode in which he accidently burned a classmate during a chemistry lab. 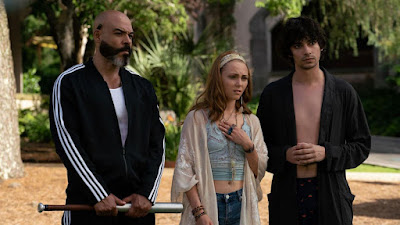 from imdb
This is his story as he enters a new school, a Catholic school run by Sister Catherine, where his admission is contingent on his participation in drug trial for schizophrenia. The pill keeps his visual and auditory hallucinations at bay. Those trio of hallucinations are veritable characters in their own right: Rebecca, a hippie flower child who dances, sways, and floats in on a cloud of patchouli that you can practically smell through your screen; Joaquin, a horny teenage boy who lounges in his boxer shorts and an always open robe; and 'the bodyguard' who is armed with a baseball bat and offers to harm anyone to protect Adam. Actually there is a fourth hallucination, but only those three are anthropomorphic while the fourth is an ominous smoke with a menacing voice who inspires terror in Adam.
At his new school, he attempts to keep his illness a secret and he meets Maya, the class valedictorian and a sassy, spunky girl with a secret of her own: she comes from a blue collar family and has a side hustle writing papers for classmates in exchange for cash. Maya becomes his tutor and she teases him about his food experiences and adventures. Adam told Maya that he attended a cheese camp for his sixteenth birthday; she refers to it as his "Hogwart’s for artisan cheeses."
Eventually they fall in love, but Adam still hasn't shared that he is schizophrenic. In his sessions with his psychiatrist, the audience learns just how much cooking is his salve. "Cooking is the only thing that could make me shut-up," he says. "I cooked and cooked and the meals became my contribution to our underdog story. Plus I got really good at it." And more: "When I’m cooking everything disappears and I get to be exactly who I want to be. I’m in control.
There are many drool-worthy overhead shots of food as he cooks. But I was inspired by the scene when Adam goes to Maya's house and, instead of heating up the TV dinners that her dad promises her brothers, he whips up individual pot pies.
In the Ramekins 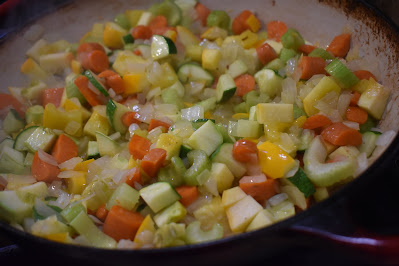 And as Adam quips that for the tuition, the food in the school cafeteria should be farm to table, I used veggies from our CSA (community-supported agriculture) farm in these pies, including summer squash, zucchini, bell peppers, carrots, Chinese celery, and onions. The herbs on top were also from the farm.
Ingredients makes 6 individual pot pies 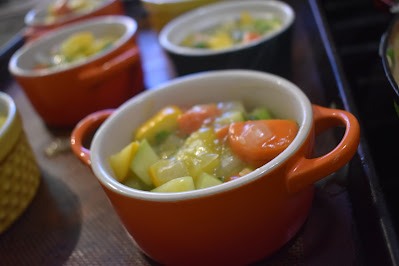 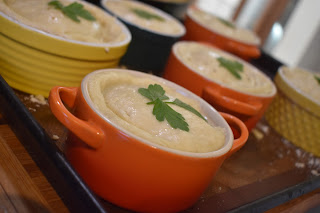 Pâte Brisée
I use a pastry blender and do it all by hand; you could easily give this a whirl in a food processor.
Place the flour, ground almonds, and cold butter in a large mixing bowl. Use the pastry blender until the mixture resembles coarse meal, with pea size pieces of butter. Alternate adding in 1 Tablespoon water and 1 Tablespoon vodka, until mixture just begins to clump together. If you squeeze some of the crumbly dough and it holds together, it's ready. If the dough doesn't hold together, add a little more water and cut again. Note that too much water will make the crust tough. Once the dough comes together into a ball, wrap tightly in plastic wrap and refrigerate for at least 30 minutes before using. While the pastry chills, make the filling.
Filling
Melt the butter in olive oil in a large pot or skillet. Once melted, add the onions, carrots, and celery. Sauté until onions are tender and translucent, approximately 3 minutes. Stir in the bell pepper, zucchini, and summer squash. Stir and cook for 7 minutes.
Sprinkle with salt and pepper. Fold in the herbs and sprinkle flour over the vegetables, stir and cook, to reduce the raw flour taste, approximately 2 minutes.
Slowly pour in the vegetable stock and milk, whisking constantly until the gravy is smooth. Allow the gravy to simmer until slightly thickened, approximately 5 to 6 minutes.
Assembly
Heat your oven to 400 degrees Fahrenheit. Roll the Pâte Brisée out to about 1/3-inch thick and cut into circles that are just slightly larger than the ramekins.
Divide the filling among ramekins, approximately 3/4 cup of filling per serving. Place the crust on top and gently wedge the crust against the ramekin.
In a small mixing bowl, whisk together egg and 1 Tablespoon of milk. Brush the top of the pastry with egg wash. Place an herb leaf on the top, then sprinkle with more salt and pepper, if desired.
Place the ramekins on the baking sheet. Place in the oven and bake until golden brown in color and firm, approximately 25 to 30 minutes. Serve immediately.
That's a wrap on my Words on Bathroom Walls offering. The #FoodNFlix group will be back next month when I will be hosting the group watching Only You. It's a little silly, but I love it and hope that the group finds inspiration in all the Italy scenes. Stay tuned...