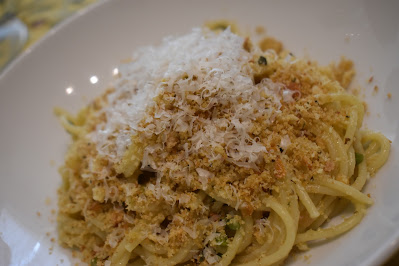 This month, and next, Simona of Briciole assigned the Cook the Books crew 97 Orchard: An Edible History of Five Immigrant Families in One New York Tenement by Jane Ziegelman *. This is a bi-monthly book group, so you have till the end of July to read it and join the party.  You can read her invitation here. 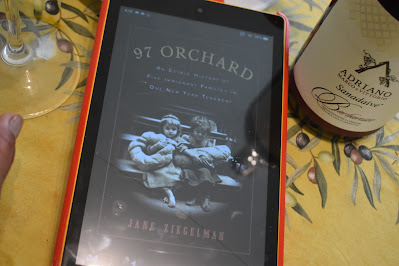 This book looks at the immigrant experience through the lens of five different families, all residents of the tenement apartments at 97 Orchard Street. Irish, German, European Jews, Polish, and Italian families give Ziegelman a framework on which to hang her narrative. From the crowded apartments and the dimly lit stairwells, immigrants gathered and balanced their new lives with preserving culinary traditions from their homelands. Ziegelman explores the immigrants' food cultures in their native lands and examines what did or didn't transfer to the United States or, even more fascinating, how the synthesized or adapted to what was available to them in  New York.
It's an interesting way to chronicle immigrant stories - from the basic perspective of how they nourished themselves. And, as she writes, the kitchen was the center of many, many activities. "A place to cook and to eat, the kitchen was also used as a family workspace, a sweatshop, a laundry room, a place to wash one’s body, a nursery for the babies, and a bedroom for boarders."
I enjoyed learning about "culinary workers [who] have since vanished and are long-forgotten. Among the disappeared are the German krauthobblers, or 'cabbage-shavers,' itinerant tradesmen who went door to door slicing cabbage for homemade sauerkraut; the Italian dandelion pickers, women who scoured New York’s vacant lots for wild salad greens; and the urban goose-farmers, Eastern European Jews who raised poultry in tenement yards, basements, and hallways."

The section about the Jewish immigrants addressed culinary adaptability and adoption. She wrote, "Where most cuisines are anchored to a place, Jewish cooking transcends geography. Spatially unmoored, it is the product of a landless people continuously acquiring new foods and adapting them as they move from place to place, settling for a time, then moving again."

And within the tenement was a spirit of community. "Transactions within the tenement were most often cashless. Neighbors exchanged gifts of food as part of an improvised bartering system in which the poor gave to the truly destitute, or, in many cases, to families struck by tragedy: a death, sickness, a lost job. In return for her edible gifts, the tenement homemaker received the same consideration whenever her luck was down—and no one in the tenements was immune from a run of bad luck." And "Sharing food with neighbors was standard practice among immigrants of every nationality, and in some cases, between nationalities. So, for example, an Italian housewife fed minestrone to the Irish kids who lived on the second floor, while Russians brought honey cake to the old Slovak lady across the airshaft."

While the book is well-researched - and I certainly learned a lot! - it was dry, at times, dragged a bit, and was quite long. I enjoyed the section about Ellis Island because when my grandparents (and parents) immigrated to the United States from the Philippines, they came in on a ship to the West Coast. So, they had a very different experience. Also, Ziegelman's book ends abruptly without a conclusion that ties in all of the threads of the families' stories. 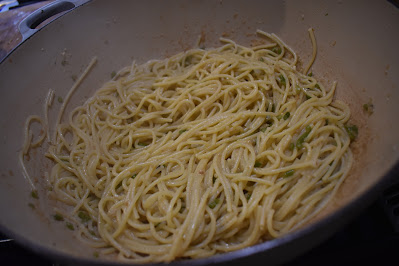 There was an abundance of food mentioned in the book. But, not surprisingly, I was drawn to making an Italian dish. "In the United States today, no immigrant cuisine is more embraced by the American cook, her kitchen stocked with tomato paste, canned tomatoes, jarred marinara sauce, olive oil, parmesan cheese, garlic, and above all pasta, mainstay of the American dinner table." It's not just that...we eat Italian food for most meals since that is the cuisine I learned to cook first!

Initially, I was inspired by this passage about snails..."In the Old Country, Italian women foraged for snails, a free source of precious protein. In America, the snail peddler became a fixture of the Italian pushcart market. His mode of advertising, unique among street vendors, was an upright board with the snails clinging to it. The bulk of his delicate stock could be found in a crate under the pushcart to keep the snails shaded and cool. Italian cooks soaked their snails in cold water, prompting the animal to inch out of its shell, then fried it with garlic, creating a savory and inexpensive topping for pasta." But, in the end, I decided to make spaghetti con aglio e olio because I had all of the ingredients in my cabinet and didn't have snails!

Ziegelman wrote that "[the] pasta recipe below comes to us from Concetta Rizzolo, an immigrant from Avellino, a town east of Naples, who settled in New Jersey in the 1910s." This is very slightly adapted from the recipe as written. I did offer parmigiano-reggiano for serving that isn't mentioned in the recipe nor, likely, something they had access to for a normal family dinner.

Procedure
Pour 1/2 cup olive oil in a skillet and heat over a medium flame. When the oil is warm, add 3 cloves of pressed garlic and 1 cup bread crumbs. Stir and toast until the bread crumbs are a uniform golden brown. Stir in the parsley, then spoon mixture out of the pot and set aside.
In a large pot, boil water for cooking the pasta. Cook spaghetti according to package directions. Drain the pasta but reserve 1 cup of the cooking water.
In the same skillet that you used for the bread crumbs, pour in 1 Tablespoon olive oil and stir in the remaining garlic cloves. Cook over low heat until softened, but take care not to let it brown as that will make it bitter. Add in the chile flakes and cook for another 5 minutes.
Add the pasta to the oil and garlic mixture. Toss until coated and glossy. Stir in 1/2 cup of the bread crumbs and the cooking water, as needed, to loosen up the sauce.
To serve, place individual servings of pasta into bowls. Spoon 1 to 2 Tablespoons of bread crumbs over each serving. Then let diners grate cheese over the top. 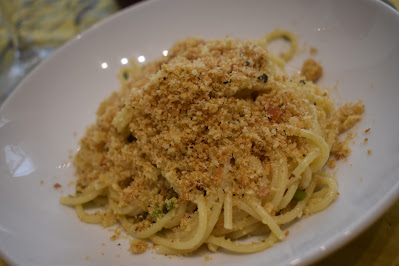 In addition to submitting this to #CooktheBooks, I am adding it to #FoodieReads.
Click to see what everyone else read in June 2021: here.