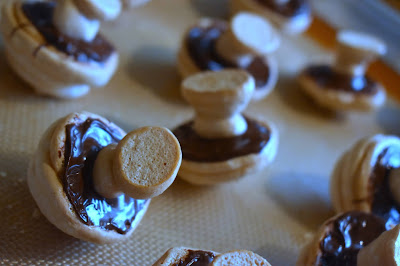 Today the Sunday Funday group is celebrating Midsummer and Faerie mischief is afoot. Thanks to Stacy of Food Lust People Love, Sue of Palatable Pastime, Rebekah of Making Miracles, and Wendy of A Day in the Life on the Farm for coordinating this low-stress group. To celebrate Midsummer, host Sue was looking for: Love potions, faerie cakes, recipes using flowers or herbs, small bites, delicate desserts, or recipes that remind of fairy tales. 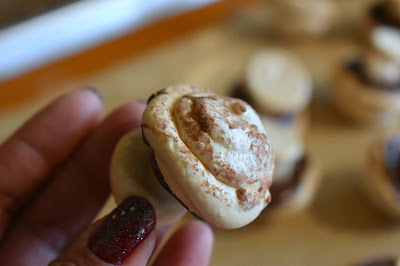 I was inspired by this poem which was written by Margaret Cavendish, Duchess of Newcastle, who died in 1674: The Pastime of the Queen of Fairies. "...Upon a mushroom there is spread..." Here's the poem in its entirety.
Queen Mab and all her Fairy fry,
Dance on a pleasant molehill high:
With fine straw pipes sweet music’s pleasure,
They make and keep just time and measure.
All hand in hand, around, around,
They dance upon the Fairy ground.
And when she leaves her dancing-hall
She doth for her attendants call,
To wait upon her to a bower,
Where she doth sit beneath a flower,
To shade her from the moonshine bright;
And gnats do sing for her delight.
The whilst the bat doth fly about
To keep in order all the rout.
She on a dewy leaf doth bathe,
And as she sits the leaf doth wave:
Like a new fallen flake of snow
All her white limbs in beauty show.
Her garments fair her maids put on,
Made of the pure light from the sun,
From whence such colours she inshades
In every object she invades.
Then to her dinner she goes straight,
Where all her imps in order wait.
Upon a mushroom there is spread
A cover fine of spiders web;
And for her stool a thistle-down;
And for her cup an acorn’s crown,
Wherein strong nectar there is filled,
That from sweet flower is distilled.
Flies of all sorts both fat and good,
For snipe, quail, partridge are her food.
Omelettes made of ant eggs new—
Of such high meats she eats but few.
Her milk is from the dormouse udder,
Which makes her cheese and cream and butter:
This they do mix in many a knack,
And fresh laid ants’ eggs therein crack:—
Both pudding, custard and seed-cake,
Her skilled cook well knows how to bake.
To sweeten them the bee doth bring
Pure honey gathered by her sting:
But for her guard serves grosser meat—
They of the stall-fed dormouse eat.
When dined she calls, to take the air,
Her coach which is a nutshell fair;
Lined soft it is and rich within,
Made of a glistening adders skin,
And there six crickets draw her fast,
When she a journey takes in haste:
Or else two serve to pace a round,
And trample on the Fairy ground.
To hawk sometimes she takes delight,
Her bird a hornet swift for flight,
Whose horns do serve for talons strong,
To gripe the partridge-fly among.
But if she will a hunting go,
The lizard answers for a doe;
It is so swift and fleet in chase,
That her slow coach cannot keep pace;
Then on the grasshopper she’ll ride
And gallop in the forest wide.
Her bow is of a willow branch,
To shoot the lizard on the haunch:
Her arrow sharp, much like a blade,
Of a rosemary leaf is made.
Then home she’s summoned by the cock,
Who gives her warning what’s o’clock,
And when the moon doth hide her head,
Her day is done, she goes to bed.
Meteors do serve, when they are bright,
As torches do, to give her light,
Glow-worms for candles are lit up,
Set on the table while she sup.
But women, the inconstant kind,
Ne’er in one place content their mind,
She calls her chariot and away
To upper earth—impatient of long stay.
The stately palace in which the Queen dwells
Is a fabric built of hodmandod shells:
The hangings thereof a rainbow that’s thin,
Which shew wondrous fine as you enter in;
The chambers are made of amber that’s clear
Which gives a sweet smell when fire is near:
Her bed is a cherry-stone carvèd throughout
And with a bright butterfly’s wing hung about:
Her sheets are made of dove’s eyes skin—
Her pillow’s a violet bud laid therein:
The doors of her chamber are transparent glass,
Where the Queen may be seen as within she doth pass.
The doors are locked fast with silver pins;
The Queen is asleep and now man’s day begins.
Magical Meringue Mushrooms 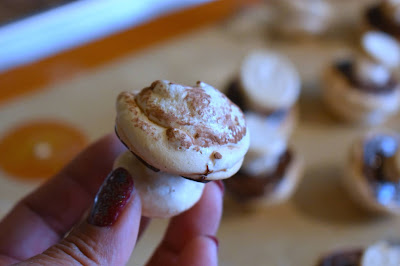 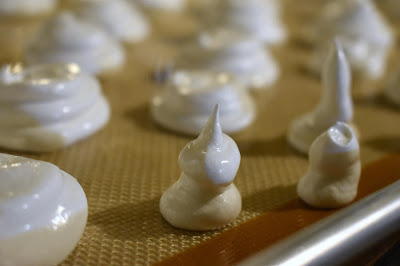 Place a round tip on a pastry bag and fill the bag half way with the meringue. Pipe the caps and the stems. 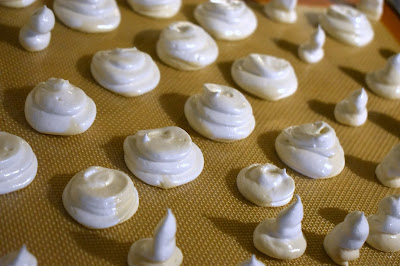 To pipe the mushroom caps, squeeze mounds of meringue onto one of the prepared baking sheets. Pull the bag off to the side to avoid making peaks on the top of the caps. This doesn't have to be perfect! 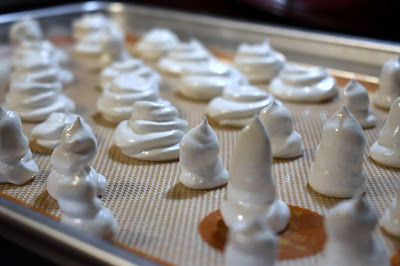 For the stems, press out a tiny bit of meringue onto the sheet, then pull the bag straight up. They should resemble elongated candy kisses. Again, don't fret about making all of the pieces exactly the same. The mushrooms will look more natural if the pieces are different sizes anyway. 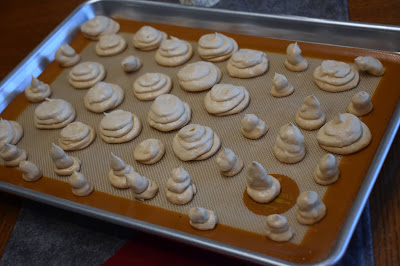 Bake for 1 hour in the preheated oven, or until the caps are dry enough to easily remove from the cookie sheets. Set aside to cool completely. 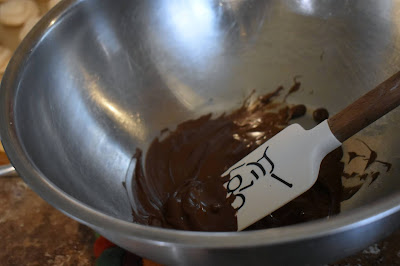 When the mushrooms pieces are completely cool, melt the chocolate in a metal bowl over simmering water, stirring occasionally until smooth. 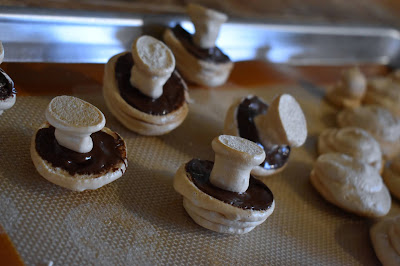 To assemble, smudge the caps lightly with cocoa powder. Then poke a small hole in the bottom of a mushroom cap. Spread chocolate over the bottom of the cap. Dip the tip of a stem in chocolate, and press lightly into the hole. When the chocolate sets, they will hold together. Repeat with remaining pieces. 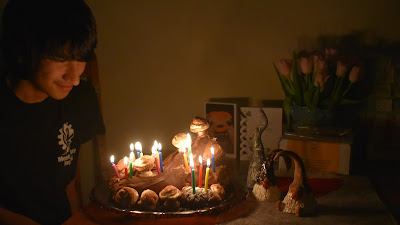 These actually appeared on D's birthday Bûche de Noël back in December. I never posted the recipe because I make it every year. But I realize that I have never posted the meringue mushrooms specifically. Serendipity for this event! 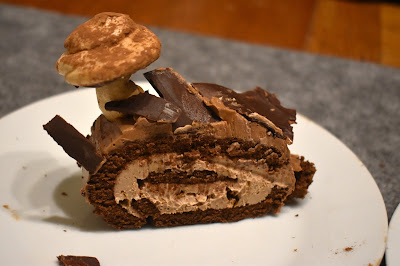 The #SundayFunday group will be back next week sharing summer grilling recipes. I can't wait. Pulling out the grill definitely signifies a slowing down in our schedules, a little more relaxed dinner time, and lots and lots of al fresco meals.