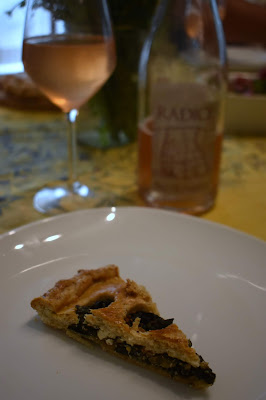 Back in March 2020 - three days before California was locked down with a shelter-in-place order!! - I hosted a birthday dinner for one of my best friends. As it was March 14th - or 3.14 - I opted for a Pi Day menu. Little did I know that that would be the last time in 2020 that I would have friends around my dining room table. It's been a lonely year and a half for sure. 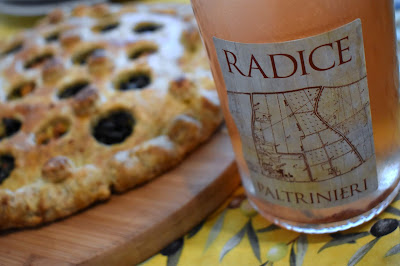 In any case, I opened up a bottle of 2018 Cantina Paltrinieri Radice Lambrusco di Sorbara for the occasion and never had a chance to post about it. But Susannah of Avvinare is hosting the #ItalianFWT group to celebrate World Lambrusco Day, which is June 21st, so this is the perfect opportunity!
If you are reading this early enough, feel free to join the live Twitter chat on Saturday, June 5th at 8am Pacific. Follow the hashtag #ItalianFWT and be sure to add that to any tweets you publish so we can see it. Here's the line-up of the virtual Lambrusco party from the bloggers...
In the Glass 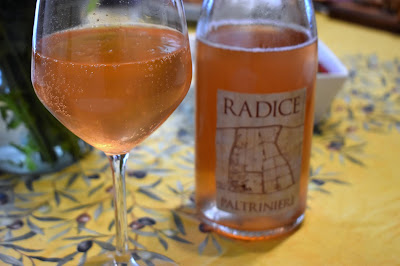 In June 2019, the #ItalianFWT bloggers took a look at Lambrusco. For that, I posted Every Wine Deserves a Second Look: Warmed Brie with MulberryChutney + Cleto Chiarli Lambrusco di Sorbara Vecchia Modena 2018. It definitely opened my eyes to the possibilities of Lambrusco which I had previous viewed only as a frothy pour somewhere between deep magenta and red. And sweet. Always sweet.
So I was thrilled to make the acquaintance of this bottle! It pours a pale salmon pink with very fine and persistent perlage. On the nose I noted aromas of wild strawberries with a hint of orange blossom. And, on the palate, those same notes were present, though the citrus seemed more grapefruit than orange on the tongue. This wine had a crisp acidity and refreshing salinity.
Cantina Paltrinieri has been producing Lambrusco di Sorbara for nearly five generations. The Lambrusco di Sorbara is a DOC in the Emilia-Romagna region for sparkling rosés and reds where the wines come in both frizzante and spumante forms and run the gamut in level of sweetness.
Frizzante and Spumante are common to see on bottles of Italian sparkling wine, what's the difference? Those terms are used to describe varying levels of bubbles. 'Frizzante' is usually used to describe a lightly sparkling wine while 'spumante' usually refers to a fully effervescent wine.
A Lambrusco di Sorbara wine must be at least sixty percent Sorbara but may include up to forty percent Lambrusco Salamino and up to fifteen percent of other Lambrusco sub-varieties.

Achille Paltrinieri began the estate in the early 20th century and continued to run Cantina Paltrinieri with his daughter until 1998 when Alberto, Achille's grandson, and his wife Barbara took over the winery. They opted to produce the first single-varietal Sorbara. To date, they are cultivating in the historic Cristo di Sorbara area between the Secchia and Panaro Rivers. 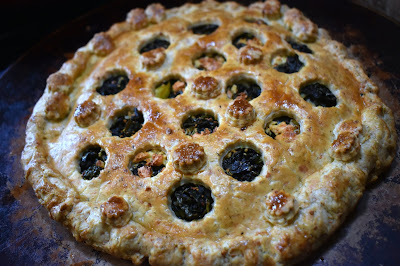 When I started planning a pairing for the Cantina Paltrinieri Radice Lambrusco di Sorbara 2018, I looked to a traditional savory pie that's popular in the Emilia region. Erbazzone Reggiano - known as Scarpazoun in the regional dialect - definitely qualifies as a product of cucina povera, or poor cuisine. It's made with just a few ingredients and the filling is, usually, whatever you have in the garden at the time, but usually some kinds of greens, aromatics, and maybe some cheese.
What solidified scarpazoun as my pairing was that it's usually enjoyed as an appetizer with a glass of Lambrusco. Perfect! 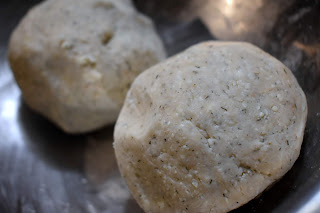 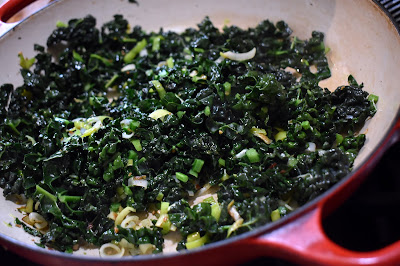 Crust
In the bowl of a food processor, place all of the ingredients for the crust. Pulse a few times until the mixture comes together. You should have pea-sized crumbles. Turn the mixture onto a parchment paper-lined work surface. Knead until you have an elastic dough that doesn't stick to your hands. Divide the dough in two - one for the top and one for the bottom. They shouldn't be exactly half because the bottom does need to be a little bit bigger than the top. Wrap in plastic and place dough into the freezer to chill while the oven reaches temperature and you make your filling.
Preheat oven to 375 degrees Fahrenheit.
Filling
In a large heavy bottom pot, heat your olive oil until it shimmers. Add in the onions and toss to coat with oil. Stir in the greens and the garlic. Cook until just wilted, approximately 4 to 5 minutes. Fold in the herbs and season to taste with salt and pepper. 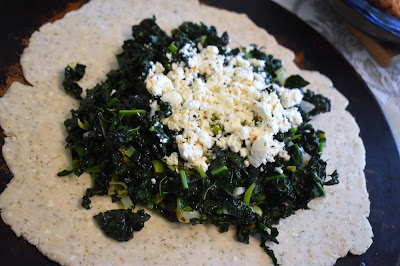 Assembly
Take the dough out of the oven and roll out the bottom crust and place it on a baking sheet or baking stone. Spoon the filling on top of the dough and spread it out evenly, leaving a generous edge. 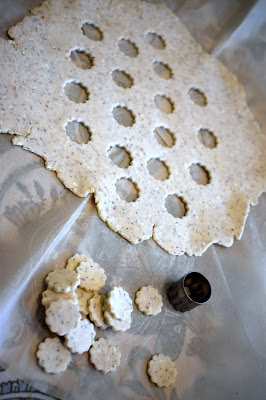 Top the greens with the cheese and roll the second layer of dough for the top. I used a cutter to create some designs; you don't have to do that!
Place the top crust on top of the filling. Fold up the bottom crust and crimp to create an enclosed pie. 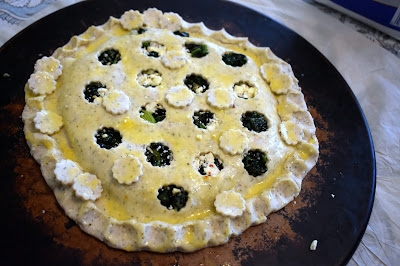 Use a pastry brush to coat the top with a thin layer of olive oil.

Place in the oven and bake for 30 minutes or until the top is lightly golden. Let the scarpazoun cool, then cut it into thin wedges. Serve warm or cold for breakfast, a snack, or an appetizer. We did it as the latter for Jenn's Pi Day birthday celebration.
That's a wrap for Italian Food Wine Travel bloggers' virtual celebration of Lambrusco day. We'll be back in July as Rupal, the Syrah Queen, has us looking at Ramato wines. Stay tuned.