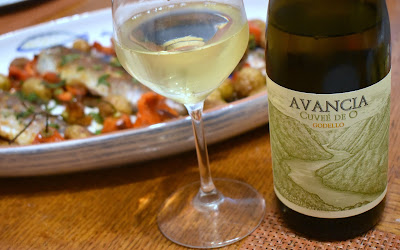 Last month the #WorldWineTravel bloggers took a virtual trip to Rías Baixas. You can read my post: Sopa de Cebolla + 2020 Fillaboa Albariño. But within Galicia are a total of five Denominacións de Orixe (DO): Monterrei, Rías Baixas, Ribeira Sacra, Ribeiro, and Valdeorras. And I wanted to do a little deeper dive into some of the other DOs.
In the Glass 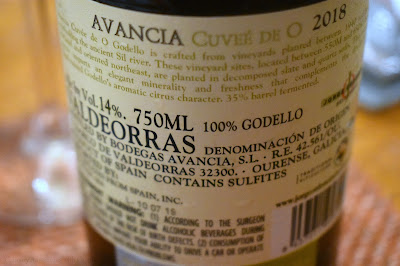 Valdeorras was named for the extensive gold mining that the Romans did in the area. Val-de-Oras is roughly 'valley of gold' in Latin and it is home to two of  Spain's indigenous grapes: Godello and Mencía. Bodegas Avancia lies in the mountains of Valdeorras which has predominantly slate soils.
The estate is small - less than 25 acres - with the grapes being dry-farmed and cultivated organically.  Jorge Ordóñez specializes in working with the Godello grape which is native to northwest Spain. Though DNA profiling of the grape says it is genetically identical to the Portuguese  grape called Gouveio which grows throughout the Douro and Dão. In any case, it was new to me! 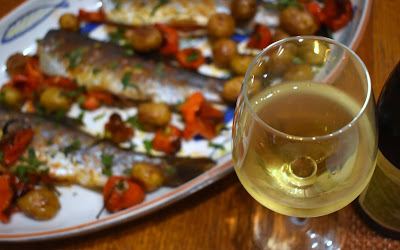 Bodegas Avancia's 2018 Cuvée de O Godello is a  single varietal, composed of 100% Godello grapes. All of the grapes are from vines that are between four and seven decades old. Then it spent six months sur lie with plenty of bâtonnage and it fermented in large format barrels.

In the glass, the wine poured a beautiful sunny gold hue. On the nose, I noted tropical notes of pineapple with an almost dusty floral edge. But on the palate, the wine was bright and balanced with a wet stone tinge on the finish. This was really delicious. 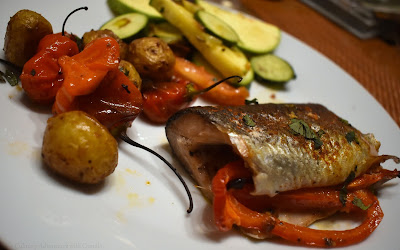 I decided to serve the Godello with an easy roasted fish recipe. Inspired by the Spanish love of peppers, I seasoned  my trout with smoked paprika, stuffed it with sautéed red bell peppers, and served it with roasted baby potatoes and aji dulce peppers from a local, organic farm. 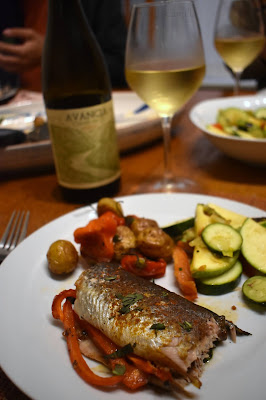 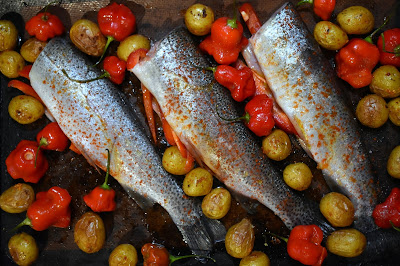 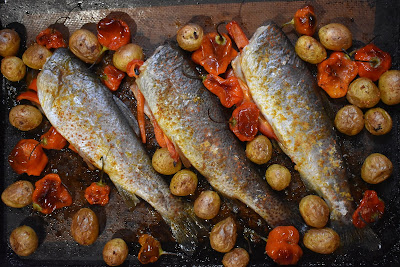 Sauté the bell peppers in a splash of olive oil and set them aside.
Sprinkle the inside cavity of the fish with salt, pepper, and smoked paprika. Place the sautéed peppers inside. You can secure the fish with a toothpick or twine. I just folded it closed.
Preheat oven to 425 degrees Fahrenheit.
Place potatoes and aji dulce peppers in a large mixing bowl. Drizzle with olive oil and sprinkle with salt, pepper, and smoked paprika. Toss to coat. Everything should look nice and glossy. Turn the potatoes and peppers out onto a prepared baking sheet and place in the preheated oven for 15 minutes.
Remove the par-baked potatoes and peppers from the oven. Arrange the fish between the potatoes and peppers. Sprinkle the tops with more salt, pepper, and smoked paprika. Drizzle the entire tray with olive oil and return the sheet to the oven.
Roast for another 20 to 25 minutes - until the flesh is opaque and the skin is browned and crisped. 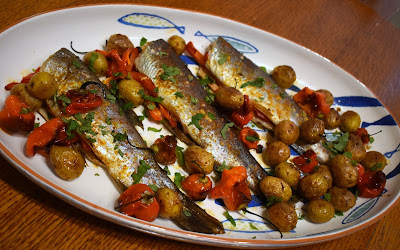 Transfer everything to a serving platter and sprinkle with fresh herbs. Serve immediately.