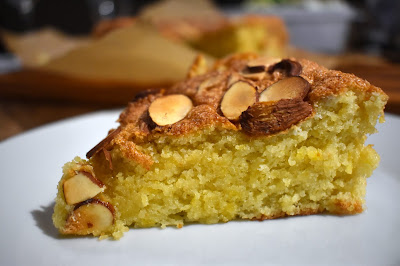 I was in the mood for a breezy read this weekend and found it in the form of Under Almond Blossoms by Anja Saskia Beyer*, translated by Annette Charpentier. And, yes, I did pick it for its cover. I'm easily swayed by a gorgeous cake. This novel was formulaic, but enjoyable nonetheless.
On the Page 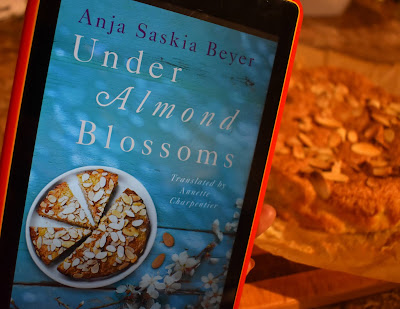 We meet Milla who is about to marry Paul. They live in Germany though Milla believes that her mom, Sarah, hails from Andalusia and that all of her family is long deceased.

However, Milla receives a letter from a notary and goes to the office. She discovers that her maternal grandmother, Abbi, has just passed away a week ago, that her family is actually from Mallorca, and that she has just inherited her grandmother's souvenir shop on the island. "Aaron sounded amazed. ...'Your mother comes from Mallorca. Like your grandmother. Like your whole family going back to the fifteenth century. ...I assume you didn't know that you are of Mallorquín descent? ...And you don't know anything about the history of Mallorca?' 'No nothing.'"

Off she heads to Mallorca to unravel the mystery of why her mother lied to her for all these years and,  hopefully, discover why her grandmother left her a shop when she never even met Milla. Through many twists and turns - and in two different timelines - we learn about the history of Jews on Mallorca who converted to Catholicism. "'Well, you'll find out sooner or later. This particular part of Mallorca's history goes back to the fifteenth century. It was the time of the Inquisition, and everywhere Jewish people were forced to convert to Catholicism. And because Mallorca is an island, everybody knew which families were descended from Jews. They were called xuetes. Originally, it is said to have meant 'pigs'."

We learn about Abbi's history and why she never connected with Sarah: she believed that Sarah was the product of a rape...and not the daughter of her true love, Johan, or even her husband, Baruch. And that maternal neglect trickled down from Sarah to Milla.

But, in the end - yes, spoiler alert! - all ends well with Sarah discovering who her father really is and Milla ending up with Leandro, a Mallorcan, instead of Paul. "Leandro's family was noisy and cheerful. His tall, large  father had immediately hugged her; his  sister, Judith, a petite woman in her late twenties, greeted her with a friendly smile. A few more friends of the family and aunts arrived. Milla wondered fleetingly whether they were all xuetes, but it didn't matter. She felt at home, surrounded by these cheerful people, eating delicious food."

Delicious food certainly plays a roll with these characters. In one of Abbi's chapter: "Her mother had prepared a paella for dinner that evening, and for pudding there were almond biscuits. Abbi had been secretly collecting recipes of dishes and cakes containing almonds and often casually asked her mother for them. Many had been handed down from her grandmother, or even her great-grandmother. Once she had enough recipes, she planned to compile them into a book, submit them to a publisher and present the book to her parents as a surprise. It was her main goal in life: to be a good daughter and to make her parents happy."

Milla finally finds the family and the history she always longed to have. And she honors her grandmother's memory by setting out publish her cookbook. 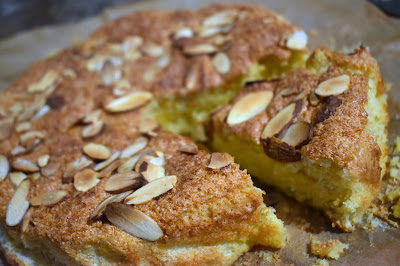 There was quite a bit of food in the book. But I was inspired into the kitchen by the cover photo and this passage: "Milla wasn’t sure what to say next, so she continued along the same theme. 'Why are there so many almond trees on Mallorca?' Now the old man smiled and seemed more at ease. 'Oh, there’s a lovely old story. Would you like to hear it?' 'Yes, please.' Clinging to his stick, he began. 'An Arab prince is supposed to have planted them. He wanted to please his favourite wife in the harem because the princess came from Granada, and she missed the snow in her hometown. She only became happy again when the white almond blossoms were falling from the new trees like snowflakes. Milla and Paul were enchanted. Milla took in a deep breath of the sweet scent."
Ingredients makes one 9-inch round cake 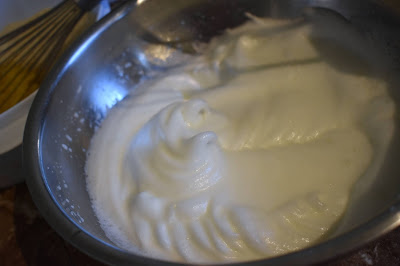 I have made a version of this cake before. But I have honed my cake making skills in recent years. This one had a much more delicate texture and crumb.
Procedure 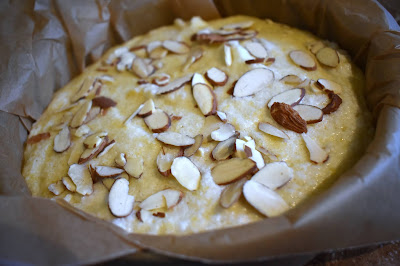 Preheat oven to 350 degrees Fahrenheit. Line a baking pan with parchment paper or grease the pan if you don't have parchment.

Separate the yolks and whites of the eggs into two medium-sized mixing bowls. Add the granulated sugar to the yolks and beat until lightened and fluffy. Fold in the ground almonds in until moistened.

Beat the egg whites into stiff peaks. Then, carefully fold the whites into the egg yolk mixture.

Pour the batter into the prepared pan and scatter sliced almonds over the top. Place in the oven and bake for 30 to 35 minutes, or until a toothpick comes out clean when inserted in the center. 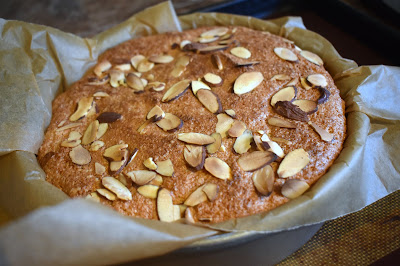 Allow to cool, then serve in wedges.

*This blog currently has a partnership with Amazon.com in their affiliate program, which gives me a small percentage of sales if you buy a product through a link on my blog. It doesn't cost you anything more. If you are uncomfortable with this, feel free to go directly to Amazon.com and search for the item of your choice.
Click to see what everyone else read in June 2021: here.