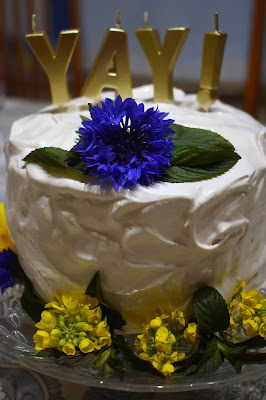 I know that there is a lot of chatter about whether it's inappropriate to wish people Happy Memorial Day. It's a solemn day, right? Yes, it is. Memorial Day is an American holiday - observed on the last Monday of May - that honors the men and women who died while serving in the U.S. military.
But, as I see a growing trend to have celebrations of life that are full of  color instead of funerals that are draped in black, I am opting to celebrate what those who have died for our country are preserving: our freedom. So, if you're in the camp where happiness on this day is not proper, please scroll on by.
This Memorial Day, I am joining a group of online foodies for #MemorialDayBakes. The guidelines included having fun, challenging ourselves, and trying new techniques. Inspired by a recipe in American Cake by Anne Bryn, I thought I'd try my hand at a cake with 'boiled white icing.' I'd never heard of that. Turns out it also goes by 'Italian meringue' which I have made. Oh, well...this was still a delicious cake and I'm excited to post it for today's online event.
This is inspired by the "Frances Virginia Hot Milk Sponge Cake with Lemon Filling" from American Cake by Anne Bryn. I used my Lemon Curd recipe instead of her lemon filling. I was going to try for a red, white, and blue decorated cake, but I didn't find any organic, edible red flowers. So, I went with what I had and put Jake in a red t-shirt for some of the photos.
Ingredients makes a three-layer six-inch cake 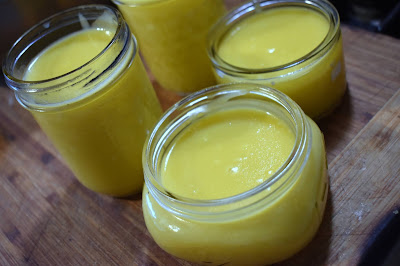 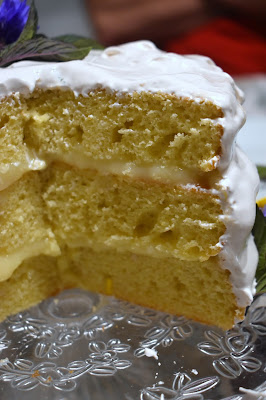 Hot Milk Sponge Cake
Preheat oven to 350 degrees Fahrenheit. Line three 6-inch baking pans with parchment paper and butter the sides. Set aside.
Beat the eggs in a large mixing bowl until yolks are broken up. Add in the sugar and beat until lightened and fluffy, approximately 3 minutes. Sift in 2 cups of flour and beat until just combined, approximately 1 minute.
Place the milk and butter in a medium saucepan and heat until the butter melts and the mixture begins to steam. Slowly pour the hot milk into the batter, beating until smooth. Add in the remaining flour, baking powder, vanilla, and almond extract. Beat until just combined. Divide the batter between the prepared  pans and place in the oven.
Bake until the layers are lightly golden brown, approximately 22 to  24 minutes. Remove the layers from the oven and cool in the pan for 5 minutes. Invert onto a wire rack and let cool completely.
Boiled White Icing
Place 1 cup sugar, water, cream of tartar, and salt in a small saucepan over medium-high heat. Stir to combine, then cover and bring to a boil. Once the mixture is boiling, remove the cover and attach the candy thermometer to the side of the pan.
In the meantime, place the egg whites in a clean mixing bowl and beat them until they form stiff peaks, approximately 4 to 5 minutes. Add in 1 Tablespoon sugar and beat until stiff peaks form again. Set aside.
Once the syrup on the stove reaches the soft-ball stage - at about 238 degrees Fahrenheit - pour one third into the egg whites and beat until combined. Return the pan to the stove and raise the syrup temperature to 244 degrees Fahrenheit. Pour one half of that syrup into the egg whites and, again, beat until well-combined. Return the pan to the stove one last time and raise that syrup again to 250 degrees Fahrenheit.
Beat in the final addition of syrup, powdered sugar, and vanilla until incorporated. The icing should be thick and glossy. 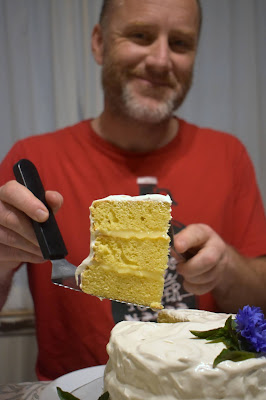 Assembly
To assemble the cake, place 1 layer on a cake platter and spread lemon curd to within 1/2-inch of the edge. Position the second layer and repeat filling process. Top with the third layer. Spread boiled icing on the cooled cake layers immediately. Garnish with organic flowers, if using. Serve immediately. 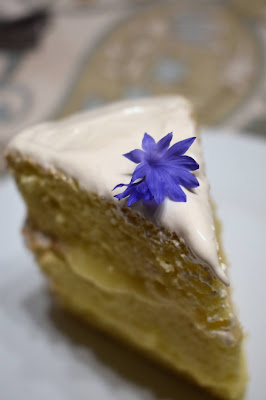 What a fun collaboration. I'm looking forward to exploring all of the other #MemorialDayBakers' posts.