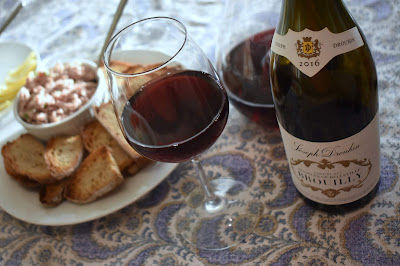 This month the French Winophiles are exploring Cru Beaujolais with Cindy of Grape Experiences at the lead. You can read her invitation here.

If you are reading this early enough, feel free to jump into the discussion. We'll have a live Twitter chat on Saturday, May 16th at 8am Pacific. Follow the hashtag #Winophiles and be sure to add that to your tweet so we can see it. Cheers! In the meantime, here's the line-up of the Cru Beaujolais articles that will go live between Friday, May 15th and early morning Saturday, May 16th. 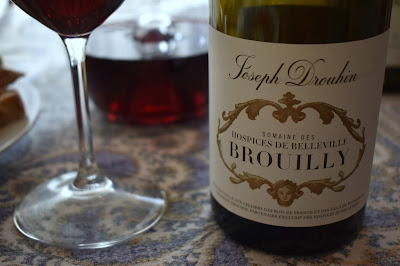 About the area...what makes Beaujolais distinctive is its variations on style of a single varietal: Gamay. Culivation of the Gamay grape used to be more widespread throughout Burgundy until the July 1395 edict of Philip the Bold, Duke of Burgundy; he banished the grape to make room for Pinot Noir. If you're interested in that story, search for it. I laughed and laughed at the different accounts. But it certainly changed the face of winemaking in France.

About my bottle...even though we're entering out third month of being sheltered in place, I was able to track down this bottle online: Joseph Drouhin Hospices De Belleville Brouilly 2016.

Established in the latter part of the 19th centure, Maison Joseph Drouhin has solidified its reputation for creating wines that reflect their individual terroir and vintage. Using a balance of traditional and modern techniques, Maison Joseph Drouhin is 100% hand-harvested and utilizes both open vessels and oak for fermentation and aging. And in 2009, the estate earned its organic certification. So all of the wines are certified organic after the 2009 vintage! 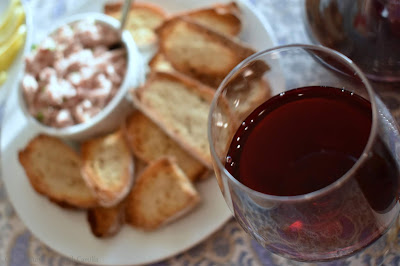 This Brouilly pours a deep, brilliant reddish purple. On the nose, there were delicate peppery notes with aromas of ripe plum. On the palate, there was a pleasing blend of sweet and bitter with nicely balanced tannins. 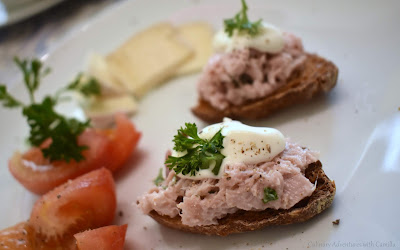 I initially considered making a chicken liver pâté with which to pair the wine. But I had some tuna fillets in the fridge that needed to be used and thought: tuna rillettes. Then I realized it wasn't technically a rillette since it wasn't packed with a layer of fat to preserve it. So, tuna pâté it was. The a-circumflex means that there used to be an 's' following the a. So, pâté was pasté. Pâté is simply, and literally, a paste. 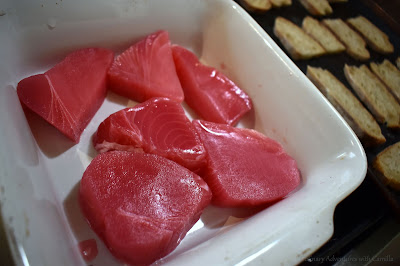 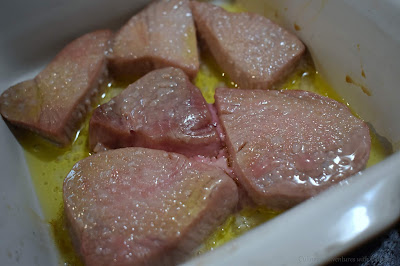 Preheat the oven to 400 degress F. Place the tuna in a baking dish and brush the tops with olive oil. Sprinkle with salt and pepper and place in the oven.

Bake until it's firm to the touch, approximately 10 to 12 minutes, but this will depend on the thickness of your fillets. Remove tuna from the oven and let it cool completely.

In a medium mixing bowl, flake tuna into small chunks. Add crème fraîche and lemon juice. Stir to combine, gently mashing the tuna as you mix. If it's too dry, drizzle in some olive oil, as needed.

Stir in the shallots and herbs. Season to taste with salt and pepper. Cover the bowl and refrigerate to let the flavors meld - at least an hour, but as long as overnight. 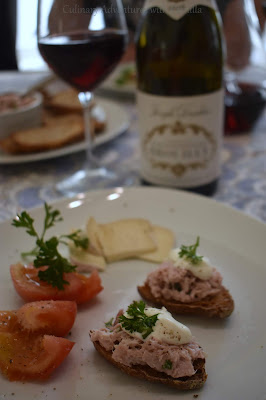 When ready to serve, remove pâté from the fridge and enjoy on a slice of toasted baguette. I offered more crème fraîche and fresh parsley for the top. 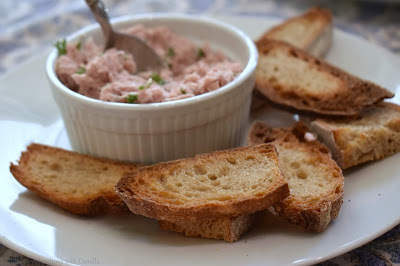 That's it for our Beaujolais exploration. Next up for the French Winophiles: Gwendolyn of Wine Predator is hosting an event about the unexpected pleasures in Champagne. You can read her invitation here. I'm not sure I'll be able to source anything if we're still sheltered in place, but I'll try! Cheers.