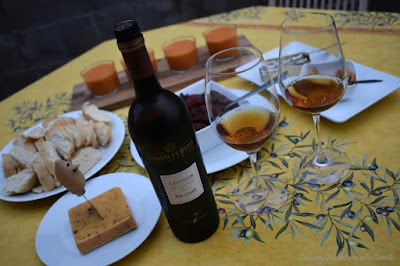 I have never heard of this author, but much like Netflix's "picked for you" suggestions, my e-reader does the same and The Victory Garden by Rhys Bowen* popped up. Okay. Not much else to do these days while we enter our third month of sheltering in place.

Reading seems a good way to pass the time. I actually had heard the term 'victory garden' recently - in relation to D's garden project and thought it would be more about cultivating a garden during a crisis. But it was more of a historical fiction set in a time and place with which I am woefully unfamiliar. So, I was happy to learn more about women's roles in the Great War all wrapped up in a compelling story about  middle class woman who wants more than the plush moneyed life her parents are offering...along with all the strings and familiar obligations that go along with that privilege. 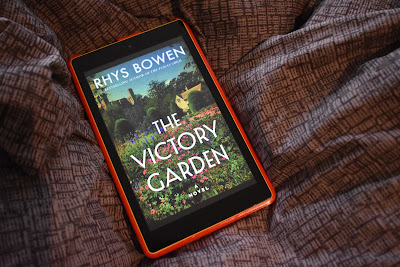 Bowen transports the reader to 1918 Torquay, on the Southern coast of England, where we meet Emily Bryce who is just about to turn 21. Tired of being under her parents' thumbs, she is eager to help with the war effort and volunteers for the Women's Land Army. If you have never heard of this, as I hadn't, it was an initiative by the British government to support local farms. Women enlisted and were trained in skills from planting, harvesting, haying, milking, and more. Whatever was needed on a farm because the male workforce was off fighting a war, these gals learned and performed.

Needless to say, her parents are horrified that she deigns to get her hands dirty and they disown her. So we follow Emily, along with her group of Land Army cohorts - Daisy, Alice, Ruby, and Maud - through their lives. In the meantime, Emily's Australian boyfriend is killed and she is left pregnant with their child and unmarried though they were engaged.

Emily ends up being dispatched to the Charlton estate which is in need of a gardener. She lives in the gardener's cottage and befriends the lady of the manor. Lady Charlton agrees to keep Emily's secret, going so far as to suggest that she present herself as a War Widow - Mrs. Robbie Kerr - instead of the pregnant, unmarried girl, Emily Bryce.

So that's the framework of the novel on which Bowen hangs issues of the stigma of unmarried, pregnant women, class clashes, allegations of witchcraft, the Spanish flu epidemic, and many more meaty topics. The web of relationships she weaves between all the characters is both enjoyable and informative. I will certainly be looking for out for more books by Bowen.

There was actually quite a lot of food mentioned in this book. Emily and her mother bring trays of sweets to a home where injured soldiers are convalescing. "...[The] selection of cakes was arranged on the platters, and her mother went off like a ship in full sail, with Emily trailing behind. 'Good morning, gentlemen. A selection of my home-made baked goods to cheer you up and remind you of your own homes,' Mrs Bryce said as they entered the first ward. 'Oh yes, do try the iced bun. An old family recipe, you know.'" The convalescent home is where Emily meets her beloved Robbie.

When her mother is planning her twenty-first birthday party, they discuss the offerings. “'I’ve been thinking, Emily,' she said. 'If the weather remains this favourable, we may just hold your twenty-first party outside—lanterns in the trees, ice creams, violins by the fountain...'."

The food at the party is even used as a way to differentiate the classes, those who have and those who have not. "'What’s that?' Jimmy went over to a dish in the shape of a big fish. It was pink and shiny and decorated with sliced olives. He dipped his finger into it and popped it into his mouth. 'It’s fish paste,' he said with distaste. 'It is salmon mousse,' Mrs Bryce said in a cold voice, appearing in the doorway behind them. 'We were fortunate enough to acquire a piece of salmon from Fortnum and Mason in London'."

But as Emily moves to the farm where she trains for the Women's Land Army, the food grows more utilitarian and less fancy. The girls get hunks of bread and cheese at lunch and heavy, hearty stews for dinner. When she returns home for a visit, she tells her parents, "'Actually, we’ve been eating quite well,' Emily said as she followed her mother into the sitting room. 'Lots of stews. And plenty of rabbit.' 'Rabbit? How disgusting.' 'Well, they are a pest on the farms, so we’re doing everyone a favour by eating them,' Emily said. 'Rabbit stew really isn’t bad'." 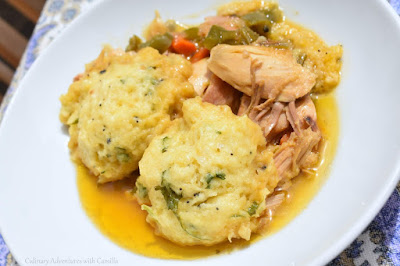 If I had any rabbit in the freezer, I would have made some rabbit stew because it's a family favorite. My boys love any kind of Rabbit and Dumplings! 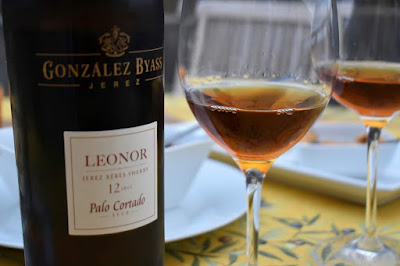 And if I were more daring, I could have done some research to see what it would take to make any of Mr. Patterson's wines. Maybe one of these days...


He says to Emily, "'Perhaps you will be good enough to share a glass of my parsnip wine one evening. I am rather proud of my home-made wines, and the parsnip is particularly fine, I believe.' Emily began to think that her evenings would never be her own, but the man had a guardedly eager look on his face. 'I’ve never tried parsnip wine,' she said, 'but I’d be delighted to sample it.' The parsnip wine was surprisingly potent, and Emily gave a little gasp as she took a sip. 'Yes, it does have a kick to it, doesn’t it?' Mr Patterson looked pleased. 'My nettle wine was, alas, rather a failure this year. The elderberry wine was not bad at all, but the parsnip is my pièce de résistance, as they say'."

But, in the end, I was inspired by Emily's evening sherry with Lady Charlton. "They had a hearty vegetable soup and cold pork pie for their midday meal, then Emily went back to work. She was interrupted by Simpson with a message from Her Ladyship. Would she take sherry and dine with her that evening?" The sherry becomes a ritual; after dinner, she joins Lady Charlton for a drink and some conversation.

I was reminded of a sherry tasting I did years ago and thought I'd share that I know about sherry as I used to think it was just for cooking. I might have to start having nightly sips of sherry just like Emily and Lady Charlton.


Hopefully no one is as clueless as I was. But, just in case, bear with me. Sherry is fortified wine from the southwest part of Spain; it comes in a range of styles - dry, straw-colored or sweet, mahogany-hued or somewhere in between. Dry sherries are usually served chilled while sweet sherries are served at room temperature.

My favorite was Leonor, a beautiful Palo Cortado sherry. In the glass, the Leonar pours a rich, amber color with golden highlights and an orange rim. On the nose, we got nutty aromas of roasted chestnuts and toasted almonds. And, on the tongue, this wine was powerful, well-balanced, and made me think of salted caramel that's more salty than sweet. What a delicious sip! 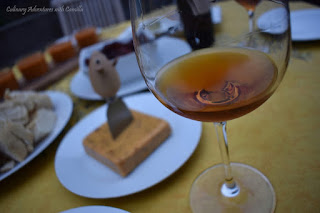 Are you a sherry aficionado? Would love to hear what you know.