The Paris Architect, Three Lives of a Roasted Chicken, and an E-Reader #FoodieReads 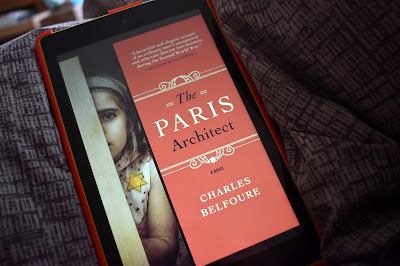 This shelter-in-place order has my reading patterns swinging from one extreme to the other. On one hand, early on, I couldn't focus on finishing a book. For the entire first month of staying at home, I barely read more than five pages in a sitting. Then, after the first month, I started feeling a little more normal and started going through the book pile on my nightstand. With our libraries being closed, buying physical books from Amazon was getting ridiculously pricey. So, I bit the bullet and ordered a device on which I could read ebooks.

I finished the first book in just two days and have been steadily reading since I got it. One thing: Jake loves that I can read in bed without having a light on. So, I guess the e-reader was a good investment. In preparation for my June French exploration of pages and pours, I read The Paris Architect by Charles Belfoure.*

On the Page
We meet Lucien Bernard who is a French architect living in Nazi-occupied Paris. And, from the onset, he was fairly despicable. He is in a loveless marriage and keeps a mistress on the side. He only seems interested in making money and augmenting his reputation as an architect.

“While the French outside were getting by on scraps and acorn coffee, Le Chat Roux offered a choice of six kinds of fish or oysters, a bouillabaisse, rabbit, chicken, fruit salad, and even pineapple with kirsch. Having money was a wonderful thing, thought Lucien.”

Lucien gets a commission to design hiding spaces for Jews. Initially, he's in it solely for the money, but as time goes on, outwitting the Nazis and actually saving Jewish lives grows increasingly important to him.

This is a tough book to read or rather it's a difficult subject to stomach. And Belfoure is unflinching in his portrayal of the animal nature of man, of traitors, of spies, and of Nazis. However, the darkness is tempered with a sense of hope and eventual redemption. The book was good; I will certainly keep my eye out for future works by the author. 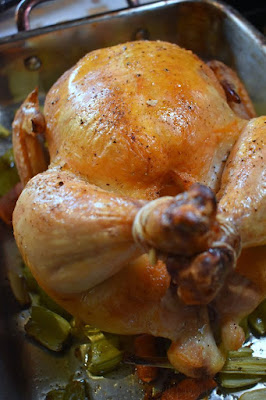 For a historical fiction, there were several passages about food that were striking.

“There was a shortage of everything. A Frenchman who insisted on an omelet made with at least a half-dozen eggs was hard-pressed to get one egg a month. Rationing had severely limited meat, milk, eggs, butter, cheese, potatoes, salt, and fish. Real coffee didn’t exist, so Celeste, like all Parisians, had experimented with acorns and dried apples, with little success. For some reason, carrots and roasted chestnuts were always plentiful so they made their way into every dish one could imagine. Adults had to survive on a measly 1,200 calories a day, with only 140 grams of cheese a month. People in Paris were always hungry. Food was all they thought and talked about.”
“After the cinema, they took a velotaxi to Le Chat Roux, where they could get all the hot food they wanted—for a steep price, of course. But Lucien enjoyed himself immensely watching Pierre wolf down potatoes, rabbit, fresh bread, and an éclair.”

But what inspired me into the kitchen was this paragraph...

“Lucien was quite proud he’d procured a roasted chicken for tonight’s supper. It had cost him a pretty penny—twenty times more than what it would have cost in peacetime. But it was worth it. He knew Pierre would smell the delicious aroma the minute he came through the apartment door and come running. That sight alone was worth the money.”

I roast a chicken almost every week. It's a great way to stretch a high quality protein into multiple meals. First, it comes to the table like this: roasted. We carve off pieces and eat our fill. 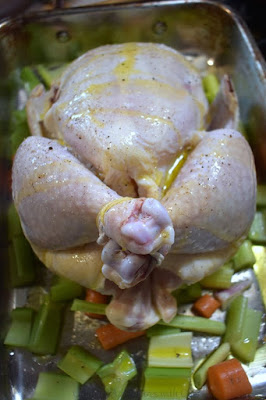 After that first meal, I shred the meat from the bones to include in chicken salad sandwiches or to fold into an omelette. 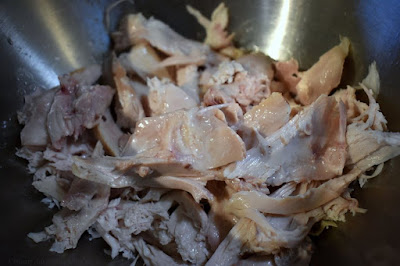 Then, the carcass goes into a souppot - along with the veggies that were roasted beneath the chicken - to be simmered into a bone broth. 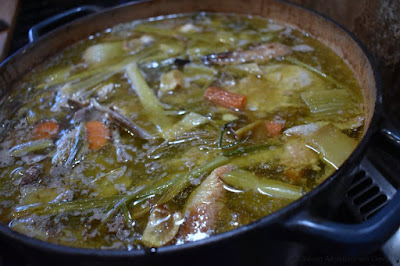 This is my go-to recipe for roasted chicken...

Procedure
Preheat oven to 425F°. Scatter the carrots, onion, and celery pieces in the bottom of a roasting pan.

Dry the bird, inside and out, and stuff with the lemons. Truss the legs with cotton twine. Sprinkle with salt and pepper.

Place the chicken, breast side up, in the center of a baking dish, on top of the veggies. Drizzle with olive oil and cover with foil. Roast for 60 minutes. Raise the oven temperature to 450F°. Uncover and roast until the skin is golden brown and crisped.

You want the internal temperature of the thickest part of the bird to be about 165 degrees. My 5 pound chicken usually takes about 75 minutes total - 60 minutes (covered) at 425F° and another 15 minutes (uncovered) at 450F°.

Once your chicken has reached the proper temperature, check with a thermometer to be sure, remove the chicken from the pan and flip it breast-side down so that the juices flow into the meat. Let it rest like that for 15 minutes before carving.